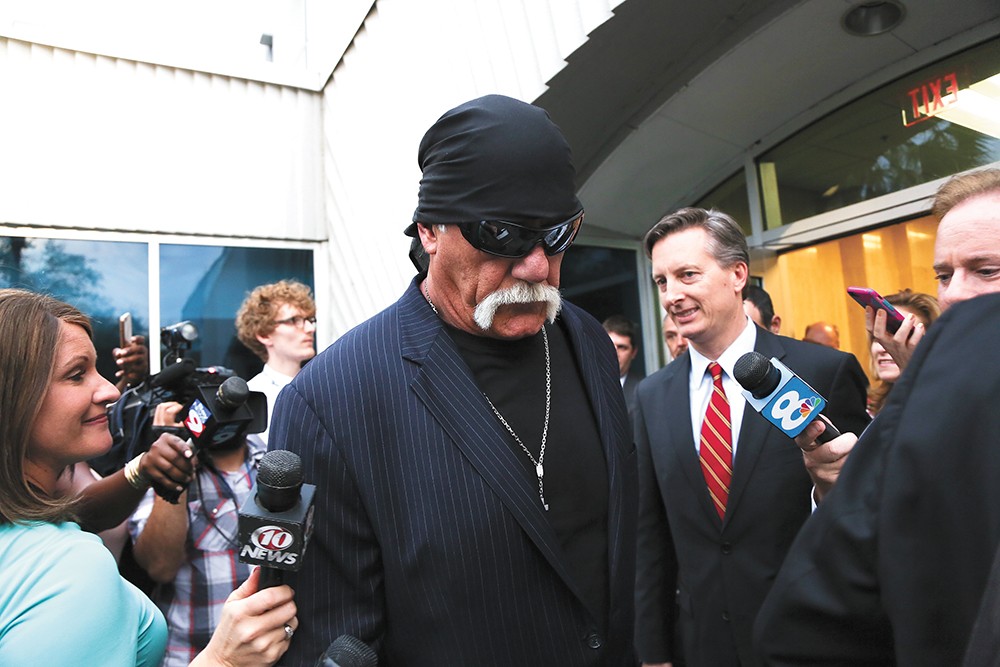 In 2015, Hulk Hogan sued the news and gossip website Gawker for posting a sex tape featuring the professional wrestler in compromising positions with the wife of his best friend, a radio DJ known as Bubba the Love Sponge. The jury awarded Hogan $140 million in damages; Gawker crumbled. It was perfect tabloid fodder.

Despite the ridiculous elements of the trial — just watching Hogan on the witness stand, dressed in all black (including his trademark bandana) and solemnly explaining the tenets of Hulkamania, is enough to make you scoff — it turned out to be a tremendously important First Amendment case. It's quintessentially American in its mix of absurdity, prurience and voyeurism; how appropriate that the sexual proclivities of a C-list celebrity would shake the very tenets of the free press to its core.

The new documentary Nobody Speak: Trials of the Free Press, currently streaming on Netflix, uses the Gawker lawsuit as its theoretical jumping-off point. It then zooms out (perhaps not quite far enough) to explore how the case is symptomatic of a much larger, thornier issue facing journalism at a time when any story that pushes back against your personal ideology must, then, be fake.

The details of the Hulk Hogan v. Gawker case do, in fact, read like an article from The Onion. Hogan (real name Terry Bollea) reportedly knew he was being filmed, and he later joked about the tape to Howard Stern. But per Bollea, the guy bragging about his sexual performance to a morning shock jock was the character Hulk Hogan, not the real Terry Bollea, who was, he says, personally traumatized by the leak.

The Hogan trial eventually bankrupted Gawker and its co-founder Nick Denton. So how could the Hulkster, who wasn't exactly at his peak while all this was going down, possibly afford his expensive legal counsel?

Well, it turns out his case was bankrolled by tech mogul Peter Thiel, who Denton believes was disgruntled about Gawker's coverage of his mishandling of a multimillion-dollar hedge fund. (The website also, it should be noted, outed Thiel as gay.) Was Thiel using Hogan as a pawn in his plan to destroy Gawker? And is it possible that Bollea's real intention in suing the site was to suppress the complete tape, in which he casually tosses off racial epithets? Either way, Hogan was painted as a larger-than-life martyr, and Gawker the Big Bad Media's most ruthless representative.

The irony of all this, not totally lost on Nobody Speak director Brian Knappenberger

, is that Gawker was itself founded on a mistrust of mainstream media. Its mission was to deflate what its founders saw as the implicit self-importance of journalism, to cover, according to Denton, the "great stories that weren't being written about ... without access, favor or discretion." John Cook, Gawker's former executive editor, says on camera that his mission at Gawker was "to look at people who were full of shit... [and] give them the what for.

"If you're not pissing off a billionaire, then there's not much point," he says.

Admirable intentions, perhaps, but how does that adherence to tenacious, anti-establishment reporting relate to questionably obtained footage of a washed-up wrestler caught in the act? Is that really the journalistic hill Denton wants to die on? Not everyone was a fan of Gawker's salacious methods, or of the snarky, often condescending tone its writers frequently adopted: David Carr, a New York Times columnist who died in 2015, likened the outlet to high school mean girls, putting their enemies on blast while cowering behind computer screens.

But that's the most withering criticism Nobody Speak offers up, and that seems disingenuous at best. There's no mention, for instance, of Gawker's controversial 2015 post about a married Condé Nast executive's dalliances with a male escort, a post that generated plenty of publicity, apparently created a rift amongst Gawker staff and resulted in several editors resigning. Knappenberger doesn't get anywhere near it, probably because it would have punctured his simplistic David-and-Goliath narrative.

Of course, one can be a vociferous critic of Gawker and still lament the way in which it was brought to its knees. If someone like Thiel, who has been outspoken about his shortsighted, Ayn Randian worldview, can aid in destroying a media outlet, which one is next?

and shifts his focus instead to the Las Vegas Review-Journal, which was purchased by billionaire Sheldon Adelson just months before the Hogan v. Gawker verdict. According to the paper's former editors, Adelson discouraged the Review-Journal from pursuing stories that could potentially damage his business dealings or expose his questionable ties to various Republican political campaigns. The Review-Journal writers who refused to acquiesce eventually found themselves jobless.

It's a terrific and infuriating story about the dangers of commerce influencing the press, though its relation to Gawker is tenuous. It feels too much like an afterthought: Knappenberger should either have fleshed out the Review-Journal story more or found a third scenario supporting his thesis.

But what Nobody Speak argues, and quite convincingly, is that one-percenters have no business telling us what we can and can't print. And while that might seem like a painfully obvious point (does anyone but the one-percenters disagree?), perhaps we need that reminder in a time when our president, who has the money and firepower (including Thiel and Adelson) necessary to take down a thousand Gawkers, is tweeting GIFs of himself literally body-slamming a figurative CNN. I wonder what Hulk Hogan — make that Terry Bollea — thinks of that. ♦