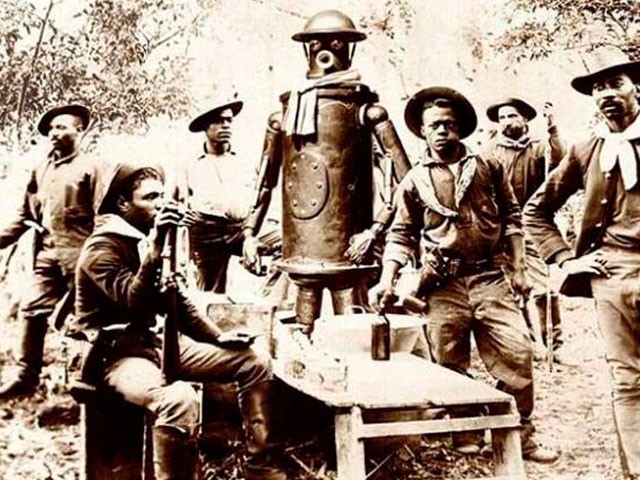 To the victors, they say, go the spoils — and the chance to write history any old way they want.

That’s why some busybody member of the “powers that be” club can airbrush out a key member of America’s pantheon of heroes. And I’m not talking about some secret agent; it’s an all-American robot (yes, robot!) named Boilerplate. It’s a sad situation.

It takes a husband-and-wife team of comic book artists to finally uncover these facts. Where are our “so-called” mainstream historians on this one? Well, Paul Guinan and Anina Bennett (who live in Portland — cool!) have blown the lid off this cover-up with a courageous, beautiful book that details our steel-bellied friend’s contributions to all our freedoms.

Boilerplate wasn’t always a secret; as this book proves, he was all over the cultural landscape around the turn of the 20th century. There he is hanging out with Teddy Roosevelt on page 72 and fighting alongside Pancho Villa on page 102.

Professor Archie Campion, who wanted to eliminate the human suffering part of war, introduced his plated protégé to the world in 1893. After his Victorian-era wonder traveled to Antarctica, Hawaii and the Klondike — I know, it almost sounds like it’s made up! — Campion lent Boilerplate to the war effort. Between 1898 and 1918, Boilerplate served with Roosevelt’s Rough Riders in Cuba and under General John Pershing in World War I. Sadly, on Oct. 7, 1918 — somewhere in the Argonne Forest, just after punching through the German lines to help rescue Major Whittlesey’s Lost Battalion — Boilerplate disappeared.

As Guinan and Bennett show through their meticulous research, our world would have been a very different place without Boilerplate. (Like maybe I’d be writing this book review in Spanish or German. Think about that for a minute.)

And how did we thank Boilerplate? We forgot him. Yeah, that’s messed up. So thanks, Paul and Anina, for reclaiming this weighty chunk of our “real” history.