Senior volunteers teach little ones how to read 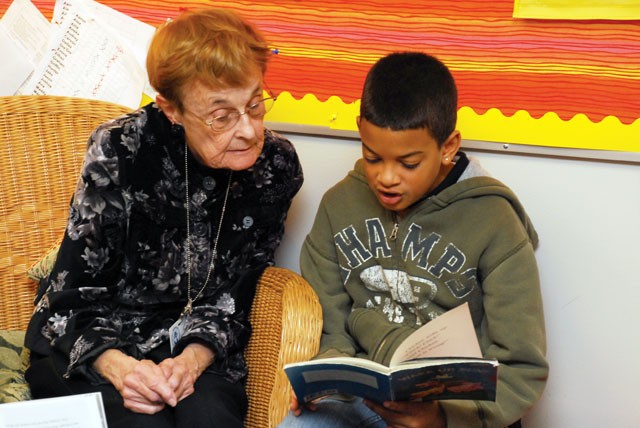 Esther Walter brings a lifetime of wisdom with her when she comes to help kids in Kathy DuCrest’s second-grade class at Hamblen Elementary practice their reading.

The kids gather around Esther, each one clutching books filled with large type and vibrant pictures — crackling yarns brimming with talking tank engines, hungry caterpillars and unfathomably awesome steam-shovels. One by one, they sit on a bench and proudly read for her. As the kids slowly sound out the trickier words, Esther waits patiently, smiles and dishes out tips and encouragement.

Robin Fiorillo, volunteer specialist for Spokane Schools, says the district has hundreds of volunteers, but the older volunteers like Esther are among the best.

Many of the senior citizens specifically ask to help with reading. Fiorillo speculates it’s because when the elderly were growing up, they didn’t have video games to entertain them. They had these things called “books.”

She loves senior volunteers for a two reasons. They’re reliable — they live by their schedules — and they have a great work ethic.

Esther even won an award from the West Valley School District for her volunteerism.

But it’s not the awards that inspire her. It’s the kids.

“Children give me a purpose,” Esther says. “When you get my age, you have to have a purpose.” The kids — their laughs, their smiles, their eagerness — make Esther feel young. “They’re full of life, they’re friendly, and they’re not mean-looking or sour.”

At 80 years old, Esther is vibrant and peppy. She credits her good health to her walking regimen (a 40-minute walk, five days a week) and her volunteer week. Too many seniors, she says, are stuck in the same loop of routine. She advocates a steady diet of mental activity, and she says seniors who can’t leave home could benefit from large-type books available at libraries and from watching educational programs on television. For Esther, an active mind is a healthy mind.

That’s one way seniors also benefit from helping out. “They tell me it makes them feel young. It gives them a reason to get up in the morning. It makes them feel appreciated and valued,” Fiorillo says.

Esther has been volunteering at elementary schools for 20 years. She credits an ad in The Inlander for her decision to volunteer at Sheridan Elementary. While volunteering at Pratt Elementary, Esther met DuCrest. After Pratt closed — victim to the district budget axe — Esther followed DuCrest to Hamblen.

In many cases, a relationship forms between the senior volunteer and the young students. “They end up being adopted little grandkids for them,” Fiorillo says.

Seniors who want to volunteer can apply at any school or find an application on volunteer opportunities page of the Spokane Schools Web site. Fiorillo says the district has literacy coaches to teach volunteers how to assist reading.

Esther is working on the art of helping kids read. She says the key lies in the sound of her voice. It has to be patient and compassionate, without a trace of criticism.

“I work on it, and I get better all the time,” Esther says.

She encourages students to take as much time on the word as they need, and try to sound it out. Esther tells them to look for familiar sound in the word, like an “ed” or “ing.”

The results are tangible.

“It’s improved the reading scores so much,” DuCrest says. “When someone comes out of their day and takes their time, it says, ‘Reading is important. And it’s so important that I’m coming to help you read.’ It’s a giant message to these young children.”

For volunteering opportunities, check with your local school district; for Spokane Public Schools, log on to www.spokanepublicschools.org/elementaryliteracy.