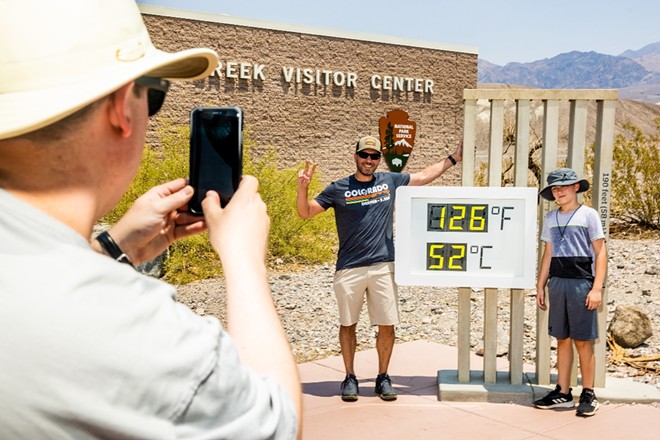 Roger Kisby/The New York Times
Visitors take photos in front of the thermometer at the visitors center in Furnace Creek at Death Valley National Park in Death Valley, Calif., on July 10, 20​21. Much of the West again faces record-breaking temperatures over the coming days, with over 31 million people in areas under either an excessive heat warning or a heat advisory. It is the third heat wave to sweep the region this summer.

As the West continues to bake under torrid temperatures, an out-of-control wildfire burned across southwest Oregon on Sunday, scorching more than 143,000 acres, threatening the power grid that connects Oregon and California and driving people from their homes.

The Bootleg fire continued to burn for its fifth day in a row on Sunday. The intense blaze escalated on Saturday afternoon, leading firefighters to leave the scene and retreat back to safety because of an “immediate, life-threatening risk,” according to one update from fire officials.

Charles Smith, a meteorologist with the National Weather Service in Medford, Oregon, said the fire was especially concerning because Oregon’s fire season had only just begun.

“There’s concern because of how early this is starting, and how far it has grown within a relatively short amount of time,” he said.

As the Bootleg fire continues to grow, it recently burned an additional 8 miles across a voltage power line corridor, threatening a major power grid, Path 66, that connects Oregon and California.

The presence of wildfires, including the Bootleg fire, has put pressure on California’s electrical system, leading to a Stage 2 power-grid emergency, which is just a step away from rolling blackouts.

Gov. Gavin Newson of California signed executive orders on Friday and Saturday allowing the use of backup generators and auxiliary ship engines for power to ease the state’s dependency on the electric grid.

The megafire in Oregon was just one hot zone across the western United States as a “dangerous heat wave” over the weekend was expected to continue into Tuesday, according to the National Weather Service. It is the third heat wave to hit the region so far this summer.

The scorching heat included a 130-degree reading in Death Valley in California on Friday, matching a similar recorded temperature in August 2020. The temperature in the area reached just over 120 degrees on Sunday.

Dangerously hot conditions, with temperatures ranging from 100 to 118 degrees, are expected in the western Mojave Desert and Owens Valley, in California, and throughout parts of western and south-central Nevada, including Las Vegas, in Clark County, until Tuesday.