Booze Brings Us Together

Waiting at Dry Fly on the eve of their first-ever bourbon release. 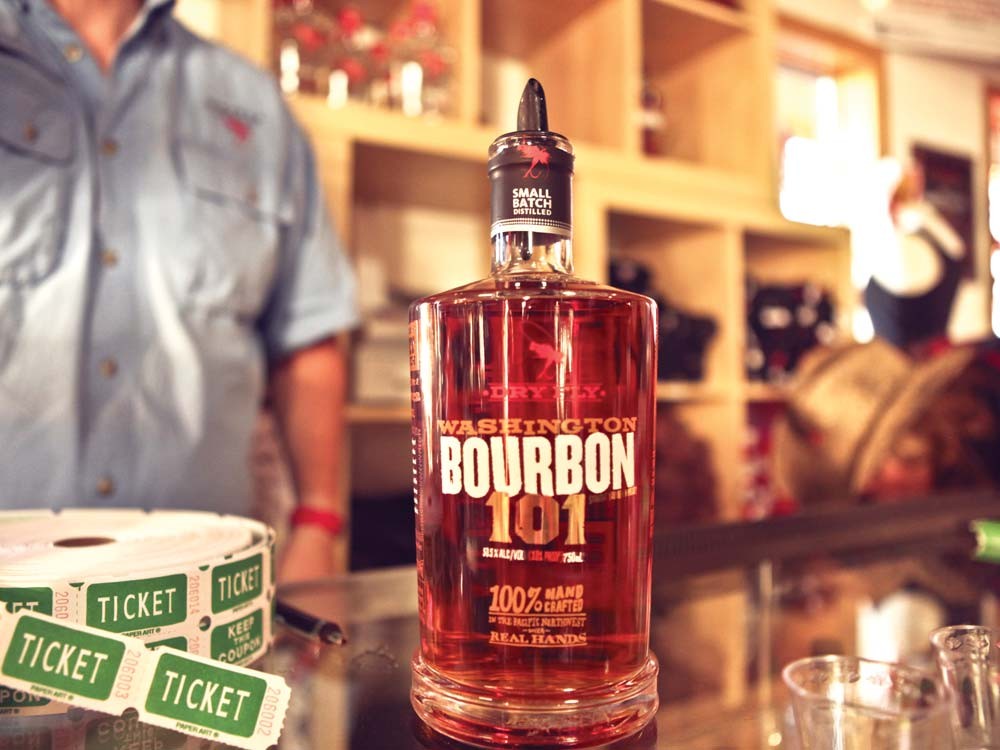 Jordan Beauchamp
Dry Fly’s new $65 bourbon, and the select few who got to taste it on Friday night.

Here's the recipe for the perfect storm: 20 percent wheat, 20 percent barley, 60 percent corn, sealed in Kentucky-made American oak barrels. Uncork three barrels of the 101-proof whiskey after three years of aging. Call it “Washington Bourbon 101,” bottle it into just over 500 cylindrical glass fifths, and then sell it for $64.95 a pop. Announce an early morning release date at your distillery, and watch the crowd amass days beforehand.

And so it is that at 8 pm, with 12 hours to go until the Saturday morning release of the beverage that would mark the state’s first entry into the bourbon market, the line at the front of Dry Fly Distilling is two days old, and the pair at the front are kind of drunk.

“We’ve been measuring time by watching the sun on the pavement,” says Daus Wellhausen, who is the first person in line, along with fellow plumber Brent Roberts. They have been waiting since Thursday at 7:30 am, subsisting on beer, vodka, barbecue, and a “crappy three hours of sleep.”

They are joined in line by iPad-wielding Tacoma residents, denim-clad Palouse farmers, barbecuing Spokane firefighters and a three-legged dog. All are doing the same thing on Friday night in the Trent Avenue strip-mall parking lot: waiting for bourbon.

The man in control of the bourbon is Don Poffenroth, co-owner of Dry Fly Distilling. Inside the distillery, Poffenroth stands behind the counter, selling T-shirts, shaking hands and generally holding court.

“It is the perfect storm,” Poffenroth says of the hullabaloo surrounding his latest release. “People are voracious about it.”

Third in line is Bill Robinson, a Colbert resident whose drawl gives him away as an Oklahoma native. A man who claims to always have some whiskey at arm’s length, Robinson says he is here to give a bottle of Dry Fly’s bourbon as a gift.

As is the case with many people in line, Robinson is a Dry Fly enthusiast.

“Their whiskey is outstanding,” he says. “I’ve waited for every line they’ve had.”

Dry Fly is so named because Poffenroth met his business partner, Kent Fleischmann, while fly fishing on Montana’s Gallatin River. Poffenroth says he is an “avid consumer who became a producer” and resigned his job as the marketing director for a large food company to devote himself full-time to distilling.

Since 2007, Dry Fly has been distilling vodka, whiskey and gin. The bourbon is one of the first liquors produced, but it had to be aged before it could be released. Unlike their whiskey, it’s made from at least 51 percent corn, in accordance with rules for the style.

They have 10 barrels of the bourbon left, according to Fleischmann, and they plan to wait a year before opening another batch.

The following morning begins with coffee, donuts from the distillery and bagpipes provided by the Spokane County Firefighters Pipes and Drums, who parked their RV overnight to serenade the crowd and maybe persuade Dry Fly to offer them a sponsorship.

Their pipes and drums wake up the 180 loyal connoisseurs, and at 8 am, they begin dutifully marching through the distillery doors, handing over their money, and leaving with their bottles. The bourbon is gone by 10 am.

When asked, the people in line differed as to how they prefer their bourbon. Many take it on the rocks, some drink it neat, others make concoctions like whiskey sours or old-fashioneds.

Kevan Kurdzos, who lives in Tacoma, had said that he was going to pour his Dry Fly bourbon over two ice cubes in an old-fashioned glass. Then, he said, he was going to go to the Seattle release party this week and get himself another bottle. n