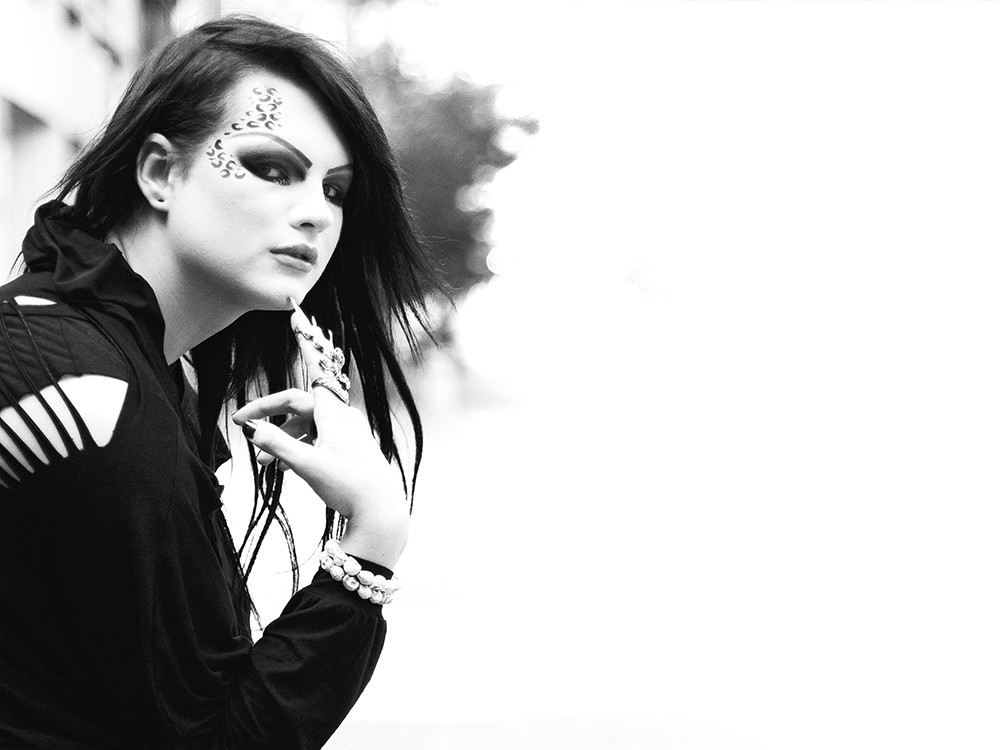 Young Kwak
Gage Lang began calling himself "Gage Glamorous" in high school and has gained a legion of loyal fans.

On a Monday morning in Spokane Valley, Gage Lang is dressed like it’s Friday night in Hollywood.

His skin is white satin — pale, high cheekbones dusted with rouge, his lips colored an angelic pink. A gash of black glitter lines his lower lids, and his eye shadow runs so high it collides with the smattering of leopard spots that descend from his temple to his forehead. His nails are painted black. He wears big rings and bracelets and a sparkling necklace that reads “LOVE.” And his long, lithe figure is squeezed into a flowing top of ripped black gauze and a pair of pants so tight they could make anyone stop and look.

It isn’t until he stands — in platforms he towers 6-foot-5 — that it’s clear that this is most definitely a boy. A boy who doesn’t mind being seen. A boy who, in fact, wants people to look at him.

“Peoples’ reaction are always funny,” he says. “They’ll be looking at me like, ‘What is that thing?’”

He still remembers the exact moment he showed the world who he was — a moment that usually would epitomize the worst possible place and time to be your true self. It was his freshman year of high school. And in massive shoes, full makeup, electric-blue contact lenses and a shock of neon-red hair, Lang walked into the crowd at a University High School football game and watched as what felt like every eye in the stadium turned to look straight at him.

“It was like you almost landed a UFO ship and came out with pink smoke and everybody’s just like…” Lang’s mouth drops wide open, “That’s exactly what it felt like.”

But all those eyes on him felt right. Felt good. And right then and there, he says he became the real him. Not the Gage Lang they’d all known at Chester Elementary or Horizon Middle School, but the version of himself he knew was inside all along: Gage Glamorous.

To crowds of online teenagers, fashion freaks and makeup fanatics, the 18-year-old University High graduate is an idol, a budding celebrity with admirers around the globe and more than 33,000 people watching his every move on Instagram (more than 40,000 across his dozens of social media platforms). He calls his fans “glampires” and ships tank tops worldwide that read “KEEP CALM I’M A GLAMPIRE BITCH.”

He says he’s a musician and is meant to be onstage fronting a rock band like his idols: Marilyn Manson, Lady Gaga, Jeffree Star. But as of today he’s never produced a song, sung in a band or stood on a stage.

No matter, he says. He might be approaching his career backward — fans first, talent later — but he has no doubt that one day everyone will know his name. Right now, he’s become famous for just being himself.

As a kid, he played with makeup and his mom’s clothes. And until high school, Lang says he was just like any other teenage boy: flannel shirts, Vans shoes, skinny jeans, messy hair. He started playing with eyeliner in middle school — dotting it around his eyes first, then posting videos of himself on YouTube giving makeup tutorials. He got his laptop taken away by his parents for that one.

But he’d found a world of androgynous people online, and soon considered his best friends to be the faces he’d talk to after school and at nights on Myspace.

“It always felt like, even if you were to go to school and have a bad day, you would go home and there’s Myspace with everybody that’s the same,” he says. “The Internet was definitely like a best friend for so long.

“Middle school was my hard time, because of other kids. But when I got into high school I was like, ‘OK, I’m running this shit. I’m not going to be the kid that gets picked on all the time,” Lang says.

He makes it clear that his image isn’t a sexual thing — in fact, he says his sexuality isn’t important. This is his way of showing his true identity. He likes to bend the confines of gender. And sometimes he’ll still throw on Vans and a flannel if he wants to keep a lower profile.

Despite the fact that he’s never made any music to get famous, it’s his attitude — to stand up and be who he is — that’s preemptively made Lang a star. In YouTube videos he phones fans he’s never met before, telling them that he loves them. He writes manifestoes on believing in yourself, ignoring the haters and being who you want to be. He’s become this sort of platform-shoe-wearing, selfie-posing, self-help guru for the adolescent set. And now he has the full support of his family. His dad, a graphic designer, built his website and designs his merchandise.

Last week, he shared with his fans a photo of himself at age 14 — chubby-cheeked and awkward — meeting Jeffree Star, an androgynous male pop star, for the first time. “It was such an embarrassing picture for me,” he says. “But I was like, ‘Listen. You guys can be whoever you want.’”

When he talks about the rest of his career — the part he hasn’t built yet — Lang’s confidence rises. He knows what his stage will look like one day. He knows that before concerts he’ll dress in disguise and appear in the audience to surprise his fans. He imagines his stage outfits and his name in glittering marquee lights.

For now, he spends his days folding T-shirts at Hot Topic and answering fan messages (on this particular Monday, he says he’s gotten 329 in the past 24 hours). He’ll start recruiting a band soon. Maybe move to California next year. He knows there’s a long road ahead for him to become a rock star, but says he couldn’t be surer that he’ll reach his goal.

“It’s hard to focus on anything else. In school my grades weren’t great because that was what was always on my mind. Always,” he says. “I know that if you work for something hard enough, it will happen. That’s just my mind-set. And there’s no Plan B.

“That’s all I have to keep telling myself. … I cannot accept anything other than what I want.”

But even if he doesn’t reach that dream one day, he’s already changed the lives of many of his fans. Shawnee Sample, a 14-year-old from San Bruno, Calif., says over email that Lang has helped her be the person she wants to be.

“He cares about every one of his fans and that means the world to me. He actually cares and he actually listens,” she writes. “With the times I’ve talked to Gage he has truly made my outlook on life more positive. I feel Gage inspired me to do my best, to not take crap from people, and just be myself.

“That’s all I ever need to be, Gage helped me realize that.”