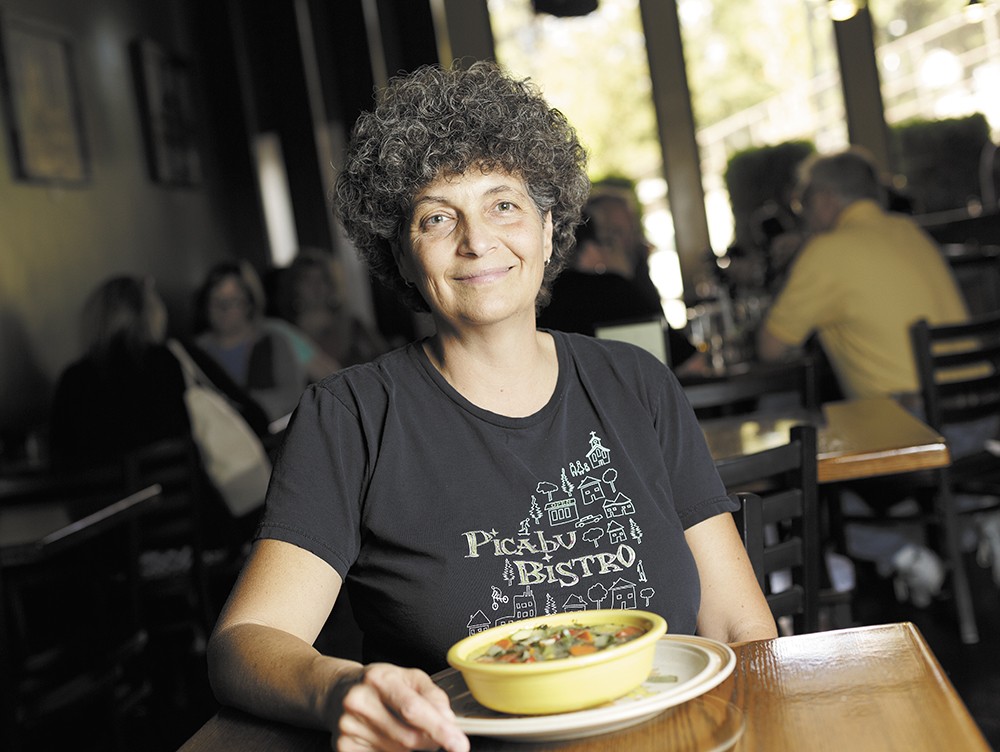 Young Kwak
Picabu Bistro owner Jane Edwards says homemade soup is "a good way to use up ingredients you don't have anything else to do with."

With the onset of cooler weather, our attention turns toward warm foods like stews and soups,

which provide more than just physical sustenance. They're economical, versatile, usually easy to prepare and serve, and can accommodate a range of dietary requirements, including gluten-free, vegan and those wanting to minimize their fat, salt or sugar intake without sacrificing flavor.

"Soups are also a good way to use up ingredients that you don't have anything else to do with," says Picabu Bistro's Jane Edwards.

Her Harvest Chicken Soup is a one-pot meal designed to deliver two different menu items. By cooking the chicken herself, Edwards not only gains a flavorful, nutritious broth for her soup, she can allocate the remainder of the meat to another entrée, such as Picabu's Garlic Chicken Melt.

Chicken soup — or some variation of it — is ubiquitous, almost worldwide. Switch the chicken broth with coconut milk and Thai spices for the beginnings of thom kha kai. The Greeks add lemon and eggs to create avgolemono, while Latin American and South American versions of sopa de pollo might include rice, tomatoes, corn and such spices as cumin and cilantro.

The history of soup is the history of cuisine and of culture: borscht (Russia), minestrone (Italy), ramen (Japan), bouillabaisse (France), pho (Vietnam). And soup need not be warm to be a soup; gazpacho (Spain) and khyar bi laban or cucumber yogurt soup (Lebanon) are both served cold.

At Picabu Bistro, soup is a year-round offering, says Edwards. In addition to black bean chili, Picabu makes a vegan soup — cream of broccoli with coconut milk, for example — and a soup du jour.

Their soups sell amazingly well in the summer, says Edwards, especially when paired with salad; perhaps people don't want to heat up their own kitchens with a pot on the stove for several hours.

"It is a comfort food," says Edwards, "sort of a luxury to have cooking all day."

In the colder months ahead, a large pot of soup might be just what the doctor ordered. Although medical studies have not yet revealed exactly why soup (chicken soup, in particular) seems to help combat cold and flu-like symptoms, there is some agreement on its health benefits. It's easy to digest, often contains an abundance of vegetables, and its warmth helps unblock stuffy noses and lungs.

Not all soups are created equally, says Edwards, who notes that some are probably healthier than others in terms of fat, for example. "But I do believe that when you make things from scratch, you can control what goes in it."

For Edwards, that means flavor from spices like basil, tarragon, thyme and curry, and using the freshest ingredients possible. "We cut every vegetable that goes in [our soup]," she says. "We boil our own chickens to make our own base."

Edwards, who started Picabu with brother John 10 years ago (she's run it herself for seven years), says that servers not only have access to recipes, they've been involved in meal prep. That enables them to quickly respond to customer concerns about such things as food allergies: "You know what you're going to get when you come here."♦ 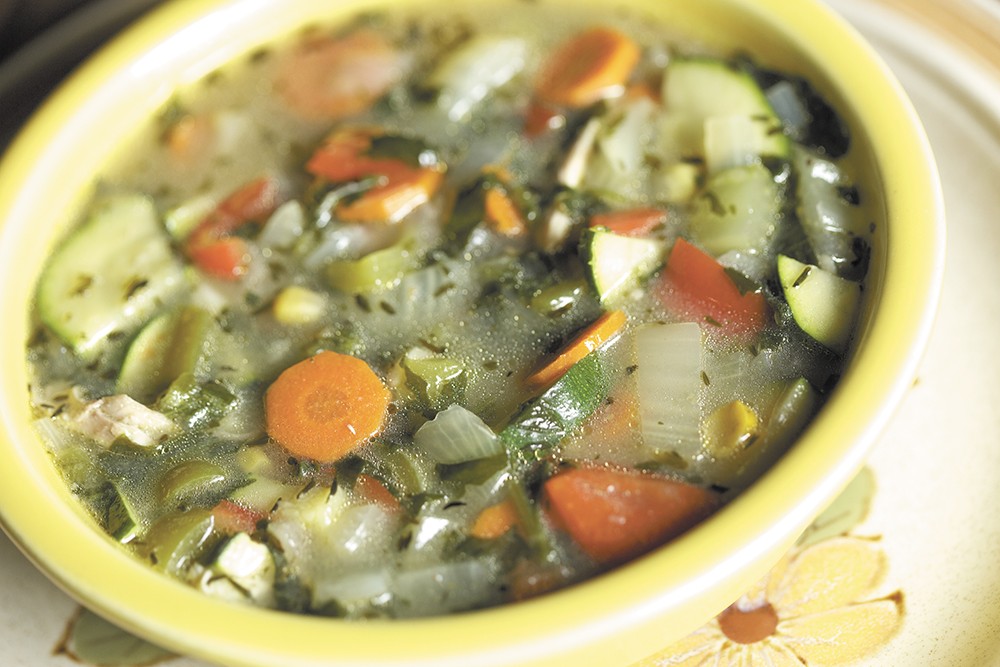 Rich in healthful ingredients and so simple to make, this chicken soup is also versatile, says Picabu Bistro's Jane Edwards. Add more chicken for a heartier meal, and feel free to substitute similar vegetables you have on hand, such as chard for spinach.

1 each, medium red and

salt and pepper to taste

To get the best flavor and nutrients, bake the chicken, let cool and remove largest portions of meat for use in another meal, such as chicken salad or chicken enchiladas. Boil bones in 4 quarts of water covered loosely for about an hour or two. While the chicken is boiling, prepare vegetables.

When the chicken is done, pour the bones and liquid through a strainer. Let the bones cool and pick off remaining meat to add to your soup, chopping into smaller pieces as needed. Set aside.

In the pot you boiled the chicken in, sauté onion and garlic in oil until the onion is translucent. Add all the vegetables except the zucchini and spinach. Season with thyme and add the chicken stock and chicken base. Stir and bring to a boil, then simmer on low for 30 to 45 minutes until the vegetables are tender. Finally, add zucchini, spinach, and chicken, season as needed and simmer another 5 to 10 minutes until fully warmed through.