Boys Will Be Dancers 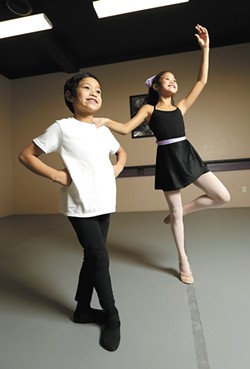 Young Kwak
Siblings Jude and Olivia Rodriguez are two of the 90 local children performing alongside professional dancers this weekend in The Nutcracker Ballet.

will perform for an audience of hundreds during each of The Nutcracker ballet's five shows this weekend the Fox in downtown Spokane.

The annual holiday season performance features 22 principal dancers from Santa Barbara's State Street Ballet dancing to Tchaikovsky's magical score as it's performed live by the Spokane Symphony Orchestra under the baton of Jorge Luis Uzcátegui. State Street's company of international dancers is joined on stage by 90 local boys and girls, including Jude and his older sister, 11-year-old Olivia Butterfly, cast in ensemble roles for various scenes throughout the fairy tale ballet.

Jude and Olivia's father Rodney Rodriguez says this is Jude's first year taking ballet classes, a decision made after spending lots of time hanging out while his sisters, including 9-year-old Evalynd, practice at Spokane Ballet Studio.

"We asked him this year, 'Do you want to try it?' and surprisingly he said yes, so he tried a couple of classes and then we went to try out for the Nutcracker," Rodriguez says.

Jude is one of five total boys, ranging from ages 7 to 12, who will be dancing alongside State Street's professionals in one of two scenes. Jude has been cast in the opening party scene as guests are arriving to story protagonist Clara Stahlbaum's home for a holiday celebration, while his counterparts were cast there and for a toy soldier scene, says Spokane Ballet Studio's Peggy Goodner Tan.

Tan says there aren't as many roles for young boys in the Nutcracker as there are for girls. Even so, finding boys to fill those roles can often be challenging because they're a significant minority in the art of ballet.

"Pretty much every boy who walks in the door gets a role," she jokes. "Part of it is that most of the parts are for girls, like angels in tutus and bon bons with polka-dot dresses, and there is nothing for older boy dancers in the show."

Of the total 90 local children cast in this year's Nutcracker production, 85 are girls from ages 7 to 18. Tan says to accommodate as many female dancers as possible, there are two groups of girls that alternate performing in each of the five shows.

Tucker Edwards, 17, has been practicing ballet in Spokane

since he was 6 ½ years old. While the homeschooled high school senior won't be slipping on his own dance shoes to perform in the Nutcracker this year (he's too tall for any of the male ensemble roles), he'll be busy backstage helping to coach the dozens of area children dancing in each performance.

Edwards dreams of pursuing a professional ballet career starting next year, and hopes to one day land the principal role, among others, of the ballet's titular Nutcracker Prince.

"I'd say that I knew from when I first started dancing that I really loved it, and the music," Edwards says. "I love the performing aspect of ballet... it's just a lot of fun to be on stage and showing the audience, whether the Nutcracker or something else, that it's a story."

Edwards has performed for the Nutcracker's annual staging in Spokane a total of six times (the last when he was 14) and in both scenes that feature young male dancers. He was asked a few years ago by Spokane Ballet Studio's Tan to help mentor other young dancers during local Nutcracker auditions, rehearsals and performances.

"It's really fun to help out and get to see the younger boys dancing and looking up to me," Edwards says. "It means a lot to me. I know when I was younger I always looked up to older male dancers, and I always wanted to dance like them."

Though both Edwards and young Jude Rodriguez are finding early success

in their ballet careers, professional aspirations in what's often outwardly seen (mainly in the U.S., as opposed to Europe) as a feminine art form is not without its struggles and stereotypes.

"I didn't let what other people said about me bother me, but there was always that stigma‚ and young men have to get by that," Gustafson says. "But when they get involved in Nutcracker and get around the company, it's not what they think. It's not the foregone conclusion of it being this feminine thing."

Being a male dancer also has its perks, Gustafson adds, not the least of which that talented boys and men in ballet are in higher demand because there's less competition for them.

Luckily for the two local dancers, both the artistic community and those close to them offer plenty of positive support.

Young Rodriguez's two big sisters both give him sincere encouragement, and even extra practice time at home.

"They are so positive," says their father. "Especially Olivia; she's in the scene with him, and the good thing about that, too, is that I was worried about him keeping up with the steps and memorizing, but since she's so experienced she's been helping him practice."

Edwards also has the steadfast support of his family as he continues pursuing his dance career, starting with auditions next month to land a year-round, in-residence training program at a professional ballet. Like Gustafson with State Street, though, Edwards also remembers being teased and criticized by his peers when he was younger.

"The older I got, the more confident I got that I'm a dancer, and it just helped make it easier [to deal with] if someone did that," he says. "All my friends know I'm a dancer and support me... Ballet is not just for women, it's for both men and women." ♦