celebrated anniversaries, or attended big shindigs like prom, yet many regional hotels have, of late, become more than special occasion destinations unto themselves.

It's about the food, of course, with many of the area's hotel kitchens working to stay on top or ahead of trends. It's also about the vibe, including décor and service. We took a look at the unique ways some of the region's lodging facilities are serving their guests, as well as an increasing segment of the community at-large in restaurant-rich Spokane and Coeur d'Alene.

Marcello attributes some of that increase to locals, which Hotel RL executives had in mind during the $2 million, year-long remodel completed in 2016.

"The space was redesigned as a communal live-work-explore space, a place where locals come to meet and socialize, as well as eat and drink," she notes.

The renovations included seating niches throughout the open-plan lobby and a bar that combines contemporary décor with rustic Northwest features. The lobby's visual centerpiece is a structure of metal beams, from which hang pod-like hammocks. Massive logs, living trees, beanbag seating and Western-style accents complete the illusion of outdoor camping.

"I'm very much the theme guy," says Webster, who describes how he highlights beef, trout, apples, and other local ingredients to create "craveable" food. Webster traded traditional cod for trout in his fish-and-chips dish, for example, and expanded the shareable menu with dishes like the roasted root hummus and deviled egg trio.

Webster's experiences combine the art and science of cooking, honed from dual interests in performing arts — he attended New York's American Musical and Dramatic Academy and has had some acting jobs — and baking, which he learned from his grandmother and mother, as well as on the job. Past gigs include an apprenticeship at Soutine, a former upscale French bakery in New York City, along with owning an artisan cookie business, competing on Food Network's Cupcake Wars, working for Ace of Cakes' Duff Goldman, and expanding from pastry to executive sous-chef at the Ace Hotel in Los Angeles.

Now, Webster is happy to call the Inland Northwest home. Although the downtown hotel has 402 rooms, presenting a challenge in sourcing year-round products in sufficient volume and consistently, notes the chef, he continues to develop relationships with regional providers.

"I relocated [to Washington from Northern California] for quality of life," Webster says, adding that he seeks to infuse the Hotel RL menu with a sense of the region's natural, fresh abundance.

is also the focus at one of the region's most historic hospitality brands, the Davenport Hotel Collection. It includes the flagship 103-year-old Historic Davenport, the contemporary Davenport Tower, the boutique-style Hotel Lusso, and the sleek new Davenport Grand. Dining varies from the Palm Court Grill to Table 13, the latter of which represents the first and last Davenport restaurant by acclaimed and recently departed chef Ian Wingate.

New executive chef Evan Tewel, who has been with the Davenport since 2011, recently took the helm at Table 13, and plans to uphold Wingate's legacy of innovation.

"I will be keeping current through focusing on the Davenport's Northwest roots; specifically through engaging the local farming community and making them a large part of what we provide," says Tewel.

Having connected with the local farming cooperative LINC Foods while still at the Historic Davenport, he's been able to maintain these local agricultural connections at Table 13.

In his capacity as executive chef, Tewel also tries to stay current on regional dining trends, which means dining around town as often as he can.

"In food, especially, imitation is a sincere sign of flattery, and chefs pick up flavors, concepts, and interesting tweaks everywhere we go," he says. "I also have an avid love for reading all things food, from high-end cookbooks to the late Lucky Peach [magazine], to various food blogs keeping me apprised of what's happening in food around the world."

When talking about hotels in Spokane,

the conversation should include a nod to Gerald "Jerry" Dicker, whose iconic projects include Spokane's Bing Crosby Theater and Hotel Ruby a block from the theater.

In 2013, Dicker purchased the Montvale Hotel, which houses the high-end Scratch restaurant and its companion bar, Rain Lounge, on the first floor. Dicker recently worked with Brooklyn Deli & Lounge, relocating it into the Montvale's street-corner lobby space. He also connected with award-winning local chef Adam Hegsted, who was keen to custom-fit a restaurant into the historic building's cozy basement, resulting in the Gilded Unicorn, which opened in late 2015. All three restaurants fulfill Montvale guests' room service requests, while the nearby Hotel Ruby serves continental breakfast.

Recently, Dicker and Hegsted paired up on a similar project in North Idaho for Hotel Ruby Ponderay, which is served by Hegsted's new Farmhouse Kitchen & Silo Bar. The restaurant partnership reflects Dicker's interest in creating win-win business arrangements: Diners get a range of options, while the restaurants benefit from a supportive model that still allows them autonomy.

"All of our projects, we like to integrate the different concepts with independent people," says Dicker.♦ 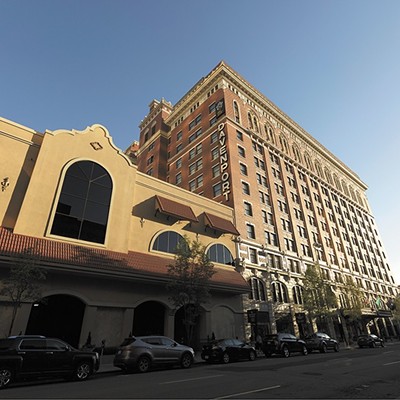