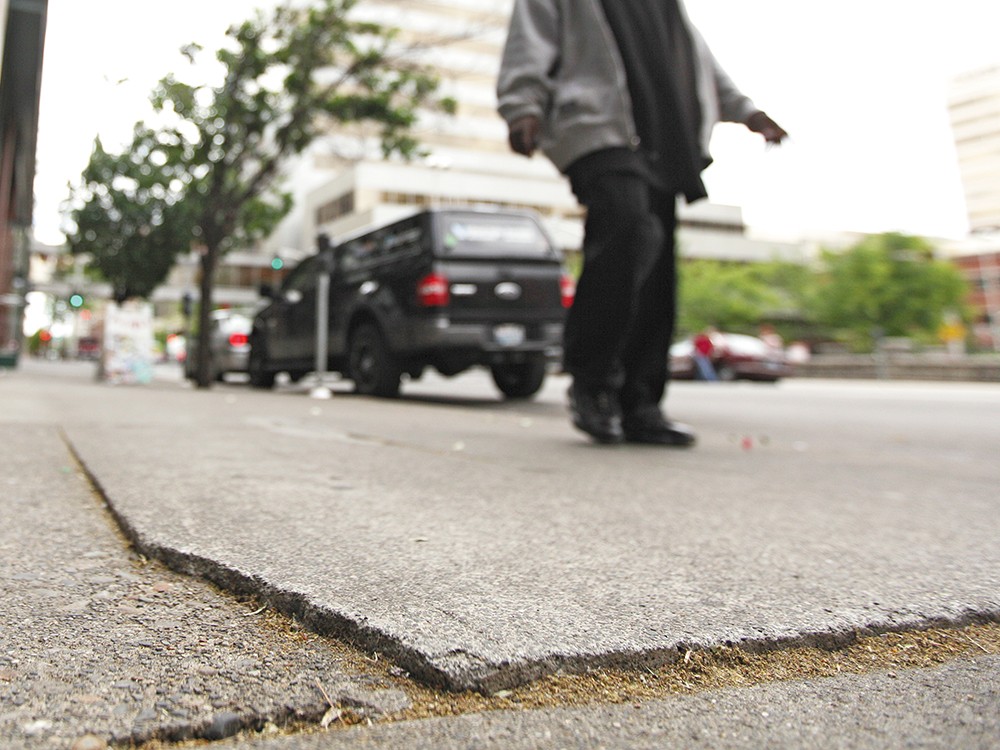 Young Kwak
So far this year, the Spokane City Council has approved nearly $200,000 in settlements for sidewalk injuries.

In what seems a basic lesson of economics, the city of Spokane is learning that everything costs money, including the city’s disintegrating downtown sidewalks.

“Every time we approve [a sidewalk-related claim],” the council takes an increased interest in damaged sidewalks, says Councilman Steve Salvatori. “Maybe next time we approve one — maybe that one will be the catalyst.”

“I do see value in being proactive and spending on sidewalks as opposed to being reactive,” says Tim Dunivant, the city’s director of management and budget, who also oversees risk management. “Our whole goal is not to have people get hurt, and the byproduct [is] if I can keep people safe, I can save money in the long run.”

Haller’s payment stemmed from a cracked, uneven sidewalk in front of River Park Square in 2005, and Ciccarello twisted her ankle in a “pothole in the sidewalk” in front of Jimmy’z on Sprague in 2008. (Both cases also named the businesses involved.) Since the beginning of 2012, another five claims have been filed regarding sidewalk injuries, though none have resulted in settlements yet.

Sidewalk upkeep is only part of the city’s responsibilities. Most business owners are responsible for the sidewalks in front of their businesses (the same way they’re required to shovel them during the winter). But people who are injured often also name the city in their lawsuits, so Salvatori says he’d like to see the city offer some sort of matching funds to business owners who want to improve sidewalks, in order to help prevent suits against the city. That money could come from parking tickets and meter revenue, he says, funds that were recently consolidated to be spent on downtown improvements and are expected to increase this year with new meters that accept credit and debit cards.

“Always in executive session we’re going, ‘What the heck? We’ve got to fix these sidewalks,’” Salvatori says. “It would take a long time to get every sidewalk up to speed, but until you start, you don’t make any progress.”

The city has applied for a $1.1 million grant from the Spokane Regional Transportation Council’s Transportation Alternative Program, which focuses on alternatives to driving, for sidewalk repairs. The city would match the grant with about $173,000 and the Downtown Spokane Partnership would chip in about $50,000, according to the grant application. The application cites expensive claims as a reason the “condition of sidewalks in the downtown has also been brought to the forefront.”

Brandon Blankenagel, a senior engineer with the city who submitted the grant application, says sidewalk maintenance has been a low priority because funding for repair hasn’t been widely available. The city has “infill” programs to add sidewalks where there currently aren’t any and has funding exclusively for making curbs compliant with the Americans with Disabilities Act, but no program explicitly for repairing broken or dangerous sidewalks. Many of downtown’s sidewalks are “vaulted” above the basements of old buildings, making them more expensive to fix and more likely to stay broken for longer. Primarily, the city repairs sidewalks when it’s doing some other kind of street work, he says. The city spends about $1.4 million a year on sidewalks, but only about $500,000 is dedicated to sidewalk repairs, Blankenagel says.

When paying settlements — for sidewalk injuries or anything else — the council approves claims for more than $50,000. The rest is handled directly by the city’s risk management department. Dunivant says his office doesn’t track claims paid by the type of claim, like sidewalk injuries, but the city has spent $11 million over the past five years and $1.8 million through May 31 of this year on claims brought by citizens, ranging from city garbage trucks running over people’s sprinkler heads to the $1.67 million settlement the city paid Otto Zehm’s family last year. Zehm died after a violent confrontation with police in 2006.

Spending on claims is routine — the city budgets for these things — but as the dollars add up they can draw attention to needs like sidewalks.

Claims can also result in more spending on the city’s insurance policy, Dunivant says. The city has what is essentially a $1 million deductible, meaning once it pays that much per claim, its insurance company picks up the rest. Last year, as the insurer saw Spokane face big cases like Zehm’s, the city’s rate spiked by about $200,000, Dunivant says. And as the city prepares to renew its policy later this summer, he expects more increases.

“If you start having multiple [expensive claims], they start to wonder, ‘Is there a higher risk there? Do we need to raise the rates to recoup our costs?’”