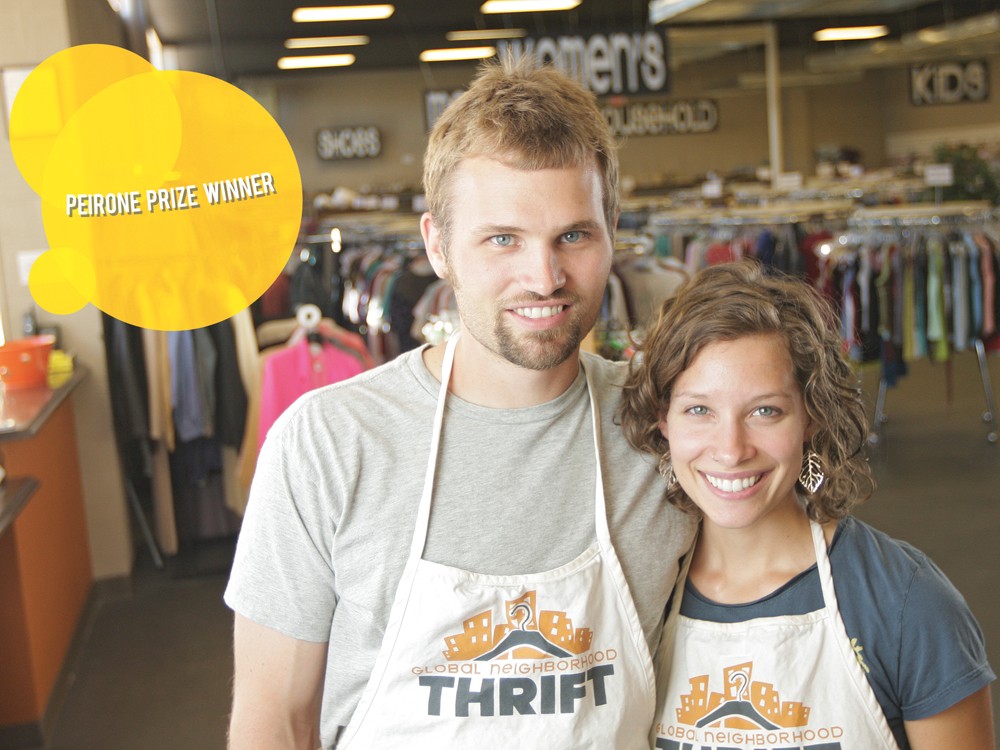 Brent and Amy Hendricks have been in business as long as they’ve been married. For three years, they’ve run the nonprofit Global Neighborhood, an organization devoted to aiding refugees. Today, they sit in their downtown headquarters, an office that — like everything else in their company — was donated.

Behind them is a crib, and they laugh when asked if they have a baby.

Brent and Amy decided early on in their relationship that they would devote their lives to others.

Brent was offered a good job after graduating from Whitworth, and while any other recently engaged graduate would have leapt at the opportunity, “I knew we wouldn’t be happy with ourselves,” he says, “if we saw this need and went the other direction because of a desire for stability.”

Instead, they formed Global Neighborhood together in an effort to befriend refugees who needed support and a helping hand as they started new lives in a new culture. Amy comments that their mission statement began “in the living room of a Sudanese family’s home. We were sipping tea and talking with them when we asked the very American question, ‘What do you need right now?’

“They said, ‘Well, we need a vacuum cleaner and our couch is moldy, but we can figure that out on our own. The real problem is we’ve been here a year and you guys are the only Americans we know.’”

Right then, their priority became about building relationships instead of offering material goods.

“If they want to learn English,” Brent says, “we get people to help them with English. But maybe it’s learning the culture, or helping their kids get through school, or finding a job, or getting a driver’s license. We don’t have specific plans for refugees, because the program needs to be organic.”

In July, to accommodate these different needs, the couple opened Global Neighborhood Thrift, a store run largely by refugees.

“We had a storage unit packed with donations,” Brent says, “and felt that opening a store would be a good way to employ some people.” But the store also doubles as a method for teaching customer service and managerial skills to refugees, while still being flexible around their school schedules.

People ask the couple if its hard to work with their spouse, or if it’s hard to hear the horror stories that so many of their clients have encountered.

But Amy, who also went to Whitworth, says that it’s in sharing an occupation that the couple protects their marriage.

“We’re human. We have limitations. We get depressed,” she says. “But we both hear these awful stories, so when you come home upset, you don’t have to explain yourself to the other.”

Brent and Amy accept that in no way does a refugee’s sorrow stop when they arrive here. Emad Salih, one of their employees at the thrift store, has aspirations of becoming a counselor — but he seems to get thwarted at every turn. He has recently divorced, he’s endured a custody battle over his son, and he has been wrongfully arrested several times. But the Hendricks’ support never wavers.

Still, they refuse praise. To them, Global Neighborhood couldn’t exist without the donors and volunteers who share similar goals. Today, their organization is assisting 275 refugees, a feat only accomplished through a network of well-intentioned individuals. “We can’t do this alone,” Brent says. “It’s a community effort.”

But it’s the Hendricks who are at the center of it all.

Salih says from behind the thrift store’s cash register, “When I first come here, [Brent and I] would get coffee a lot, and he’d help with my English. He’d play pool with me. Now I work here at store, and he is my boss, so I see him everyday. He is my boss, and he is my friend, now at the same time.”

To volunteer with Global Neighborhood or make a donation, visit global-neighborhood.org or call 703-7524.

For the second year, we here at The Inlander are honoring three local winners (make that four, as one winner is a husband-and-wife team) of the Peirone Prize. They’ll each take home the love and admiration of the community for all they do — and a $1,000 honorarium to spend however they’d like.

The award is in memory of two of my grandparents, Joe and Alice Peirone (pronounced “Purr-ohn”). Their lessons of hard work and generosity made it possible for Jer and I, along with our mom, Jeanne, to start The Inlander back in 1993. Part of our mission all these years has been to promote the good things that happen here, and to identify the great people who make this a special place. The Give Guide, now in its 10th year, is a prime example of that.

Thanks to Joe and Alice’s two kids, my mom Jeanne and my uncle Jim Peirone, they continue to be generous with today’s devoted young people. Joe, who founded Peirone Produce, which still brings fresh fruit and veggies to the region, passed away nearly 20 years ago. But Alice is 92 today, and she wishes the winners of her prize well.

Our criteria for the Peirone Prize is that you be making a difference here at a relatively young age (40-ish and younger). There are lots of deserving people of all ages, but with this award, we wanted to particularly encourage young people who are choosing a life of service, as we all know that can require personal financial sacrifices.

We accepted nominations from local leaders in the nonprofit world and came up with 25 great candidates. Give Guide Editor Leah Sottile, Managing Editor Jacob Fries and I narrowed the batch to eight. Last year’s winners — Emily Paulson, Ben Stuckart and Taylor Weech — were asked for their input, and we finally settled on our three winners, who you will meet here.

As you read through the winners’ stories, you’re bound to be inspired to do your part, too. Lucky for you, the following pages (starting on page 44) are filled with local nonprofits deserving of your support. We’ve even provided you with three easy ways to give — by phone, via the web or by mail.

As little as $20 can make a big difference — it buys 11 meals at the Union Gospel Mission, for example. So even if you can only give a little, it all adds up. And if you are blessed to be able to give a lot, well … we need you, so pick out some worthy charities and make a difference.

Send your Peirone Prize 2012 nominees or thoughts on this Give Guide section to giveguide@inlander.com.