There's no excuse not to drink local beer 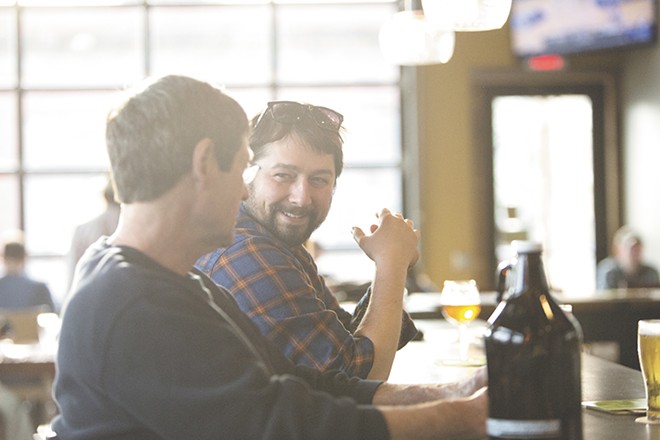 12 String Brewing Company You'll notice the guitar theme of this Spokane Valley brewery not long after gazing upon its beer selection, with names like Arpeggio Pale Ale and Electric Slide IPA. Owner and brewer Terry Hackler, who keeps a contingent of regular beers on tap, doesn't shy away from experimental brews, some of which you can try on Thursday nights when 12 String serves up cask-conditioned creations. On Mondays, they have free pizza. 11616 E. Montgomery Dr., Spokane Valley • 241-3697 • 12stringbrewingco.com

238 Brewing Named after the telephone prefix for the Green Bluff agricultural oasis north of Spokane, 238 Brewing came onto the scene in 2015 with a tasting room on Legacy Farm. Currently only open Fridays through Sundays, 238 makes beers — like a peach hefeweizen — that will remind you of the farmlands surrounding you as you imbibe. 10321 E. Day Mt. Spokane Rd., Mead, Wash. • 238-2739 • 238brewing.com

Bennidito's Brewpub In the summer of 2015, Chris Bennett, the longtime owner of Bennidito's Pizza on the South Hill, finally realized his dream when he opened this east-of-downtown Spokane brewpub with his ex-wife and business partner Sigrid Bennett. Brewer Zach Shaw, a veteran of the early days of the Northern California craft beer boom, hopes to bring some of that spirit to the creations made at Bennidito's Brewpub. 1909 E. Sprague Ave. • 290-5018 • facebook.com/BenniditosBrewpub1909

Big Barn Brewing Co. The setting at Green Bluff-based Big Barn Brewing Co. is reason enough to venture off the beaten path to try these farm-to-pint-glass beers. Some of the hops used to brew the beers are actually grown on-site, as are berries that are known to make it into seasonal creations. The brewery has expanded as of late, and you can find their beers in Spokane-area establishments from time to time. 16004 North Applewood Ln., Mead, Wash. • 710-2961 • bigbarnbrewing.com

Black Label Brewing Co. Steve Wells and Dan Dvorak opened Black Label in 2015, bringing their homebrewed creations to the masses. The pocket-sized brewery is located in the gorgeous Saranac Commons, home to several other restaurants, meaning you can grab their delectable red ale or honey blonde and eat food from one of several outlets. 19 W. Main Ave. (inside Saranac Commons) • 822-7436 • blacklabelbrewing.com

Budge Brothers The strip-mall-like location off Sprague is sparse, but inside, a friendly barkeep is happy to pour you a flight ranging from the light Orangutan Pale to the dark, caramelly Extra Stout. Their Hop Train IPA has a dense, floral nose, due partly to the 19 pounds of hops added after fermentation. Check out their website for $5 growler fill specials on Wednesdays • 2018 E. Riverside Ave., Suite 1 • 426-3340 • budgebrothers.com

English Setter Brewing Company English Setter Brewing began with Jeff Bendio brewing out of his garage for special events. In the past year, he got a facility for his upland-bird-hunting-dog-themed brewery in Spokane Valley and opened up a taproom. You can try the On-Point Pale, Fetching Blonde, Wiggly Butt IPA and several others, along with a lunch and dinner menu and live music. 15310 E. Marietta Ave., Suite 4, Spokane Valley • 413-3663 • englishsetterbrewing.com

Hopped Up Brewing Company This brewery, owned by husband and wife Steve and Sue Ewan, serves its creations in the tasting room, formerly an International House of Pancakes. Steve says Hopped Up has been a long time in the making; he bought the brewing equipment more than 10 years ago. It sat in storage until Steve, a longtime homebrewer, decided to jump into the burgeoning Inland Northwest brewing boom. 10421 E. Sprague Ave. • 413-2488 • hoppedupbrew.com

Iron Goat Brewing Co. In the past year, Iron Goat Brewing has attracted a much larger following thanks to the successful sales of their new 22-ounce bottles, which popped up on beer shelves in early 2015. The makers of the beloved Headbutt IPA and Trashy Blonde have some other changes in the works as well. By the end of 2015, they should be operating out of a new space in downtown Spokane and plan to sell their current (and hard-to-find) taproom in east Spokane. 2204 E. Mallon Ave., Suite B • 474-0722 • New location, opening late 2015: 1302 W. Second Ave. • irongoatbrewing.com

Laughing Dog Brewing Located just a mile north of Sandpoint in Ponderay, Laughing Dog's new taproom is home to the brewery's bevy of creative brews, which have become popular far beyond North Idaho. Found in cans throughout the region, their IPA is excellent, as is their Two-One Niner pilsner, named after the beloved dive bar in downtown Sandpoint. 1109 Fontaine Dr., Ponderay, Idaho • 208-263-9222 • laughingdogbrewing.com

Mad Bomber Brewing In 2013, three former Army bomb squad soldiers (hence the operation's name) with an interest in homebrewing decided to make their hobby a career and founded Mad Bomber. As a super-small-batch brewery, they can switch out their beers on a frequent basis, meaning you'll often see something new on the tap list. 9265 N. Government Way, Hayden, Idaho • 208-762-7343 • madbomberbrewing.com

Moscow Brewing Co. Moscow Brewing looks to keep things simple. Their beers are named simply by their style — like the Cedar-Smoked IPA and the Oatmeal Stout — and brewer Lucas Rate says they're keeping their dreams local. The brewery has a tap room (open Wednesday through Saturday), but mostly you can find their brews at restaurants and bars in Moscow and Pullman. 630 N. Almon St., Moscow, Idaho • 208-874-7340 • moscowbrewing.com

No-Li Brewhouse The originators of "Spokane Style" beers, this surging brewery has made inroads throughout the nation with its locally sourced beer that's bottled in gorgeously designed glass. While you can find it just about anywhere, the brewhouse near Gonzaga is a must-go for any beer fan, as they'll find specialty beers, a slickly designed space and, at least during the warm months, a grassy courtyard with a view of the Spokane river. 1003 E. Trent Ave. • 242-2739 • nolibrewhouse.com

New Boundary Brewing It was about time Cheney got a brewery, and New Boundary Brewing was happy to become the first beer maker the college town has seen in more than 100 years. Brewer and owner Shane Noblin sold his printing shop in Alaska in order to relocate to the Inland Northwest and begin the small-batch brewery, which he promises will produce adventurous and unique brews. 505 First St., Cheney, Wash. • facebook.com/newboundarybrew

Orlison Brewing Co. Orlison has focused on brewing lagers since the days when it was known as Golden Hills. With a production facility in Airway Heights, Orlison is able to produce canned beer that makes its way throughout the West Coast. Soon, Orlison plans to open a tasting room in downtown Spokane, making it a little more accessible to beer tourists. 12921 W. 17th Ave., Airway Heights, Wash. • 244-2536 • New tap room, opening soon: 1017 W. First Ave. • orlisonbrewing.com

Paradise Creek Brewery This brewery has churned out a diverse roster of tasty beer in an old Pullman post office since 2010. They feature eight year-round beers, but take a stab at one of their many seasonal offerings, including the summer-friendly Oh Beehave! (honey-accented wheat beer) or the Pumpkin Porter. 245 SE Paradise St., Pullman, Wash. • 338-9463 • paradisecreekbrewery.com

Perry Street Brewing In short time, Perry Street Brewing has become a popular institution on its namesake stretch of hipness on Spokane's lower South Hill. Owner and industry-trained brewmaster Ben Lukes keeps a stable of reliably tasty beers on tap, but also experiments with different yeasts, hops and other ingredients. The brewpub offers only a limited menu, but fear not — typically, there are food trucks tend to hang around outside, or you can order food from a nearby restaurant. 1025 S. Perry St. • 279-2820 • perrystreetbrewing.com

River City Brewing This downtown Spokane brewery made a name for itself with its flagship red ale, but has since gone on to make a bevy of other creative and tasty brews, among them the Afternoon IPA, a low-alcohol but hoppy beer. Their taproom is home to welcoming service and a local-music-only policy that will get you acquainted with the music scene. 121 S. Cedar St. • 413-2388 • rivercityred.blogspot.com

Selkirk Abbey Fans of Belgian-style beers who can't readily take off to Europe can find the next best thing at Selkirk Abbey in Post Falls. The brewery makes everything from a Saison to a Belgian-style IPA appropriately called Infidel. Selkirk Abbey has a wide distribution reach for their 22-ounce bottles, so you can easily snag their goodies from most grocery stores. 6180 E. Seltice Way, Suite 102, Post Falls, Idaho • 208-292-4901 • selkirkabbey.com

Slate Creek Brewing Co. In the Inland Northwest, beer and nature appreciation go hand in hand, so why not bring it all under one roof? Brothers Ryan and Jason Wing did just this when they opened Slate Creek Brewery. It has a rustic, industrial theme and plenty of earthy colors. The beers fit the theme, with names like Mountain Hop IPA, Backcountry Brown and Norse Nectar. 1710 N. Fourth St., Suite 115, Coeur d'Alene • 208-664-7727 • slatecreekbrewing.com

Trickster's Brewing Company Trickster's owner Matt Morrow may have cut his teeth in the Colorado brewing scene, but his Coeur d'Alene brewery is distinctively Northwest-influenced. You'll find tasty IPAs, but also beer on the maltier side, as well as more adventurous creations like a huckleberry blonde or ginger and blood orange-infused ale. Another standby is their Bear Trap Brown. 3850 N. Schreiber Way, Coeur d'Alene • 208-966-4232 • trickstersbrewing.com

Steam Plant Brewing Co. Another downtown beer gem is Steam Plant, which operates a 10-barrel system nestled in the back of the restaurant and dishes out a number of a solid brews, including the Highland Scottish Ale, Jalapeño Ale and the popular Double Stack Stout. Many of the hops and grains used to make the beers are sourced locally and regionally. 159 S. Lincoln St. • 777-3900 • steamplantspokane.com

Waddell's Brewpub and Grille The next logical step for Waddell's ultra-popular beer hub on the South Hill was to begin making beer of their own, which is what owner Michael Noble did in 2013 when he opened the north Spokane brewpub and restaurant. Many of the beers reflect the story of turn-of-the-century ballplayer Rube Waddell, like the South Paw Pale Ale, Fireman's Amber Ale and Alligator Stout. The beer is made up north, but it's served at both locations. 6501 N. Cedar Rd. • 321-7818 • waddellsbrewery.com

Wallace Brewing Co. Wallace Brewing Company brews beer in the spirit of their town's notorious past. Their beer names are mining- and bordello-inspired, like the RedLight Irish Red Ale and JackLeg Stout. The place is equipped with a tasting room that includes darts and a pool table. 610 Bank St., Wallace, Idaho • 208-660-3430 • wallacebrewing.com