Whether you're looking for that perfect red blend or seeking a lively evening out, a visit to Bridge Press Cellars is probably a good option. The small, downtown winery focuses on Bordeaux-style wines — fine reds like cabernet sauvignon, merlot and cabernet franc, as well as some white wines, including sauvignon blanc and rosé.

But Bridge Press Cellars has evolved to include much more than wine.

Owners Brian and Melody Padrta didn't set out to get into the wine business when they settled in Spokane in 1995, where Brian is an orthopedic surgeon. Still, "My husband has always liked wine," says Melody. "One of our friends was the owner of Grande Ronde Cellars. He decided he wanted to downsize so he asked Brian if he'd like to try making wine."

So Padrta started making wine in 2005, beginning with 50 cases of cabernet. Nearly 15 years later, the winery produces about 10,000 cases a year. In 2012, Bridge Press opened a tasting and dining room plus production space at their current location, a two-story, 25,000-square-foot building that was constructed in 1907 by the Foresters of America. A portion of the building was first renovated in 2012, but the southern half of its main floor, and the second floor ballroom were both vacant until last year. 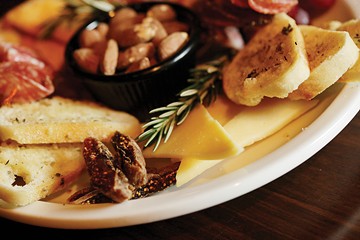 Young Kwak photo
Stop in to grab a bottle to take home, or stay and enjoy an artisan cheese plate.

"At the start, we shared this space with Emvy Cellars, which was owned by family friends, Mark and Valerie Wilkerson," says Andrew Padrta, the Padrta's son and co-owner of the winery. "When they retired two years ago, we took over the entire space."

The second floor ballroom was updated into a stylish event space that officially opened last May, while the vacant half of the building's main floor now includes both a live music area and the Forbidden Bar, which opened in November. "With the new bar, we're the first winery in the state to have a full liquor license," Andrew says. "Being able to offer spirits was something we'd wanted to do for a while."

The lively venue now hosts comedians, live music and dancing, and there's an outdoor concert series on the back patio, which was also recently updated.

Food is also part of the mix.

"Our bistro uses local food products, and we plan to add more full meal options to our menu this year," Andrew says. "In the spring we'll release a higher end blend for wine club members, as well as our first port."

When it comes to the operation of the business, Andrew says he and his parents each have their own roles. "My dad and I are the winemakers, and I'm also in charge of booking music or events, as well as marketing," he says. "Mom handles the finances, pretty much all of the wine side's outside sales and contact with distributors."

Melody says updating the building and creating a new venue with entertainment options (particularly for the middle-aged crowd) downtown has been a gift that keeps on giving.

"We always wanted to be able to bring more people into downtown," she says. "Hearing people's amazing stories about the dinners or experiences they've had here while drinking our wines inspires us to keep going."

While Bridge Press is probably best known for its red blend, “Evil Queen,” which can be found in local grocery stores and restau- rants, Melody Padrta says their signature wine is the cabernet sauvignon.

“It’s the first wine we made, the one that started our journey,” she says. “In cre- ating our wines we remain most focused on quality, using 100 percent French oak bar- rels, trying to get the best blend possible, that’s going to cellar for at least 10 years.” As for pairings, “Our Evil Queen can go with pretty much anything, but is great with Italian food and pork chops,” says Andrew Padrta. “Both our merlot and our sauvignon blanc are also really nice everyday wines to kick back with after a long day.”