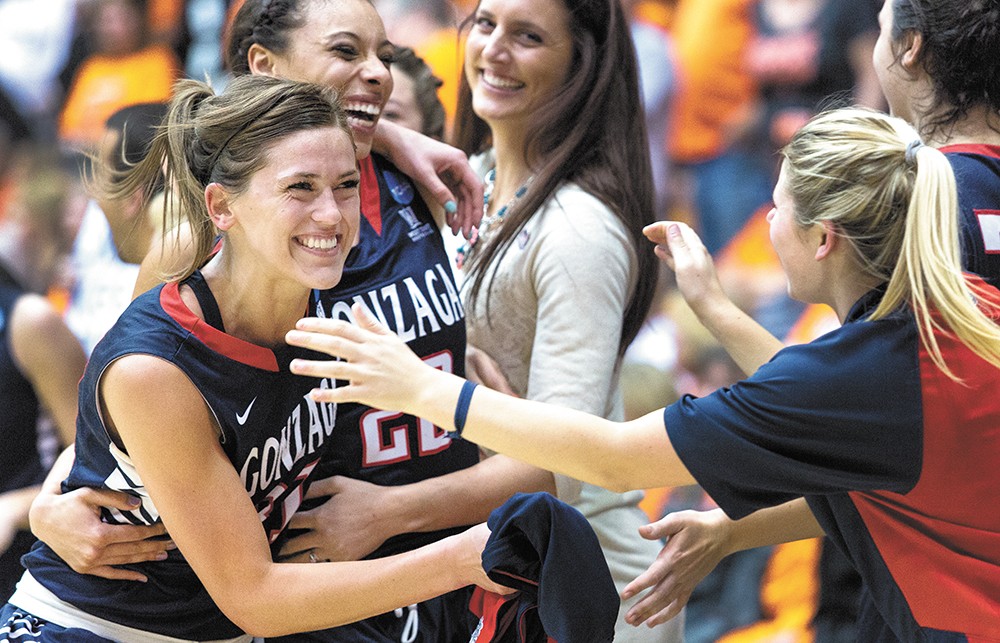 They had no business

The No. 11 seed Gonzaga women's basketball team was battling third-seeded Oregon State on the Beavers' home floor. A defensive juggernaut, OSU won the Pac-12 regular season championship, had the home court advantage to the tune of roughly 5,000 rowdy fans and starts the Pac-12 Player of the Year, 6-foot-6 Ruth Hamblin, who's known as the "Canadian Hammer" for her propensity for blocking shots into oblivion.

And yet there they were. With just over three and a half minutes left, the Zags were up by three points, 64-61. The crazy thing? They'd been up by as much as 12. But now it seemed like the game was slipping away. OSU star Jamie Weisner (who finished with a game-high 24 points) missed a three-pointer, but the Beavers' Marie Gülich snatched the offensive board and passed back to Weisner. The crowd roared as Weisner nailed the three. Tie game.

Gonzaga didn't miss a beat. Sunny Greinacher (12 points, five rebounds) screened Keani Albanez, who drove left toward the block, then kicked it out to Greinacher, who had rolled open just above the free-throw line and proceeded to nail a jumper. That shot was a gut punch to the rallying Beavers, as Gonzaga went on a 12-0 run, winning the game 76-64 and earning an unforeseen trip back to Spokane for the Sweet 16, joined by a trio of historically powerful women's programs.

The Zags shot 50 percent from the field and held the Beavers to 41 percent shooting. Redshirt freshman Emma Wolfram (17 points, four rebounds) set the tone from the opening tip. She went head-to-head with Hamblin, scoring three times over the taller post. Hamblin was held to nine points, four rebounds and three blocks.

"Sunny and I worked together to get Ruth away from the hoop and have the other one of us attack their smaller big," Wolfram says. "I think it really worked today."

The game was truly put away by an Albanez layup and steady foul shooting from various players in the closing minutes. Particularly impressive was junior Elle Tinkle's well-rounded game. She scored 14 points, grabbed seven rebounds and dished out three assists in a team-high 33 minutes. In the closing minute, she snagged two key rebounds and knocked down five of seven free throws.

"We didn't come out and wilt. We fought," says head coach Lisa Fortier. "Elle picked up the play on the glass. She got some huge offensive rebounds and huge defensive rebounds."

As time expired, the bench exploded. Players hugged and shouted in excitement. A jubilant pocket of Gonzaga fans punctuated the relative quiet of the arena. The celebration highlighted the victory's improbability.

Consider this: the Zags slumped late in the regular season, dropping back-to-back conference games, then lost in the WCC semifinals to BYU — nearly missing the tournament altogether. They opened NCAA tournament play against No. 6 seed George Washington, a team that had lost three games all season. The Zags won that game, 82-69. They limited George Washington to 29.3 percent from the field and forced 19 turnovers.

This is Fortier's first year as head coach and the Zags' fourth trip to the Sweet 16. On Saturday they'll meet No. 2 seed Tennessee at the Spokane Arena. This time they'll have the home court advantage. That's a dangerous combination, says OSU head coach Scott Rueck.

"That team is better than an 11 seed," Rueck says. "Nobody wants to see that team, especially going home. They are good." ♦