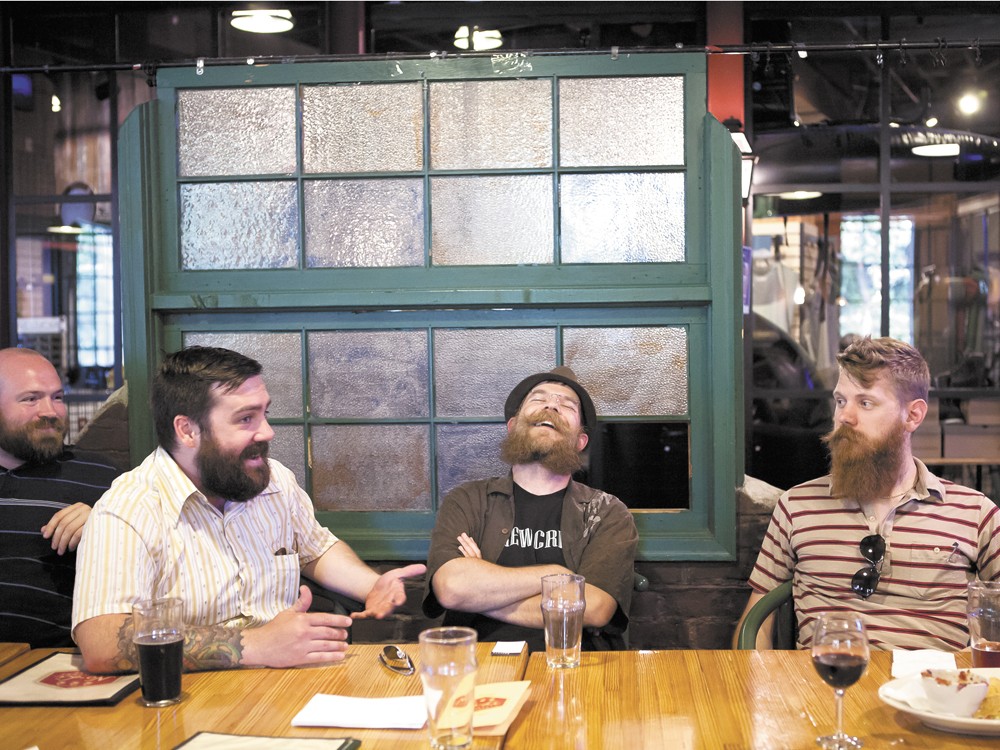 Stephen Schlange
\"We need more beards in Spokane,\" says Eric Bandholz, who founded Spokane Beard and Moustache Club.
Cream-colored foam from a No-Li Brewery stout gathers in the baleen-like hair of a man’s moustache. Beside him sits a guy with bushy chops and a Yosemite Sam moustache.

Across the table there’s Joe, clean-shaven in a button-down shirt. He says he’s “beard curious.” Across from Joe is Ted, a Viking-sized man in a stripped T-shirt.

He stands up and apologizes for his beard. “It’s usually much more robust than this,” he says. “I didn’t know this was coming up.”

Tonight, the Spokane Beard and Moustache Club convened for the first time. The group of 13 or so website developers, substitute teachers and full-time students, both men and women, made their introductions at No-Li Brewery over pitchers of beers and spicy-red chicken wings.

The club recently became a local chapter for Beard Team USA, the national organization that sponsors contests and represents the United States at international beard and moustache competitions.

“We need more beards in Spokane,” says club founder Eric Bandholz, tall with tousled blond hair and a reddish beard more than six inches in length. “Bearded people need to get together and prove that there are more awesome people out there.”

Spokane native David Larson, a 23-year-old nightshift employee at Wal-Mart, says he was blessed with a beard in high school. He wears thin, round glasses and a white polo shirt. He came to the meeting because he “genuinely cares about facial hair.”

He tells the group he “shaved his full beard off a few months ago to focus on his moustache.”

“I kinda modeled my moustache after Snidely Whiplash,” Larson says, referring to the villain in The Rocky and Bullwinkle Show. “I always liked his style. Not the whole tying-women-up-on-railroad-tracks thing, but his moustache style.”

Larson’s moustache snarls up around the edges of his mouth. He found the moustache wax pomade at Walgreens and the product seems to make his upper lip glisten, even under the dim brewery lights.

“My facial hair is one part fashion statement, one part social barrier,” he says, twirling the curly tips of his moustache. “I’ve always kind of been socially awkward. But just having this moustache gives me something to hang on to … and people in general just love my moustache. People shake my hand because of it all the time.”

The behemoth beards on Whisker Wars stars Jack Passion and Kenny Burke have become celebrities in their own right among their bearded followers who brush, wax and primp their facial hair. The show’s second season will air this winter on IFC.

Bandholz, the founder of the Spokane chapter, hopes to host local competitions and maybe even bring the regional championships to the area. A 30-year-old web entrepreneur from Charlotte, N.C., he moved to Spokane three years ago.

“I started growing my beard out when I moved here because I thought everyone in the Northwest had a beard,” he says. “I was really disappointed when I found out that wasn’t true.”

“Bearded people are the most wholesome, open-minded, free-spirited people in the world,” he says. “They see the world differently, they are not mean people, they are not assholes. … I think we can do a lot of good for the community.”

In North Carolina, Bandholz had belonged to Beards Because, a nonprofit organization that raises money for battered women through beard-growing pledge drives and events like “No Shave Novembeard.” With the Spokane club, he hopes to raise money for homeless veterans with what Bandholz describes as an “epic beard competition and fundraiser with so much alcohol and so many beards” this November.

Back at No-Li Brewery, Bandholz says he’s impressed with the turnout for their first meeting. He anticipates the club will find success in Spokane. And hopefully usher in an air of open-mindedness in the Inland Northwest.

“I want to make Spokane weird,” Bandholz says. “Beards fit into that weirdness.”

Mondays-Saturdays. Continues through May 9