Spokane's oldest neighborhood has everything — old and new homes, wild and wise people, diverse businesses and a park in the middle tying it all together

Mitch Ryals
Mary Moltke tidies up the garden of her historic Browne's Addition mansion that she now rents out for events.

— Roberts Mansion — when a plate torpedoed out the third-floor window of the house directly behind her. It shattered on the ground below.

That's when she knew she had to buy the place. This was in the early '80s. She's since purchased six other homes in Browne's Addition and turned them into apartments and rentals. One is a restaurant.

"It was so bad, when I raised my kids here, I would have to mark an area out with a fence, and then I would make sure there weren't any syringes in that area of the yard," she says now.

It took Moltke more than 20 years to restore the 127-year-old mansion made from brick and granite. Before she rented it out for events, it's where she raised her kids. Parents were hesitant to let their kids come over to play.

"I remember one birthday party where the parents were pretty snooty about the whole thing, so they came with the kids to make sure it was a safe environment," Moltke says. "Then they actually came down here and saw the house and what it was like. Whereas before it was like 'Uh, you live in Browne's Addition? I'm not goin' down there.'"

In the early days, Browne's Addition was home to Spokane's elite before its decrescendo into a crime- and drug-infested specter of those bygone days of horse-drawn coaches. Today, the neighborhood has been rebuilt on the hard work and persistence of passionate residents. In 2009, Browne's was named one of the 10 greatest neighborhoods in America by the American Planning Association. Some like the old-timey houses, the park and overlook bluffs on the far western border. For others, it's the proximity to downtown and the neighborhood's "walkability." For many, Browne's Addition is simply home.

Mitch Ryals
David Red has maintained the many eccentricities of his family's historic home.

In the shadow of the Patsy Clark Mansion — built for the mining magnate who handed over a blank check and asked architect Kirtland Cutter to spare no expense — stands a home you could miss, or perhaps avoid. At 2124 W. Second Ave., a dark green house shrouded by a thicket of trees and vines stands out among its neighbors. A faded red door, tin table and chair, stone panther statue, a birdbath and rusty lawnmower fill in the rest of the front yard. A sign reading "Gallery 1889" with a phone number intrigues passersby.

"Yard art," says David Red. He lives there by himself after his mother, Rhedi Red, died last year. David, 40, has lived there his entire life.

Gallery 1889 was a home-turned-museum. Rhedi and her husband James gave walk-through tours showing off art, clothes, handbags and hats. So many hats. They're all still hanging on the walls, and so are the paintings. Some by Rhedi herself, David says. He points to one painting of his mother done by the famed R.A. Fox that hangs above his bed. Soon, David plans to have an estate sale. The house is still chock-full of historic artifacts.

"This is my home. It's where I feel most safe," he says. He points to the park directly across the street. "I love the fact that I can walk 20 feet and be in the park."

Sitting outside Coeur d'Alene Park is a faded blue jeep that resembles a mini mail truck. The windows are covered with cardboard, but it still runs. It used to sit in front of the Rosauers at the edge of Browne's. Four men are asleep in the sunny grass in the park just beyond the rig. One of them arises to retrieve a bottle of Squirt soda, and stops to answer some questions.

He says his name is Richard Allen Brown. He's lived on the streets for four years.

Certainly, it's not illegal for Brown and his buddies to sleep in the park, but the fact that he and so many others do bothers some in the neighborhood. Christine White has lived in Browne's Addition for 11 years and heads up the Browne's Addition Garden Guerilla Gang, as they call themselves. The group of about 20 volunteers, who with the help of grant dollars, maintain plants and flowers in the park — the oldest in the city, marking its 125th anniversary this year — and in the traffic circle. Someone recently dumped motor oil in one of her planters. She can't say who for sure.

He came from Portland with his wife and young son in 1878. The lawyer John J. Browne saw opportunity in the village known as Spokane Falls. The river roaring through the center of town, he thought, meant potential for growth and prosperity. Good call, J.J.

For $2,500, the 35-year-old purchased a quarter-stake in the town of about 50 people, including a large stake in the water rights and 160 acres just west of the city center. The neighborhood boomed in the early 1890s as a haven for the city's elite. By the 1920s, the elegant homes were divided into single-unit dwellings and luxury apartment buildings went up. Post-World War II brought soldiers looking for single-unit apartments. In 1958, the neighborhood was rezoned to allow for a high population density. By 1972, nine prestigious mansions at the end of Second Avenue — one of which belonged to William H. Cowles, Sr., who founded the Spokesman-Review in 1894 — were demolished. Browne's original home lasted until 1975.

Since its beginnings, Browne's Addition has had the opportunity to sample nearly every shade of human existence — as though it couldn't decide on an identity. Now, it seems, it's settled on them all.

A gated apartment complex overlooks the bluffs, and some of the huge, old single-family homes now house six, seven, eight people. At one end of the neighborhood there's a barber shop across from a lawn where little old ladies sit on their walkers in the afternoon sun. At least two mansions are now occupied, in part, by mothers as young as 16.

Some people have been here their entire lives. Many left and came back. A few are there by accident.

"You've got everything from college students and artists to lawyers and doctors living in the neighborhood and being part of the neighborhood," says Dale Ringquist, who's worked at The Elk Public House for the past 15 years. "You have people just starting out, with nothing, and they're going to befriend people who are super successful, and they all blend together." ♦ 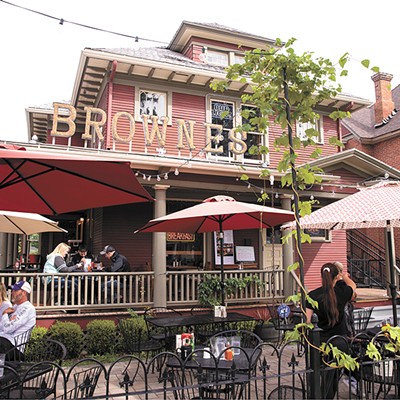