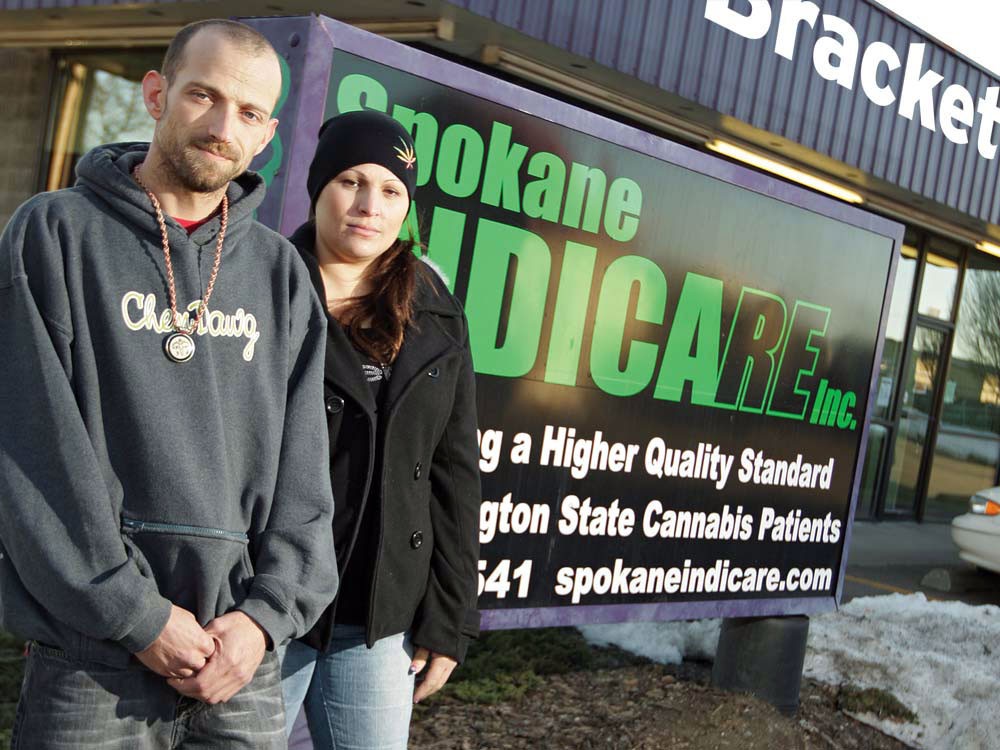 When Washingtonians voted in 1998 to allow the sick to smoke marijuana, the law was written in such a way that getting pot to those who needed it wouldn’t become a moneymaking endeavor.

But it has. And now the state wants in on it.

Last week, the state’s Department of Revenue sent letters to 90 medical marijuana dispensaries (pdf) informing them that the pot they’re selling is taxable, and the tax man is coming.

It’s a strange gray area for the state, considering the Department of Health’s stance that, “The law does not allow dispensaries. The law only allows qualifying patients and designated providers to possess medical marijuana.”

Considering all this, many local dispensary owners say they’re happy to pay the tax, if just for the sense of legitimacy.

“I feel good about it,” says Ryan Seeley, co-owner of Spokane Indicare, a dispensary on north Market Street. “If you’re a taxpaying business, you’re more acceptable to the community.”

Shops like Indicare are becoming a common sight in Spokane and across the state.

Traffic roars outside the store’s broad-windowed front. A large sign in the parking lot they share with an espresso stand advertises their wares, making obvious the nature of their business.

Inside, the walls are painted a soft green, a Christmas tree is draped with tinsel, and green stockings line the wall underneath the counter.

Though they hadn’t yet received a letter from the state, last week Seeley and his partner, Surisa Arispe, signed up to pay their monthly excise taxes via Indicare’s debit card. This week, $1,200 went straight from their account to the state’s coffers.

“It makes me feel safer,” says Arispe, who used to work for a financial firm setting up retirement accounts. So far, the only time the cops have come to their dispensary, Arispe says, was when she called them — after a customer tried to make off with their incorporation documents so he could start his own dispensary.

Now, with the state’s implicit blessing, they’re less worried about the legality of what they’re doing.

Local law enforcement takes a different view. “We view them as illegal,” says Lt. Gerry Fojtik, who works with the Spokane County Sheriff’s investigative task force and heads up the sheriff’s undercover drug unit. “We’d like a decision by the courts. … Are they going to allow these things or not?” Specifically, Fojtik is waiting for a certain trial to begin. It involves Change, the area’s first dispensary to be shut down by police in September 2010. The trial for that case was to begin this month, but has been delayed until February.

“If we can get a conviction, we’ll go after all these dispensaries,” Fojtik says. He says law enforcement is wary of raiding and shutting down all Spokane dispensaries because police could be financially “liable” for the equipment and plants if courts decide dispensaries are allowable.

“If we lose these cases, then we’ll have to strategize with the prosecutors office,” he says. “Ultimately, we’ll have to get a decision from the Attorney General’s office … [and the law] needs to be fixed by the Legislature” to figure out a way to lawfully provide sick people with medical marijuana.

“I find it odd,” continues Fojtik, “that the Department of Revenue comes out and says we’re going to tax them when it’s illegal.”

But according to the state Attorney General’s office, it all makes sense.

“The Department of Revenue enforces tax codes,” Kristin Alexander, a spokeswoman for the office, says in an e-mail to The Inlander. “The tax code is based on sale activities. There are no exceptions for illegal products or activity. … Just because a sale is determined to be taxable doesn’t mean that the sale is legal.”

Obviously, the illegality of pot didn’t figure into the revenue department’s thinking. Their hand-wringing came over the idea that medical marijuana is not prescribed.

“Just because a sale is determined to be taxable doesn’t mean that the sale is legal.”

According to state law, retail sales tax doesn’t apply to “sales of drugs for human use dispensed or to be dispensed to patients, pursuant to a prescription.” Since marijuana is classified as one of the most harmful drugs by the federal government, the state decided that physicians should recommend — not prescribe — marijuana, protecting them from federal prosecution. Because of this non-prescription, the revenue department found that sales tax is applicable.

Sunny Evenson, an owner of the Treehouse, a dispensary on Argonne in the Valley, says he generally disagrees with this interpretation, but has been paying anyway.

“We were concerned over the tax thing because the fact is it is medication,” he says. “But to legitimize, we needed to be paying taxes. There’s way too much money going in and out of theses places to not collect taxes. … We agreed it was better to pay [taxes] to be on the side of caution.”

Evenson isn’t sure how much in taxes his business will pay monthly, but last quarter the Treehouse gave the state $13,000.

Gowrylow wouldn’t estimate how much the new pot tax is anticipated to bring in, but if the state’s other 90 dispensaries pay similar amounts to the Treehouse, the state can expect about $5 million a year.