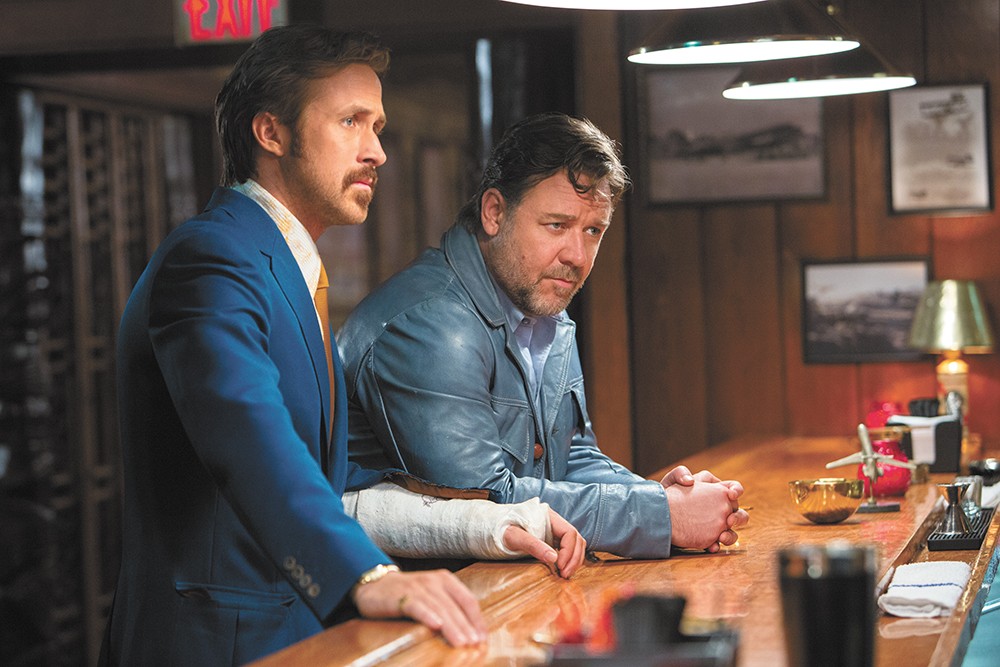 Ryan Gosling and Russell Crowe, together at last.

Shane Black knows his own strengths.

The writer/director's movies (from Lethal Weapon to Kiss Kiss Bang Bang to Iron Man 3) all tend to investigate similar themes: they often take place around Christmastime, they feature mismatched buddies who band together to stop a corrupt plot, at least one of the buddies is a lovable loser, a wiseass kid steals a few scenes, and the dialogue is a wildly entertaining and self-aware riff on tough-guy banter from 1940s noir films. Black's newest feature, The Nice Guys, plays with all these themes, but it doesn't feel anything like a retread. Instead, it's maybe Black's best film yet.

Set in late-'70s Los Angeles, The Nice Guys pairs a gruff hired goon named Jackson Healy (Russell Crowe) with an alcoholic, single-dad private eye named Holland March (Ryan Gosling). They bumble into a mystery that may or may not involve a porn star, killer bees, a missing woman, a ghost, the automotive industry and a brutally efficient hit man named Jon Boy. It's a comedy with occasional shocking bursts of sickening violence, and it's also a serious noir throwback with elements of farce. And if a scene gives you the sense that you know what's going to happen next, you are almost certain to be immediately proven wrong.

Like most of Black's best films, The Nice Guys thrives thanks in large part because of its casting. Over the past decade or so, Crowe has grown more and more unlikable even as Gosling has charmed the internet with his ridiculous good looks and his absolute unwillingness to choose easy paycheck parts. And so naturally Black flips the two public personas, making Healy a decent man at his core and tearing Gosling's meme-ready adorableness to shreds by making March an idiot, and a coward and an ugly drunk.

Both men clearly are having fun with their parts, turning in the kind of performances that could change the arcs of their careers. And they both get upstaged at several points by Angourie Rice, a teenage actor from Australia who plays March's daughter. When Rice is on-screen, The Nice Guys practically becomes an R-rated Nancy Drew movie saddled with two dimwitted grown-ups who keep wandering into her shot.

Those who go into The Nice Guys looking for a solvable whodunit will likely leave dissatisfied. The mystery unravels in part due to unbelievable amounts of luck and coincidence, and some twists are (I believe intentionally) telegraphed way in advance. But that's part of the appeal: the real mystery of the movie is what kind of a movie you're watching. At times, even as all the tried and tested movie cues (the soundtrack, a light touch to the dialogue) tell you that you're watching a happy scene, something very dark is unfolding in plain sight on-screen. What is Black trying to say with all of this? You're the detective; you figure it out.♦

The Nice Guys is not showing in any theaters in the area.