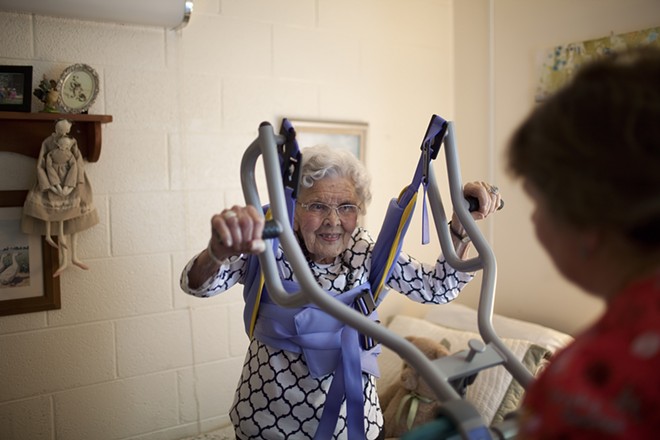 Khue Bui/The New York Times
Alice Jacobs, 90, at Dogwood Village, a nonprofit county-owned nursing home in Orange, Va., June 23, 2017. Medicaid, targeted by Republicans’ health care bill, pays for most of the 1.4 million elderly people in nursing homes, some of whom do not know they are on it.
BY THOMAS KAPLAN and ROBERT PEAR
© 2017 New York Times News Service

Senate bill to repeal the Affordable Care Act would increase the number of people without health insurance by 22 million by 2026, a figure that is only slightly lower than the 23 million more that the House version would create, the nonpartisan Congressional Budget Office said Monday.

Next year, 15 million more people would be uninsured compared with current law, the budget office said.

The legislation would decrease federal deficits by a total of $321 billion over a decade, the budget office said.

The release of the budget office’s analysis comes as a number of reluctant Republican senators weigh whether to support the health bill, which the majority leader, Mitch McConnell of Kentucky, before a planned recess for the Fourth of July.

McConnell faced a host of reservations from across the ideological spectrum in his conference. Five Republican senators have said they cannot support the version of the bill that was released last week, and McConnell can afford to lose only two.

The budget office’s findings will give fodder to Democrats who were assailing the bill as cruel. It could give pause to some Republican senators who have been mulling whether to support the bill — or it could give them an additional reason to come out against the bill altogether.

Earlier Monday afternoon, Senate Republican leaders altered their health bill to penalize people who go without health insurance by requiring them to wait six months before their coverage would begin. Insurers would generally be required to impose the waiting period on people who lacked coverage for more than about two months in the prior year.

In yet another rebuke from outside Congress, the AMA, the nation’s largest physicians organization, declared Monday, “Medicine has long operated under the precept of , or ‘first, do no harm.’ The draft legislation violates that standard on many levels.”

The insurer Anthem, on the other hand, offered some positive words about the bill, saying in a statement that it believed the Senate legislation would “markedly improve the stability of the individual market.”