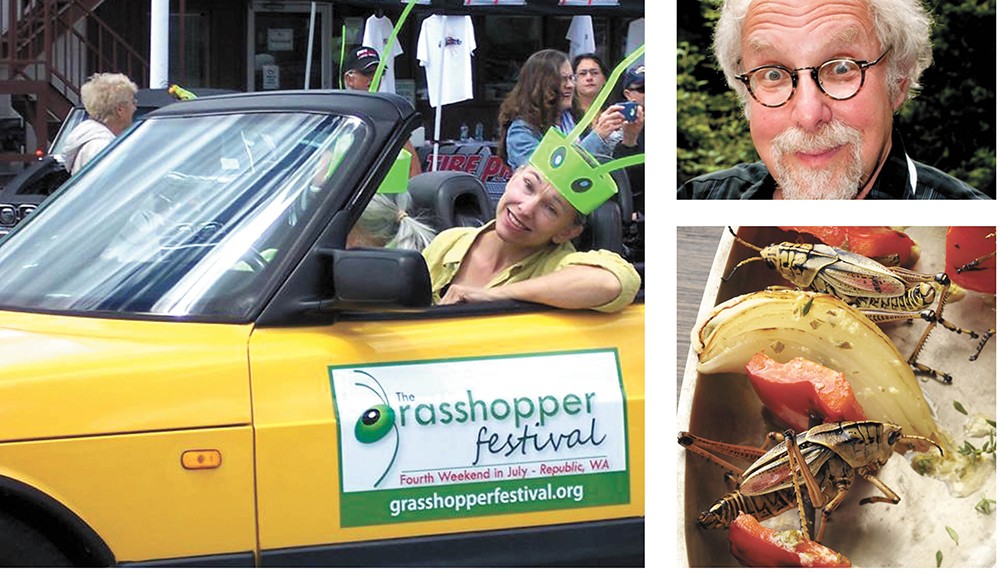 , but when the people of Republic take their revenge on the grasshoppers who the past few years have invaded the town 90 miles northwest of Spokane, they'll be serving the jumpy critters up cold, toasted, deep-fried — you name it.

This weekend marks the first-ever Grasshopper Festival in the town that festival founder Sarah Wilson calls "a quirky place, kind of the Sedona of the Northwest." Where better to throw a party "celebrating" the bugs that have decimated the town's gardens and yards, inspiring a Facebook thread last summer on which the locals fantasized about munching the bugs as payback?

"'They ate my raspberries!' 'My rhubarb is destroyed!' The revenge fantasies just burst forth on Facebook," Wilson says.

In the outrage, Wilson saw an opportunity to have a little fun. Summer festivals in America's small towns glorify everything from local history to strawberries to 4-H Club pig-raising showdowns. Why not a grasshopper festival in Republic?

The Grasshopper Festival will have all the typical activities: a parade, live music, face-painting for the kids, as well as educational panels about pest control and raising organic insects for human consumption.

The festival menu, though, will be the real star, as locals offer a wide array of grasshopper and cricket-based dishes, including cookies, breads, crackers and three flavors of barbecued grasshoppers: plain, spicy and sweet.

For help with the recipes, Wilson and her team of volunteers turned to David George Gordon, the Seattle-based "Bug Chef" who published The Eat-A-Bug Cookbook in 1998. He visited Republic in June and did a cooking demonstration so the locals could learn some of his recipes, and try some of his dishes.

"In Republic, I was very pleasantly surprised that the people were super-adventurous and tried everything I cooked, including a tarantula spider," says Gordon, who will return to act as grand marshal of the Grasshopper Festival parade.

Gordon, who's traveled the world to introduce people to the idea of eating bugs, says Republic has hit on a great idea with the festival. He thinks that people will truly enjoy munching on the grasshoppers when they have the opportunity.

"They're meatier and larger than a lot of the other bugs, and they have more crunch to them because of their body armor," he says. "I like to marinate them in teriyaki sauce, which gives them a little sugar and seasoning. If you do it right, they're quite tasty."

Wilson's first experience munching on a grasshopper didn't come from Gordon, but from one of the festival volunteers who showed up to a meeting with a Chinese takeout box full of homemade chocolate-covered treats dusted with ground almonds.

"Everyone said the same thing, 'It's like a Nestlé Crunch bar,'" Wilson says. "It's crunchy, but delicate-crunchy."

After finding out how expensive edible insects are, Wilson has visions of turning Republic into a grasshopper-producing powerhouse. The Grasshopper Festival, in the meantime, offers Inland Northwesterners the chance to visit Republic and nibble on something a little different. ♦