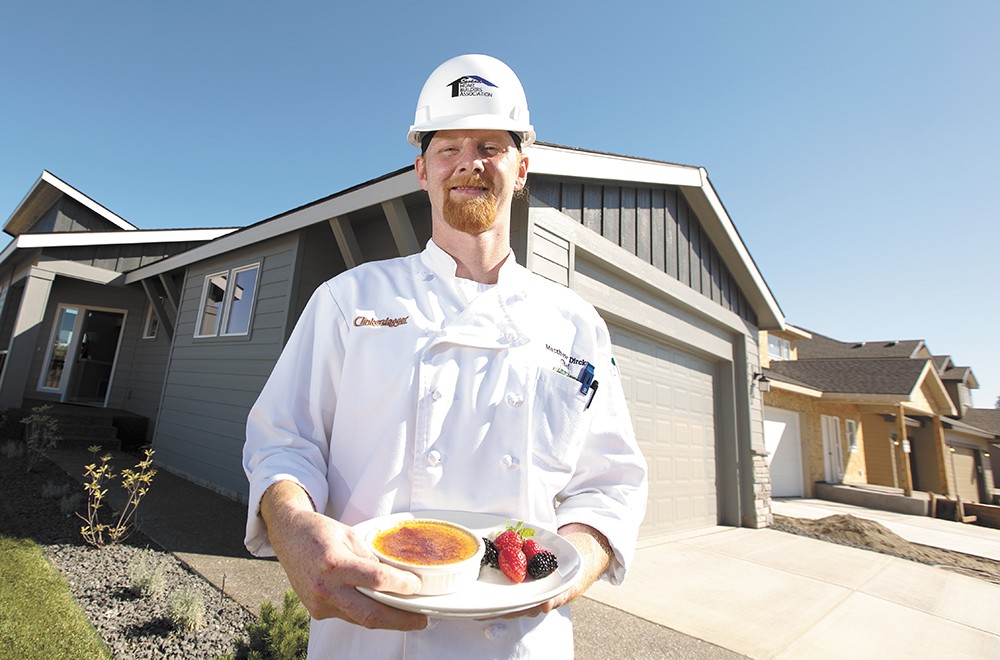 After wrapping up a long shift

as executive chef at Clinkerdagger, Matthew Dircks rarely wants to whip something up when he gets home. There's an excellent kitchen in his house; he even helped design it. But sometimes it's nice to leave your work at work.

That said, Dircks doesn't mind when his restaurant brings its food to someone else's kitchen, which he'll be doing at the first-ever Festival of Chefs. The event is part of the annual Spokane Fall Festival of Homes, which takes participants to newly built houses in the area to get a look at the latest building trends. This year the Festival of Chefs adds another component, bringing food from some of Spokane's most popular restaurants to be served in nine selected homes. The restaurants will serve their fare at different locations, enabling diners to taste their way from home to home.

Dircks says it's becoming increasingly common for chefs like himself to take their creations out of the restaurant.

"It's nice to get out of the kitchen from time to time. I think there's been a big boom with the Food Network, where celebrity chefs want to be out in the public," says Dircks, a career restaurant worker now in his sixth year at the helm of the Clinkerdagger kitchen.

His burnt cream will be featured at a house in the River's Edge Estates in North Spokane, not far from two of the other homes. Nichole Kerns, marketing coordinator for the Spokane Homebuilders Association, the group putting on the tours, says that given the distance between the houses, it would be tough for anyone to hit up all nine during the allotted four hours — unless there was some fast driving and even faster eating involved. She says that four houses, however, is easily doable. There are three clusters of houses — in North Spokane, Spokane Valley/Liberty Lake and South Spokane — making for easier navigation.

Another of the restaurants featured is the Women and Children's Free Restaurant, which doubles as the festival's charity beneficiary. The others are Wasabi Asian Bistro, Cake Bakery, Luna, Latah Bistro, Ambrosia Bistro & Wine Bar, Ferrante's Marketplace Cafe and Hay J's Bistro.

Kerns, who is heading up the project, says the Festival of Chefs, inspired by home-and-food tours that take place in other Washington cities, was a chance to bring two seemingly divergent industries — homebuilding and restaurants — together. It also makes walking through a new house a little more entertaining.

"It's a different way to experience the Fall Festival of Homes. Rather than just an open house tour, this is more of an event that they can enjoy," says Kerns of the tour, which also features entertainment and wine from local wineries.

For the foodies — and this event should feature no shortage of them in attendance — there likely will be a focus on the kitchen in these new homes. Dircks says there are a few features to keep an eye out for if you want to cook like a pro.

"When I remodeled my home, I designed it with a chef working in mind," he says. "You want a gas stove. That's a must. And hanging your pans is a big space saver."

He adds that you need a lot of space for a nice cutting block, rather than the roll-in-roll-out cutting boards that can be less than sanitary. And you need a fridge — preferably a stainless steel one — with plenty of room for the ingredients that will go into your creations. Since you likely don't spend your workdays in a kitchen, you can't use Dircks' excuse. ♦

Festival of Chefs • Thu, Oct. 2, from 4-8 pm • $35, ages 21 and up • tickets and list of participating restaurants at spokanefestivalofhomes.com