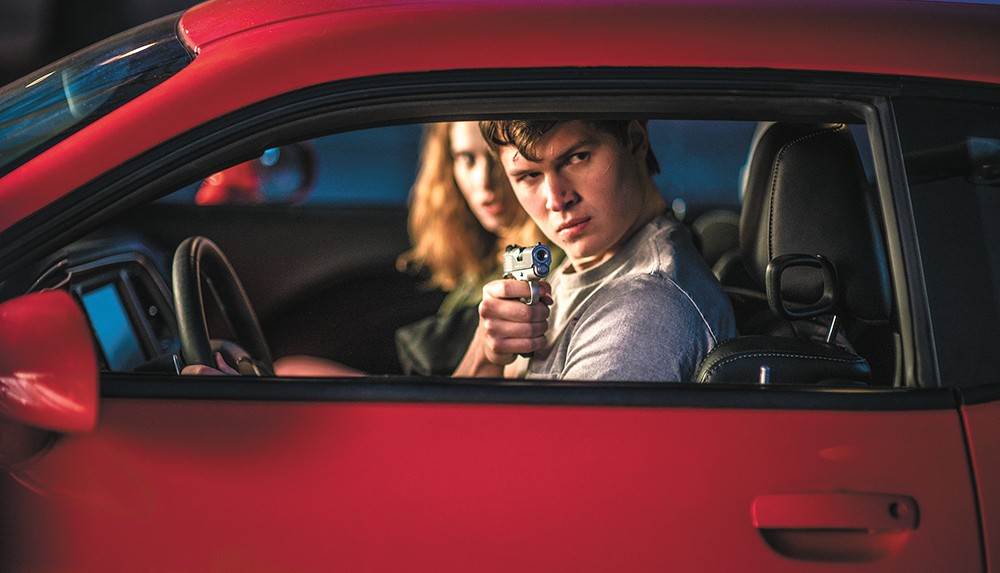 Baby Driver never lets its foot off the gas.

For decades, the best fast-paced cinematic action has been lazily labeled a byproduct of the MTV generation,

likened to the endless streams of music videos that conditioned audiences for short snippets of quick-cutting visuals. So perhaps it's appropriate that Edgar Wright's Baby Driver — a heist movie where the protagonist literally scores his own action scenes to make them into real-life music videos — would be the film to push things to the next level.

The film's action sequences aren't paced for the MTV generation, but for the Snapchat generation. When people become comfortable moving on to the next piece of content after 10-second bursts, action must almost literally be nonstop to keep viewers with short attention spans on the proverbial edges of their seats. Baby Driver does exactly that.

The titular Baby (Ansel Elgort) is an eccentric yet simplistic young getaway driver with a heart of gold. He's the consistent lucky charm of the dryly snarky criminal mastermind Doc (Kevin Spacey), a man who assembles fresh teams of criminals for each heist he plans. Among such degenerates as the homicidal loose cannon Bats (Jamie Foxx) and the tough-edged, excessively handsy couple of Buddy (Jon Hamm) and Darling (Eiza González), Baby is the odd straight arrow. While Doc functions as a pseudo father figure, it's clear that he's got the upper hand on Baby, who'd rather not be a criminal, get his hands dirty, or even be tangentially responsible for any death.

Baby Driver never lets its foot off the gas, continually picking up speed for its extended, frenetic stretches of stunning driving stunts (all grounded in a way the Fast and Furious franchise never was), robberies, shootouts, music and witty banter. With aid from a stellar soundtrack, Wright and his editing team craft pure, wonderful chaos energy. It's a colorful visual treat with an array of similarly vibrant characters, and performances that pop off the screen. And while Baby Driver isn't primarily focused on comedy like the writer-director's previous outings, it's still littered with jokes that all match the precision of Baby's turns, whether it's a return of Wright's genius channel-flipping edits from Shaun of the Dead, or confusion over the masks needed for one of the jobs.

Wright's script does a tremendous job building realistic and detailed rationales behind Baby's character quirks. Music is the throughline of his life, which can be traced back to his mother's melodious voice and his need to drown out the noise of household strife. He also has tinnitus, so he's always got earbuds in and blaring, overpowering the ringing in his years. He walks around with pockets full of various iPods preloaded with songs to fit his mood, essentially because he must have the right song to score his ace getaway driving skills (he'll even restart a track if needed to sync with his surroundings).

But the omnipresent music doesn't get in the way of his life because he can read lips, a trait that's surely enhanced by having a deaf foster father. Elgort manages to pull off all these eccentricities while being both humbly human and unflinchingly cool behind an ever-present pair of shades. It's a clear star-making turn (unless you're a tween girl, in which case Elgort is already a shriek-inducing superstar, thanks to The Fault in Our Stars).

But the biggest swerve Baby Driver delivers isn't one of Baby's high-speed maneuvers: It's that the film, at its core, is actually a super sweet and idyllic love story. Baby strikes up a relationship with a music-loving waitress named Debora (played with melt-your-heart innocence by Lily James). As they begin to fall for each other, keeping her safe from the dangers of his line of work becomes his driving motivation. Because of the chemistry between Elgort and James, it's immensely easy to root for these two authentically tender, love-struck kids.

Baby Driver offers adrenaline with heart; it's the type of kinetic filmmaking that instantly seeps into your bloodstream. Expect to feel twitchy and hyper-aware when you find yourself behind the wheel immediately after taking in a screening. Maybe just walk home, to be safe.♦

Baby Driver is not showing in any theaters in the area.