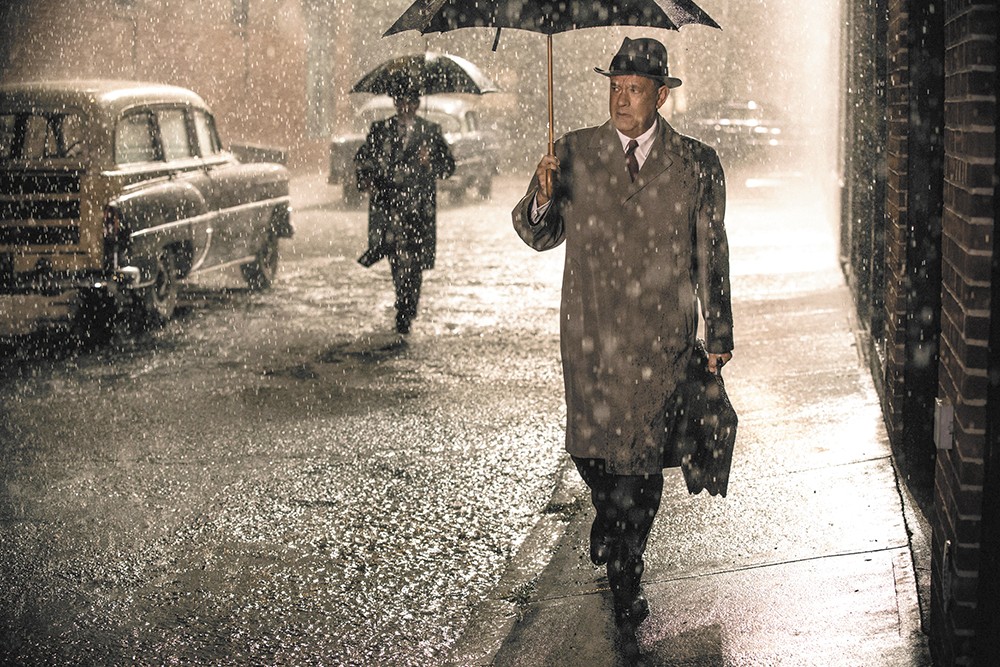 in Steven Spielberg's Bridge of Spies, he doesn't seem like the kind of Tom Hanks character we've come to know and love. He's wrangling with an opposing attorney about the disposition of a case he's working on, a car accident in which Donovan's client — the insurance company — has argued that it's on the hook only for one specific accident in which five separate motorcyclists were injured, limiting the monetary compensation. This feels like weaselly lawyer-speak, except that it's not; Donovan is absolutely committed to a concept of fairness that he thinks is essential in order for the system — any system — to function.

That's the Tom Hanks we know, our modern-day Jimmy Stewart, and that sensibility is crucial as Bridge of Spies unfolds. Set in 1957, it's the fact-based story of how Donovan came to be assigned as the public defender for Rudolf Abel (Mark Rylance), a Russian spy facing possible execution for espionage. The prosecution and judge want the appearance of a fair trial that holds up America's ideals during the peak of the Cold War, but they don't really care about whether it's actually fair. Unfortunately for everyone, except perhaps Abel himself, Donovan cares.

Bridge of Spies — as scripted by Matt Charman with a polish by Joel and Ethan Coen — plays out fairly baldly as an allegory for our contemporary approach to the War on Terror, as fear of an opposing ideology leads both government and private citizens to abandon principles when they prove inconvenient. We see Donovan's son indoctrinated in school into patriotism — Spielberg makes a sly cut from the courtroom at Abel's trial being instructed to "all rise" to the school classroom standing to recite the Pledge of Allegiance — and the seemingly imminent threat of nuclear war. Donovan pushes repeatedly for a representation of his client that's not merely perfunctory, even though there's not really any doubt regarding Abel's guilt. We don't win, Donovan insists, by putting Abel away during a show trial; we win by demonstrating the American principles we want to protect from The Other aren't just as threatened by our own desire for security.

Hanks' ability to make fundamental moral clarity and decency interesting is essential here, as Bridge of Spies eventually turns to focus on Donovan's role in negotiating the exchange of Abel to the Soviets for downed U2 spy plane pilot Francis Gary Powers (Austin Stowell). The film spends a surprising amount of time on Powers' training and preparations for his mission — up to and including an extended CGI-enhanced sequence re-creating Powers being shot down — and while it's thematically important to emphasize that both sides were doing the same thing that Americans were so enraged about Abel doing, the story starts to lose focus whenever it drifts from Donovan's mission.

There are more than a few places where Bridge of Spies feels clunky, inefficient or formulaic. Donovan's defense of the vilified Abel naturally results in people threatening him and his family, leading to the inevitable domestic conflicts as Donovan's wife (Amy Ryan) tries to dissuade him from his dogged pursuit of the case. And as Donovan's negotiations with both the Russians and East Germans take over the story — Donovan attempts to secure not just Powers' release, but that of a jailed American student — the sheer number of players in this diplomatic game of chicken becomes a challenge to navigate.

Yet there's still an edge to this story of sticking to a by-the-book sense of justice, as Spielberg shows us Russian snipers killing Germans trying to flee over the newly erected Berlin Wall in 1961. There's no attempt to whitewash the idea that totalitarian Communism was a genuine threat to freedom; the only question is how we react to that knowledge. When passengers on a commuter train stare holes through Donovan because they recognize him as Abel's attorney, then later look at him as a hero for his actions brokering the prisoner exchange, Donovan himself is the same guy. Through Hanks' performance we understand that whether it's hard or easy, doing the right thing is still doing the right thing. ♦

Bridge of Spies is not showing in any theaters in the area.