Local activists want to target corporate lobbying. But is city government the right place to start? 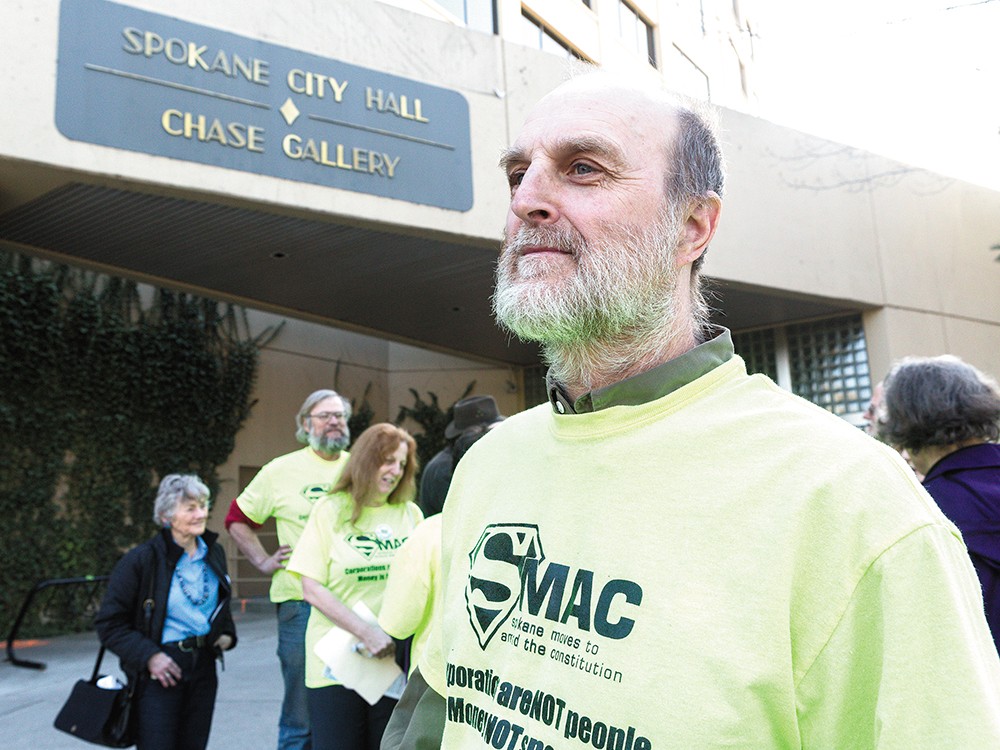 Stephen Schlange
Ted Hensold, a member of Spokane Moves to Amend the Constitution.

Around a pot of hot tea, a group of activists all wearing fluorescent yellow T-shirts talk about big ideas — about corruption, money as speech and politicians who are bought and paid for.

They’re issues planted firmly in the national political dialogue, but this group, Spokane Moves to Amend the Constitution or SMAC, wants to start addressing them here.

“They’re all tainted by the system. Nobody trusts elected officials anymore because this is the way things are run,” says SMAC member Ted Hensold.

The group is pushing for an initiative that would outlaw corporate lobbying at the city level. The initiative — for which the group gathered 4,520 signatures, 1,389 more than valid ones required — bans corporations from urging elected city officials to support or oppose pending legislation unless the communication happens in a public forum. It also bans corporate contributions in local elections.

The group, angered by the Supreme Court’s 2010 Citizens United ruling, says this effort is the first step toward the ultimate goal of a federal constitutional amendment banning the classification of money as speech.

“We can’t make a constitutional amendment happen, but what we can do is try to create an environment where this issue is out there and is being discussed,” says SMAC member Tom Bogley. “We know that a lot of people are dissatisfied with the system, but not everyone has yet tracked it to this particular problem.”

Some City Council members worry about the measure’s legality. They voted Monday to move the initiative on to the county to verify signatures, but are seeking legal advice about its constitutionality. If they believe it’s illegal, they can seek a court challenge, which could prevent it from appearing on the ballot.

“We’re going to have lawsuits out the ying yang” if the initiative turns out to be unconstitutional, says Councilwoman Nancy McLaughlin. “The minute we say to the people that this is OK, and if it passes, who’s going to get sued? The city’s going to get sued.”

Two cases from Bellingham seem to support the council’s worries. One case blocked an initiative requiring a citizen vote on the use of red light cameras, saying the initiative overstepped the bounds of initiative power because the Legislature had specifically given power to regulate red light cameras to cities, not voters.

Another focused on a Community Bill of Rights from a group called Coal-Free Bellingham. The initiative would have outlawed any corporation from transporting coal through town, and attracted a lawsuit from the city and BNSF Railway Co. Initiative supporters argued the state should allow the voters to speak before assessing the constitutionality of the issue. The city feared it would lose money and faith in the process by placing an invalid initiative on the ballot, and in the end a judge agreed, blocking the initiative.

Spokane City Council legal counsel Mike Piccolo says his department has not yet issued a formal opinion on the legality of SMAC’s initiative, and he won’t speculate on whether it will meet the same fate as Bellingham’s. But, he says, “obviously there’s been some discussion” on the comparison.

Spokane attorney Breean Beggs, who represented Coal-Free Bellingham during that case and has reviewed the SMAC initiative, says he doesn’t think a judge would prevent SMAC’s initiative from going to a vote but believes a court could later rule it unconstitutional.

“Citizens United only had to do with federal election law, not local, but it would be a hot topic,” Beggs says. “Someone would challenge it.”