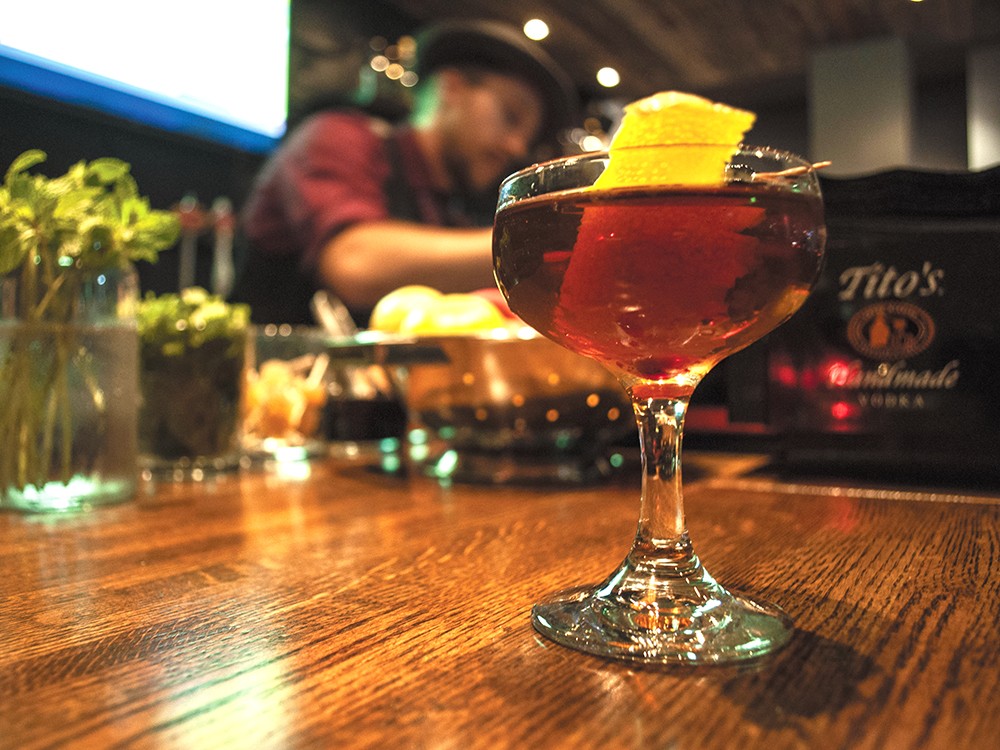 Sarah Wurtz
The ambidextrous cocktail is just one of the Volstead Act's lavish cocktails.

Almost 94 years ago, on Oct. 28, 1919, the Volstead Act was voted into law, setting the guidelines that soon after enforced the ban of alcoholic beverages in the U.S. By Jan. 17, 1920, the 18th Amendment, which established Prohibition, went into effect.

In the present, the Volstead Act is the name of a new craft cocktail bar in downtown Spokane, opening its doors to curious customers last week. Though the bar’s overall atmosphere was inspired by a 1920s-era speakeasy, the Volstead Act’s menu and contemporary decor offer a modern take on what’s become a trendy throwback to a bygone era.

The Volstead Act is owned by Matt Goodwin, the local restaurateur behind Press Public House on the lower South Hill, and the forthcoming Boiler Room, an artisan pizza restaurant and bar at Five Mile set to open by early November. He also co-owned the MarQuee, which closed over the summer.

Craft cocktails like those offered on the Volstead Act’s menu — using fresh-squeezed fruit juices, herbs and garnishes and unusual liqueurs, syrups and bitters — have been rising in popularity for a while now, catching hold first in metro areas like Seattle, Portland and San Diego, Goodwin says.

The thought behind the Volstead Act was to introduce a similar experience in Spokane. The bar’s signature drinks ($9), like the Kentucky Fields, with bourbon, cynar (a liqueur made from artichokes), lemon juice and strawberries, were created by Goodwin’s friend Ryan Walsh, a former Spokanite who now bartends at a craft cocktail bar in San Diego called Craft & Commerce.

Although Goodwin says the original plan for the Volstead Act’s interior was to create a vintage-feeling speakeasy setting, the space on North Post — most recently occupied by the short-lived French eatery Fraiche, and before that, Niko’s — with large, street-facing windows wasn’t conducive to creating a dark, underground feel. Instead, the cocktail bar’s decor, by HDG Design Group, features a contemporary modern feel, with a dark butcher-block bartop and utilitarian, black and red metal stools around bar-height tables. On the space’s focal wall, the front page of a January 1919 newspaper front page serves a dual purpose of wallpaper and art, with the bold, all-caps headline: “U.S. Voted Dry.”