BYU whoopin' up next? Gonzaga heads into Tuesday's WCC championship with a streak of 22 straight double-digit wins 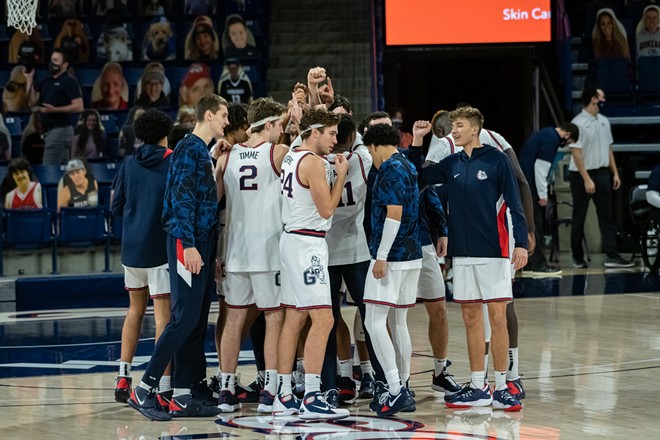 Erick Doxey
Gonzaga aims for a WCC championship tonight at 6 pm on ESPN.

As Monday came to a close and the clock ticked towards midnight, the Zags were still unsure who they would face off against in Tuesday’s WCC Tournament championship game.

Gonzaga dispatched its rival, the Saint Mary’s Gaels, with ease in the first semifinal of the night. The second game, however, was a much closer contest. The 2 seed BYU Cougars found themselves trailing the 3 seed Pepperdine Waves for almost the whole game. A late surge gave BYU the lead before Pepperdine great Colbey Ross, the all-time leader in scoring at the WCC Tournament, knocked down a runner as time expired to send the game into overtime.

There was a team in BYU that was firmly in the NCAA Tournament field regardless of what happened Monday and a team in Pepperdine that was very much on the outside looking in. The Waves were fighting for their season. Some, like the senior Ross, were fighting for their career. Over four seasons in Malibu, Ross has become a West Coast Conference legend. He leads Pepperdine all-time in scoring and assists, two records he claimed with nearly a season to spare. The point guard piloted a four-year run of improvement for his teams, each year climbing in the metrics and closing in on a winning record.

But in the end, he fell just short. BYU won 82-77 in overtime and Pepperdine’s season likely comes to an end with a 12-12 record. It’s a shame for one of the great, overlooked college basketball players in recent memory.

BYU is without question the better team. The Cougars were the first team left out of this week’s AP Top 25. They entered the semifinals 19th in the NET rankings, the NCAA’s primary sorting tool for evaluating teams across the sport, and 20th in Ken Pomeroy’s oft-cited analytically minded rankings. Pepperdine was nowhere close. Which meant Pepperdine was playing with house money. They had nothing to lose. It was win or go home for the Waves. And while they’re not on BYU’s level, let alone Gonzaga’s, the last team you want to face in March is a quality squad fighting to survive.

Instead, the Zags will get the Cougars on Tuesday night at Las Vegas’ Orleans Arena. A tougher test, no doubt, but perhaps the more favorable match-up. Especially considering the Cougars won’t get much time to rest. It was midnight before BYU’s postgame obligations were completed. The Zags had wrapped theirs three hours prior, and they hadn’t needed to claw back and survive in overtime beforehand.

In two meetings this season the Zags beat BYU twice, by an average of 14 points each time. Just two in what has been a run of now 22 consecutive double-digit victories for Gonzaga. According to ESPN Stats and Info, the Zags are the only men’s college basketball team to achieve that feat in the past 60 years. The Zags will look to stretch that streak to 23 games when they play in their 24th consecutive WCC Tournament championship game Tuesday evening. You have to go all the way back to 1997, two years before senior forward and WCC Player of the Year Corey Kispert was born, to find a tournament final that didn’t feature the Zags.

In that span Gonzaga’s amassed an 17-6 record in the tournament championship game. Against BYU in the final Gonzaga’s gone 3-0. Aside from Gonzaga, Saint Mary’s, the team Gonzaga beat 78-55 on Monday, is the only team to have won a WCC Tournament championship since 2008. And, again, the Gaels are gone this time around thanks to Gonzaga.

Now, all that stands between Gonzaga and an undefeated entrance into the NCAA Tournament are the BYU Cougars. We may not be at the madness quite yet, but it is March, so all that history will be put on hold for 40 minutes Tuesday in the desert.

NEXT UP
Top seed Gonzaga (25-0) takes on second seeded BYU (20-5) in the WCC Tournament championship game at Orleans Arena in Las Vegas at 6 p.m. Tuesday on ESPN.