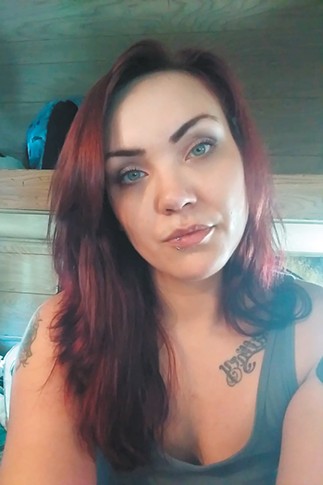 Soon after she is booked

into the Spokane County Jail before sunrise July 14, Cambrea Bishop calls her mom.

"She told me she loved me and asked if I would give her son a hug and a kiss," says Kelly O'Connor, adding that her daughter, who she calls Cami, sounded like her normal self. She wanted to serve her time and move on with her life after a recent drug relapse, O'Connor says.

Three women in jail with Cami say she was sick from drug withdrawal for the first few days, but by Tuesday, July 17, they noticed she was feeling better.

Around 9 am that day, Cami calls her mom again, but O'Connor is at work and unable to answer.

By 1 pm, just four hours later, Cami was found dead in her cell. She is now the sixth person to die in the facility since June 2017. Spokane County Sheriff's detectives are investigating Cami's death and jail officials say they can't comment during the investigation.

Meanwhile, family and friends cling to memories of the imposing 26-year-old, who stood every bit of 6-foot-1 and, her family says, "loved big" but didn't take shit from anybody.

"She often gravitated toward dark places," says her mother, who is in recovery herself. "Because she was a light, even when she was struggling."

that Cami tries to call her mom, she also takes a shower and asks for some food — both signs that she was feeling better from the drug withdrawal, says Cheryl Sutton, a friend who is also in jail. For the previous three days, Cami slept a lot and had almost no appetite, she says.

That day, after her shower, Sutton braided Cami's hair during morning recreational time. They returned to their cells just before lunch.

Cami's cellmate, Tanessa Wilturner, says Cami only took a couple bites of the Salisbury steak and mashed potatoes. After lunch, the two laid on their bunks while Wilturner read aloud from a book of daily devotionals and then a few chapters from a book. Around 12:20 pm, Wilturner put the book down to take a nap before the next rec time at 1 pm.

"She said, 'I'm tired, too,'" Wilturner recalls, and she fell asleep.

About 40 minutes later, Wilturner wakes to the sound of guards unlocking their cell door. When Cami doesn't respond, Wilturner nudges her.

"I saw her arm was purple, and I walked out and told them 'I don't think she's breathing,'" Wilturner says.

more than 100 people gathered at Mission Park to remember Cami.

Cami's brother, Mitch Bishop, tells about the time he yanked her front tooth out as part of a scheme to get some extra cash from the tooth fairy. She had a gap for several years, he says with a grin.

Brandie Brewster tells about the Valentine's Day when Cami showed up at her house with pink roses and a card.

"That's the type of heart she has," Brewster says. "She could have been hanging out with her friends or her boyfriend, but she spent Valentine's Day with me."

Jeffry Finer, a local attorney who defended Cami in a recent federal firearms case, recalls her statements to the judge during a sentencing hearing last year — a monologue he's heard clients deliver several times before. But this one stood out for its maturity and sincerity.

Cami talked about her mom as a role model for recovery, Finer says, and of her desire to stay clean for her son.

"We know people backslide in recovery," he says. "It happens, sometimes six or seven times, but losing this chance to really recover and to be the person who I know she was, and who her family knew she was, that's very bitter."

O'Connor, Cami's mother, has heard rumors that Cami died of an overdose. Although three women who were in jail with Cami say she was sick from a drug withdrawal, none of them, including her cellmate, believe she OD'd.

Each of them, however, say Cami wasn't given any medication to help cope with the withdrawal symptoms.

The jail has a program to continue treatment for inmates who are already enrolled in the Spokane Regional Health District's opioid treatment program, Sgt. Tom Hill says. But those not enrolled when they're booked are essentially forced to go cold turkey. Hill says the jail is now close to adding the drug buprenorphine to its withdrawal treatment plan.

"This happened on their watch," O'Connor says. "There's a young child who will spend the rest of his life without his mother. That's their only job, to supervise and keep people safe in the jail, and they failed to do it. I'd like some answers." ♦