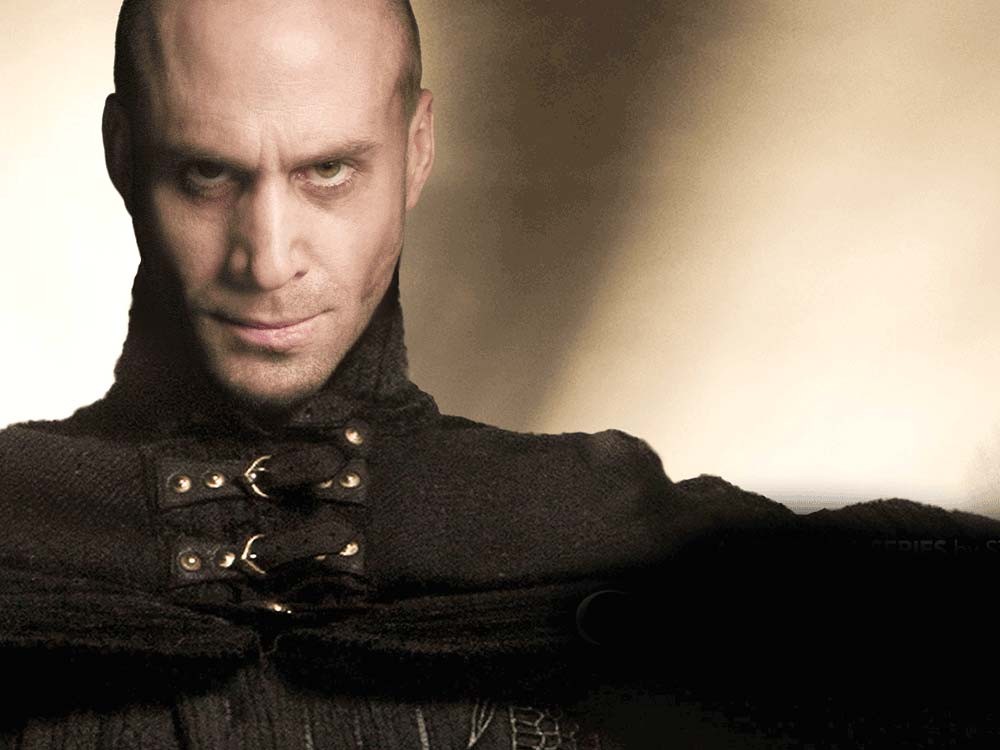 Joseph Fiennes as Merlin: “See this frown? It’s magic. I will hurt you with my magic frown.”

Still, any new twist is welcome when recreating a tale that has been wrung out this thoroughly. Talking owls, a feminist Guinevere, and Richard Gere in a chest-baring tunic? It’s already been done.

This Camelot is pre-Lancelot, and pre-Arthur’s facial hair. The king is pitted against his sorceress half-sister Morgan (Eva Green, Casino Royale), who has a power complex and puts hexes on things to make up for it. Her relative morals and changing motives keep her character two-dimensional, even if it’s a little unclear at first what her place in the plot is (or why the hell Arthur’s castle looks like the ruins from The Jungle Book).

The series has other problems, too. The sweeping Irish setting provides real eye candy, but the dialogue, at times, has all the intellectual sophistication of a Pop Tart.

And then there’s Arthur. Jamie Campbell Bower (Harry Potter, New Moon) is flaccid as he tries to channel Legolas from The Lord of the Rings. He’s a fledgling monarch without much potential, and he’s nearly upstaged by foster-brother Kay (the delicious Peter Mooney), who is enigmatic and more convincing onscreen.

As Merlin, Joseph Fiennes (Shakespeare in Love) extends his family’s propensity for wizardry (brother Ralph plays Voldemort in Harry Potter films), but so far, Fiennes’ acting is uncharacteristically average. His Merlin’s unconventional tendency to abstain from exercising his powers, however, does create anticipation for when he finally whips out a wand and blasts somebody’s ass with magic.

Camelot is entertaining in a WB kind of way. Just remember, this is the Growing Pains version.

Keep that in perspective while characters develop and Arthur learns to keep it in his pants.

Oddities
The first time I saw this show, I was cooking dinner when a girl brought in a preserved pig fetus to the Obscura, Antiques & Oddities store in Manhattan and asked how much she could get for it. I stopped cooking but kept watching.
What’s kookier than cow spine lamps, fingernail art or dinosaur poop? The people who purchase them. (Thursdays, 10 pm, Discovery Channel)

Sports Show with Norm MacDonald
Comedy Central is riding a sports-snark high — first with January’s Onion SportsDome, and now this. If you’ve been pining for the days when the god of deadpan comedy read the news on SNL’s “Weekend Update,” catch Norm MacDonald delivering poker-faced perspectives on a range of popular (and obscure) sports topics. Maybe he’ll swap out Burt Reynolds for Charles Barkley and relive the Turd Ferguson/Jeopardy sketch. That would be money. (Premieres Tues, April 12, 10:30 pm, Comedy Central)

Extreme Couponing
Congratulations, reality TV. You’ve officially ground down whatever sense of acme the term “extreme” once invoked. Forever. So are you a super-couper? In this new series, first you’ll learn from shoppers who are and then you’ll clip your way though the recession. (Wednesdays, 9:30 pm, Comedy Central)