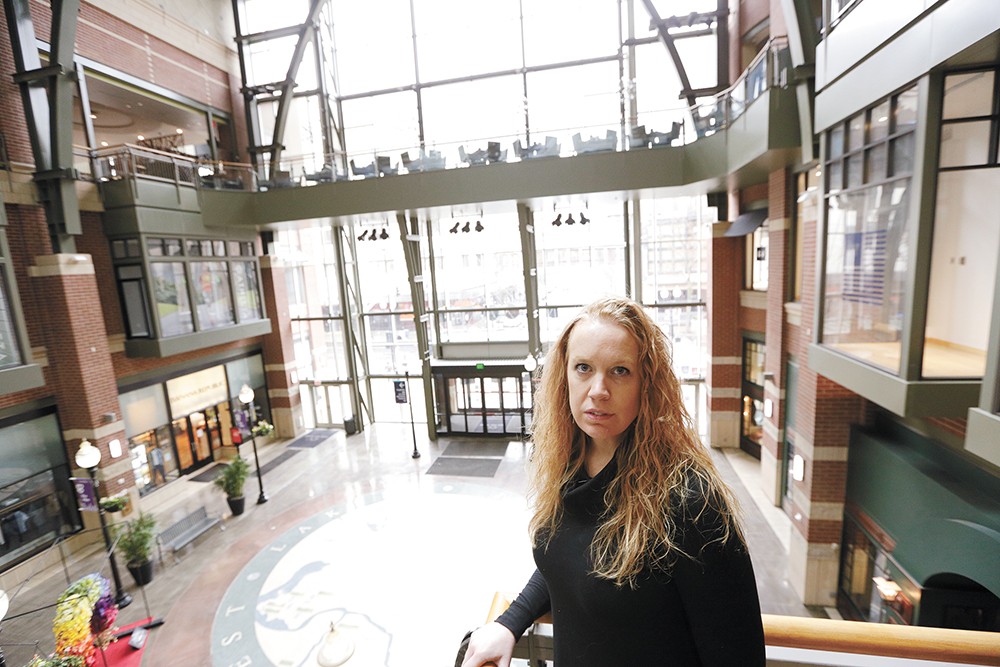 Young Kwak photo
Bryn West, vice president of the property management company that owns River Park Square: "We're trying to keep as many people employed as we can during this time."

The last time the River Park Square shopping mall in downtown Spokane was shuttered — 40 years ago — it was due to a 24-megaton volcano blast that rained ash over the entire state.

But if anything, the coronavirus outbreak is a natural disaster on a larger scale than the eruption of Mt. St. Helens. Since last Wednesday, would-be visitors to the mall have been greeted with a "No Public Access: Building Temporarily Closed" sign taped to the locked doors.

"We're trying to keep as many people employed as we can during this time," says Bryn West, vice president of the property management company that owns River Park Square. "We employ as many people as a small city. It's really hard to see all those jobs go away."

Twenty-five years ago, the city of Spokane risked tens of millions of dollars to build a parking garage at the mall to save downtown retail. Since then, the city has fought numerous battles on behalf of these businesses — taking on street kids, traffic flow, panhandlers, sidewalk musicians and homeless campers. Last year, a businessman spent $100,000 during the mayoral race to produce a film called Curing Spokane that focused not on a contagious disease, but on downtown vagrancy and drug use.

Suddenly, all those debates have been made irrelevant: This time, Spokane actually is dying. As long as Washington Gov. Jay Inslee's stay-at-home order is in place to combat the virus, downtown remains a ghost town, and layoffs are skyrocketing.

Meanwhile, local leaders have been scrambling: How do we stop entire sectors of the region's economy from collapsing? And how do we resurrect the city when the virus's danger has passed?

"Downtown, before all this happened, was on such an upward swing," West says. "We expect that once this is over, we are definitely coming back."

The question is how many other businesses will be able to say the same.

On Thursday, the Spokane mayor's Economic Recovery and Stimulus Task Force held its first meeting — though not in person, of course.

The first step? Assessing the damage.

Patrick Jones, an economist at Eastern Washington University, delivered a presentation that gave the group a taste of just how brutal the shutdown has been so far.

"The unemployment rate in Spokane in the last big downturn, in the Great Recession, peaked at 10.1 percent," Jones tells the Inlander. "Next month, we'd be looking at a 33 percent unemployment rate."

Spokane's biggest industry — health care — is stable. But in sectors like food service and hospitality, 14,500 jobs already have been lost, at least temporarily.

It's placed businessmen like local Subway franchise owner Terry Weir in a nightmare situation. His Subway in River Park Square has already been shuttered, but he has to figure out what to do about the other eight restaurants he owns in the region.

"I'm trying to do the right thing morally and ethically. On one side, I'd say, maybe I'd be better off if I just shut them all down temporarily," Weir says. "But my employees are saying, 'We need the hours, I can't afford to pay my rent, keep them open.'"

He's been offering customers two-for-one footlong takeout deals, but some stores are still seeing a 60 percent to 70 percent decline in sales. Weir says he's trying to make enough money to pay their food vendor and employee salaries, while rent and utilities have been coming out of his pocket. He's been asking his landlords for slack, something he says he should have done months ago.

"I should have reached out to the landlords on day one of the coronavirus, when I saw what was happening in China," Weir says.

A month ago, of course, Greater Spokane Inc. had no idea its mission would be upended like this. One moment you're trying to boost Spokane as the ultimate place to do business, and the next you're just trying to help the existing businesses to survive.

"The majority of people's time and energy is currently focused on response and crisis and survival," GSI CEO Alisha Benson says. "We retooled our entire website to have our regional landing page for COVID-19 resources for the business community."

Their "Small Business Toolkit," for example, includes templates for those "our business is closing due to coronavirus" letters that are plastered in the windows of businesses downtown. It also includes an updated document with resources to help, ranging from the United States Bartenders Guild Emergency Assistance Program to the Spokane Hospitality Workers Emergency Relief Fund.

But more help is on the way: This weekend, Cara Coon, GSI's vice president of communications and public affairs, poured over the 820 pages of the $2 trillion rescue package that President Donald Trump just signed into law, trying to understand how it could impact local businesses.

It gives every adult making less than $75,000 a year a $1,200 check, with an additional $500 to families for every child. Unemployment benefits have been expanded and offered to those in gig-economy jobs like Uber drivers and Airbnb hosts.

Billions were dedicated to stabilizing struggling hospitals and to bail out corporations.

But for small businesses, the best part is the "Payroll Protection Program" from the Small Business Administration. Businesses can apply for loans to pay for employee salaries, mortgages or rent for the next eight weeks. The best part? If they don't lay off employees or slash salaries too heavily, the businesses could qualify to have the entirety of that loan forgiven.

"That loan-forgiveness program is incredible," says Jeremy Field, regional administrator for the SBA. "It's going to help a lot of people in that eight-week period."

The details are still being worked out, Field says, but some loans could be issued as early as Friday.

"That is what will allow us to pay our employees and our landlords and the utility company," Weir says. "If this thing only lasts two months, that stimulus package should be enough to carry us through."

In the next few months, other spigots of aid are anticipated to open up: Benson of GSI notes that the Washington State Department of Commerce plans to start offering additional small business grants. At the city of Spokane, Councilwoman Candace Mumm says the mayor and the council are trying to identify where the holes are in the safety net that the state and federal government are rapidly weaving.

Mumm suggests the city might take the same sort of small business loans they used to help local businesses survive the Monroe Street construction process and apply it citywide.

If hearing about the flurry of new programs, grants, loans and tax incentives raining down from all levels of government makes your eyes glaze over, the City Council wants to address that, too. Council President Breean Beggs proposes the creation of several navigator positions, in order to help lead small businesses through the bureaucratic labyrinths.

In the meantime, Coon says, some businesses are rapidly trying to figure out what they can do to save lives and reduce the virus' spread. Around 10 local manufacturers, Coon says, have already said they're willing to alter their product line to churn out goods needed to combat the coronavirus.

Still, it's hard to stimulate the economy when most of it is shut down. While Washington state has managed to slightly slow the infection rate of coronavirus cases, it could be a while before the governor begins easing shelter-at-home restrictions.

On Sunday, even President Trump abandoned his rosy vision of reopening packed churches on Easter, acknowledging that the federal social-distancing recommendations will last at least until the end of April.

So for now, the doors of River Park Square and other local businesses will remain closed. It's eerie, West says. She's been in a locked and empty mall before, but only while working at River Park Square late at night.

"That's kind of what it feels like: A never-ending night," says West. "I keep waiting for the day to hit when the lights flip on." ♦

The original print version of this article was headlined "Curing Spokane"