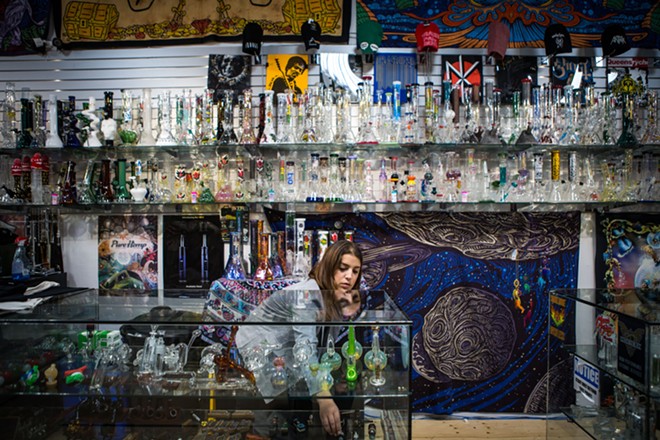 Chris Donovan/The New York Times
Lacey Macmurchy, an employee at BBFs head shop, arranges glassware in a display, in Toronto, Oct. 12, 2018. Canada on Oct. 17 became the first major world economy to legalize recreational marijuana use, beginning a national experiment that will alter the country’s social, cultural and economic fabric, and present the nation with its biggest public policy challenge in decades.

MONTREAL — Canada on Wednesday became the first major world economy to legalize recreational marijuana use, beginning a national experiment that will alter the country’s social, cultural and economic fabric, and present the nation with its biggest public policy challenge in decades.

Newfoundlanders became the first Canadians to be able to smoke pot legally, when retailers there opened in the country’s easternmost province at midnight.

Across the rest of the country, government-run stores were preparing to greet consumers, who will be able to choose among prerolled joints, fresh or dried marijuana flowers and cannabis oil — all of which are permitted under the new federal law.

And pot enthusiasts from Montreal to Winnipeg to Calgary were getting their bongs ready for “End of Prohibition” house parties.

The government was set to announce Wednesday that it will make it easier for Canadians who were convicted of possessing small amounts of marijuana to obtain a pardon, said a government official familiar with the plan.

“The fact that we are moving away from a Prohibition model is a victory for human rights and social justice, an economic windfall for the Canadian economy and a sign of social progress,” said Adam Greenblatt, a director at cannabis producer Canopy Growth.

Others were more cautious. “Legalization of cannabis is the largest public policy shift this country has experienced in the past five decades,” said Mike Farnworth, British Columbia’s minister of public safety.

“It’s an octopus with many tentacles,” he added, “and there are many unknowns. I don’t think that when the federal government decided to legalize marijuana, it thought through all of the implications.”

The Canadian Medical Association Journal called the government’s legalization plan an “uncontrolled experiment in which the profits of cannabis producers and tax revenues are squarely pitched against the health of Canadians." It called on the government to promise to change the law if it leads to increased marijuana use.

But the so-called “green rush” is already on, in what is expected to be a $5 billion industry buttressed by the expected arrival of thousands of pot tourists from across the border in the United States.

A beginner's guide to using cannabis in Washington state