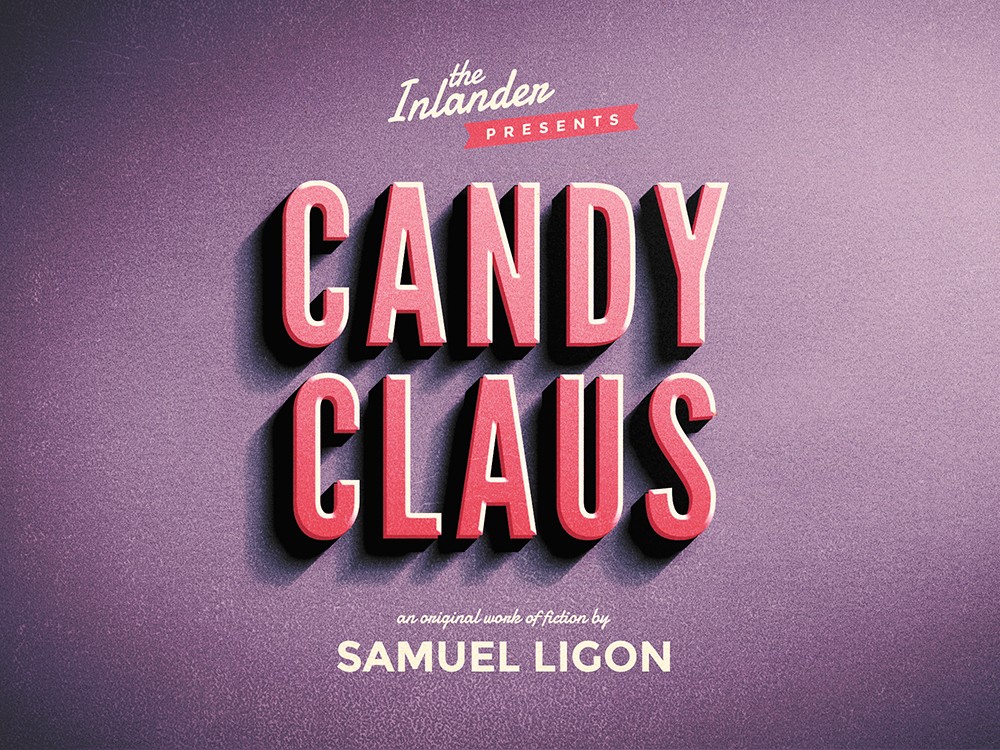 She came at closing time, three nights before Christmas. Darla was up front, doing what she did with the office machines, while I sat in back, wondering how long I could keep the walls from closing in. Darla buzzed me and said, "You're going to want to see this one," all whispery. "Seems real nice."

Uh-huh, I thought. They all seemed nice when they first walked in, and Darla liked nice. She had four asthmatic cats, a crippled Chihuahua, and a husband doing a long stretch down at Walla Walla for aggravated assault. Still, she wanted everyone nice, everyone holiday cheerful. She wanted me to want that too, to find a nice bride, for instance, the two of us early to bed and early to rise, and raising a litter of citizen saps. She had no idea how Candy had ruined me, how far I'd fallen.

She knocked and ushered in the twist.

And the twist was nice, healthy, too, filling out her velvet dress and looking as good as the last time I'd seen her, when all she'd been wearing was lipstick and powder.

"Wouldn't give me her name," Darla said in a whisper voice everyone could hear.

Mrs. Claus looked at me through the gauze of her veil, a pathetic attempt to hide her face. She took a seat on the other side of my desk, crossing and uncrossing her legs.

Darla closed the door on her way out.

Candy Claus took out a cigarette, tapped it twice, and put it in her mouth.

I reached across to light it, watched her sit back and cross her legs again. She dangled her ankle bracelet, the diamond charms sparkling against her long bare leg. She wanted me to wonder where it would all end.

"Won't he notice you gone this time of year?" I said, pulling out the bottle and glasses from my bottom drawer. "Aren't you supposed to be fattening him?"

I poured a drink, pushed it across the desk. Poured another for myself.

"He doesn't even know I exist," she said, dangling the charms against her ankle. I watched her shake those diamonds, then looked at her face.

"You're pretty good at making men know you exist," I said.

"Johnny, I can't stand it anymore," she said, "him all sweaty, like he gets, if he gets anywhere near me — which he won't. That's what eats at me. How he won't even touch me. The kink, back before, I could stand."

I didn't want to hear about the kink.

"What about his helpers, Johnny? You always said the elves were good eggs."

"He's turned it all upside down," Candy said. "The naughty kids are getting the good swag."

"And everyone else is getting the bad boy rocks. The whole pole's covered in coal, just waiting to be delivered."

Maybe that wasn't such a bad thing, I thought. Maybe that's just what the world needed, more coal smeared all over it.

"We gotta stop him, Johnny."

I poured another drink, took a long swallow. I'd never been dame dizzy like I'd been with her. She'd hired me to take pictures of him with his broads, the woodfolk and elves, but I couldn't get anything on him. She told me about the giant molds of green and red Jell-o he insisted they make their bed on, the special shows he had the elves perform. He would never be true to one woman, she told me, over and over, but she went back to him the second he came crying to her about needing his Candy Claus, the whole world needing their Candy Claus. I thought she had it as bad for me as I did for her — that's the kind of sap I was — but him showing up with a sable, crying in his beard, was all it took to win her back. I had plenty of reasons for wanting him dead, my own simmering hatred, but I wasn't going to do it. Not tonight and not ever.

What did I care about the good kids? Let them have coal. Let them have shivs and roscoes. Torn stockings full of rocks would teach them the big grift, how the rich got diamonds and glad rags, while the rest of us got bricks.

"Nothing can be like it was," I said, but she touched my hand and something sparkled, and whether she was lying or not didn't matter.

"Pour me another," she said.

I poured her another.

"Make me forget," she said. "Make me remember."

I kissed her, tasting liquor and smoke, candy and meat and fruit on the edge of rot.

She pulled away, put her hand on my face. "Christmas eve, Johnny," she said. "When he least expects it."

I kissed her and felt myself falling all the way into dizzy.

I remembered how it had unwound last time, the fat man crying and making promises, and Candy demanding control of the list, which he wouldn't give her, though he told her she could have some say. But nothing would ever be enough for her.

"The fat man gets rubbed, and what do I get?"

But I wasn't biting — not after she'd left like she did, with pieces of my heart in her teeth. I knew what she wanted with that list — more toys for the nice kids and more than just coal for the naughty ones. Poison she'd give them, in sugar plums and candy canes. We'd be in bed, cooling with a smoke and champagne, and she'd wonder — why not kill the naughty ones? Their parents couldn't do it, maybe, but why not somebody else, somebody jolly? Killing the naughty kids would be a Christmas miracle. Every year.

"That's why we're perfect, baby, why we should take it all over."

"Knock off the waterworks," I said.

She lowered the shoulders of her velvet dress. But I wasn't going to look. I was done with her, with the fat man, with the naughty and nice.

"He hits me, Johnny," she said, one tear and another running down her cheek. "He won't make love to me, but he hits me."

There were yellow and purple stains smeared over that porcelain skin of hers. I didn't recognize them as hoof marks. Not then. It would be a few days before I figured it out, how Blitzen and Cupid had marked her to make a sap of me. I didn't know anything then, couldn't see anything but the red of my rage. I was sick with it, sick with her.

But I knew how I'd take him out — with a shiv in his jelly, leaving him wedged in a chimney till somebody smelled his rot.

I kissed her. We only had a few days in front of us, but every one of them would be like Christmas — until she came for me. She knew I'd always be on the naughty list. So would she. And when she came for me I'd be packed and ready. ♦

Samuel Ligon's second novel, Among the Dead and Dreaming, comes out next year, as does Wonderland, a book of his short stories illustrated by Stephen Knezovich. He teaches at EWU and edits Willow Springs, the university's literary magazine.

How to Stop Working and Start Living