Some of the hardest-working musicians in the Inland Northwest, plus the venues to catch great live music

There are a lot of blues guitarists in town — in fact, there are quite a few on this list — but Eubanks is certainly one of the best known and most active. He's also a co-founder of the Inland Empire Blues Society, which doles out awards for musical excellence every year; Eubanks and his backing band have won several themselves.

Recently voted one of the best local songwriters by Inlander readers, Brown runs a popular Monday night open mic at the Red Room Lounge, where he's also a talent booker. He isn't merely a solo troubadour, either: He's also a member of the roots-rock band Hey! Is for Horses and the blues collective Breadbox.

Glancing at this acoustic guitarist's live calendar is enough to make your eyes cross. He's one of the busiest solo musicians in town, focusing primarily on originals with a handful of covers thrown in for good measure. According to his website, he'll be releasing an album of his own material sometime this year.

Since quitting her day job as a dental assistant and focusing on music full-time, this local singer-songwriter has been playing all over town, mostly doing acoustic gigs but sometimes performing with musical accompaniment. O'Neill's most recent album, Unrequited Love, is filled with bluesy, folksy and emotionally candid originals.

This solo guitarist's name pops up on local listings several times a week, playing wineries, breweries and bars all around the Inland Northwest. He specializes in gritty blues and R&B, and he's also claimed Motown and even hip-hop as influences; check out his album Trouble Water to hear what he's getting at.

A self-described "one-man band," PJ Destiny is a real stalwart of Idaho's music scene: The guitarist has a weekly gig at the Coeur d'Alene Casino's Nighthawk Lounge, and his band JamShack, which specializes in high-energy cover songs, also performs regularly at the casino.

A local four-piece that's the ongoing project of guitarist and songwriter Daniel Mills, who also frequently performs around town as a solo act. (The group gets its name from Mills' late father, a journeyman jazz musician.) The band's debut record Evergreen offers chill, melodic rock that's twinged with folk influences.

That name says it all: Darin Hilderbrand performs all by his lonesome, but his work is hardly simplistic. It's somewhat surprising that Hilderbrand was once the frontman for the Seattle metal band Kidd Robin, as his solo material is inspired by classic rock and blues sounds, but that further proves his versatility.

Greene is a staple of the Idaho music scene, performing his soulful, melodic originals multiple times a month in the Coeur d'Alene and Post Falls area. He also fronts the band Gre3ene, which recently opened for New Orleans-based multi-instrumentalist Trombone Shorty at the Fox Theater.

This husband-and-wife duo comes with a bit of indie credibility, as an album Emerson recorded with his brother when they were teenagers was rediscovered by music blogs a few years ago. He and Sophia — he plays guitar and they both sing — perform songs from all kinds of genres, and when they're not performing as a duo, they're backed by a band of ace players.

Another local guitarist who always seems to have a new gig every other day, Kicho Forrest isn't easily boxed in, channeling heavy metal one moment and delicate folk-rock the next. And as if he weren't busy enough as a for-hire musician, he has his own music studio and also works as a local guitar teacher.

A true career musician, KOSH has been performing for decades, both as a solo artist and as the frontman for rock bands. His originals recall the era of the '80s when hard-rock power ballads ruled the airwaves, while his catalog of covers include his unique takes on everyone from Radiohead to Adele to Pink Floyd. 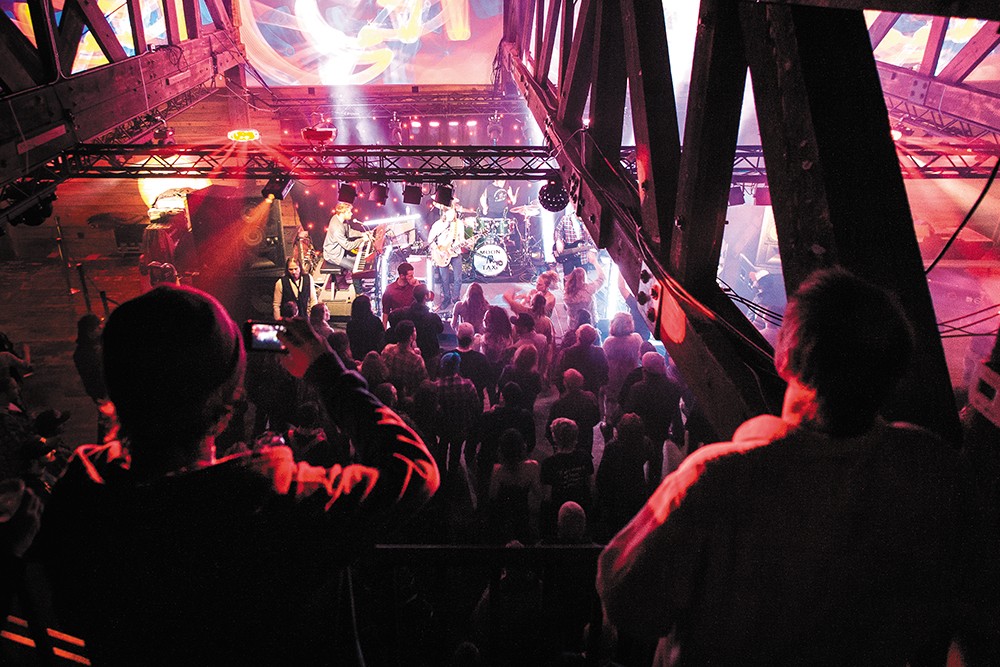 Mike McCall
The Hive in Sandpoint specializes in funk, R&B and jam bands.

SOME GREAT PLACES TO SEE LOCAL AND TOURING ACTS

It's a small place — they don't call it "Baby" for no reason — but this watering hole/burrito joint, adorned with garishly awesome velvet paintings, puts on some of the most high-energy shows in town. You're most likely to see some grungy garage rock or noisy punk here, but the occasional indie pop band or acoustic singer-songwriter turns up, too. 827 W. First Ave., Spokane • 847-1234

Since opening in late 2013, this hip all-ages spot has lured a diverse array of musical acts to Spokane, from folk and country artists, to rock and electronic acts. But it's not just music you'll see at the Bartlett: Owners Karli and Caleb Ingersoll frequently open their stage to poets, comics and open mic performers. 228 W. Sprague Ave., Spokane • 747-2174

With its blue brick exterior and mural of an ethereal star lady known as Ursa Nightingale, this rock spot is an icon of the Spokane music scene. Having been shuttered for years, the venue was reopened in 2014 by former Sunny Day Real Estate bassist Dan Hoerner and his wife Dawson, and they've kept an impressive roster of artists (including Nirvana's Krist Novoselic and Chris Shiflett of the Foo Fighters) coming through the doors. 171 S. Washington St., Spokane • 863-8098

One of Sandpoint's most popular venues, the Hive mostly specializes in funk, R&B and jam bands, though they're certainly not against bringing in some rock, jazz or folk. Following a complete renovation in 2014, the place has become known for its annual Aftival, which continues the party after each night of August's Festival at Sandpoint. 201 N. First Ave., Sandpoint, Idaho • 208-457-2392

A frequent stop for major touring artists, this mid-size rock club originally opened as the Big Easy (some of its high-profile shows included Elvis Costello and the recently reunited Pixies) and was folded into the nationwide Knitting Factory franchise in 2008. Since then, everyone from Sonic Youth to Snoop Dogg has performed there. 919 W. Sprague Ave., Spokane • 244-3279

Formerly the Blue Spark, this bar sits on the corner of Howard and First and has proven itself to be one of the best spots for local bands to play. The spacious, well-stocked bar and kitchen would be enough of a draw, but the Observatory's stage, tucked away in a separate room, is a great place to take in a late night rock show. 15 S. Howard St., Spokane • 598-8933

Do your musical tastes lean toward thrash, metal and punk? Then this is unequivocally the spot for you. It's been the location of several other venues before, most notably the long defunct A-Club, but owner TC Chavez has established The Pin! (yes, the exclamation point is part of the name) as an all-ages haven for those who like their rock loud and fast. 412 W. Sprague Ave., Spokane • 624-0746