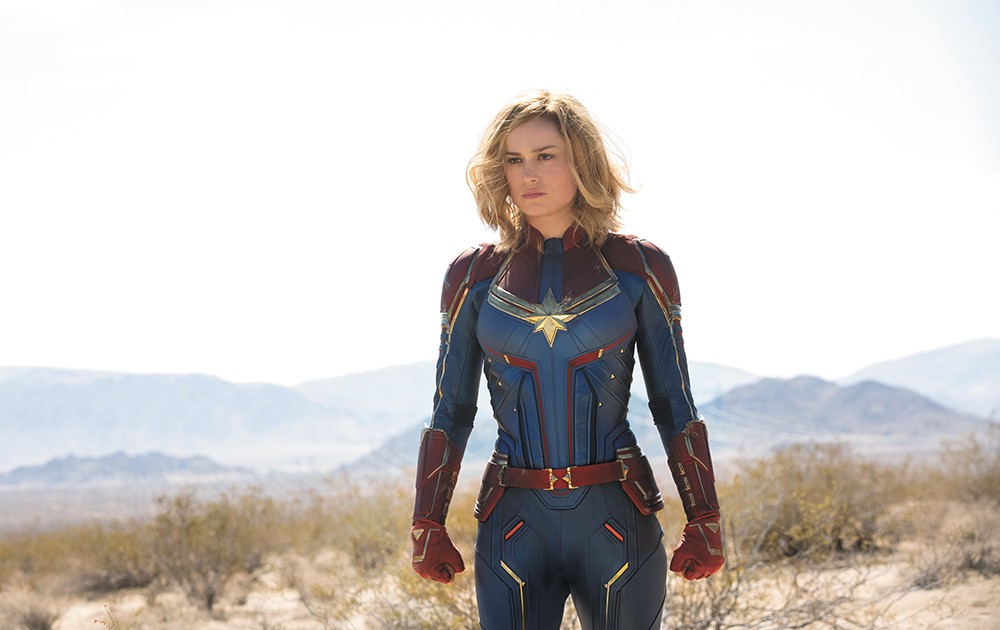 Finally, a female lead for Marvel.

Captain Marvel is the Marvel Cinematic Universe equivalent of a female-fronted alt-rock act from the '90s with crossover appeal. Think: No Doubt. It's a loud, aggressive blast, with a sense of playful wit and softened edges that appeal to the mainstream while still being casually feminist.

Technically a prequel to all the other MCU movies (it's set in 1995), Captain Marvel begins as a story of Vers (Brie Larson), a part of the elite Kree military unit Starforce. While she's super strong and capable of creating powerful energy blasts through her fists, she's troubled by unexplainable visions of Earth that she doesn't believe to be her own memories. After being captured on a Starforce mission by the Kree's enemy, the shapeshifting alien race known as the Skrull, she escapes and crash lands on Earth. There she runs into a familiar young(er) S.H.I.E.L.D. agent, Nick Fury (Samuel L. Jackson with CGI age reduction). The pair must then try to stop the Skrull from acquiring an Earthly developed lightspeed technology which could give them destructive power, all while Vers tries to piece together the holes in her memory.

Despite being mostly Earth-based, Captain Marvel feels the closest Marvel peer to Guardians of the Galaxy, in terms of being an intergalactic action movie based around strong character bonds. (There are even some shared characters between the two movies.) Captain Marvel can't avoid the burden of origin storytelling — something that the MCU's best recent films (Spider-Man: Homecoming and Thor: Ragnarok) were free of, allowing them to be truly playful romps — but it still finds levity between moments of my-past-is-so-complicated-and-unknown. The dynamic between Vers and Fury borders on buddy-cop territory in a positive way. And while their amusing banter draws some laughs, the comedic element gets upped even further with the addition of another character later in the film. If that last sentence seems incredibly vague, it should be noted that Captain Marvel might pack in more plot surprises than any Marvel film, which only adds to the excitement and engagement.

The action scenes deliver, whether an elevated train chase or space battle, but it's the acting that's actually Captain Marvel's strength. In the MCU realm of supersized personalities, Larson manages to never make her character feel over-the-top. Her Oscar-winning chops allow her to find the balance between being confused/unsure and confident/resilient, which is needed to make Captain Marvel resonate. Essentially doubling as Fury's origin story, the movie has more for Jackson to sink his teeth into. And when the always-stellar Ben Mendlesohn joins the fray (again, can't exactly say how), his charm becomes an instant highlight.

While it's not like the Oscars are going to come calling, each character has moments of subtle detail, the type that often get washed out in comic book movies. Some of the performance credit can probably be tied to the writing/directing team of Anna Boden and Ryan Fleck, who were previously best known for getting the most out of their actors in performance-driven indie dramas, including Half Nelson and Mississippi Grind.

Boden and Fleck also make the most out of the 1995 setting. There's plenty of obvious-but-still-amusing fun to be had with period piece jokes about old computers and defunct chain stores, but there's also great details for fans of pop culture nostalgia, like posters advertising PJ Harvey's album Rid of Me or Vers rocking a Nine Inch Nails T-shirt as part of her blending-in-with-Earthlings look. It aces the period piece aesthetic for the era. A special nod should be given to the music supervisor who wrangled together an all-star '90s soundtrack that's on-the-nose in a good way, with a fitting emphasis on female rockers like Garbage, Hole and, of course, No Doubt.

It's rather insane that it took the Marvel Cinematic Universe till movie 21 to get a female-led feature, but at least they made it a good one (even the can't-get-anything-right DC Extended Universe got that one right with Wonder Woman). But after the overlong wait, Captain Marvel delivers by focusing on its strengths. It may not be revolutionary, but there's nothing wrong with being a fun, nostalgic and empowering cosmic adventure. ♦

The original print version of this article was headlined "Oh Captain, My Captain"

Captain Marvel is not showing in any theaters in the area.