Recycle Man is making the world a little better for people and mascots alike, one bottle at a time 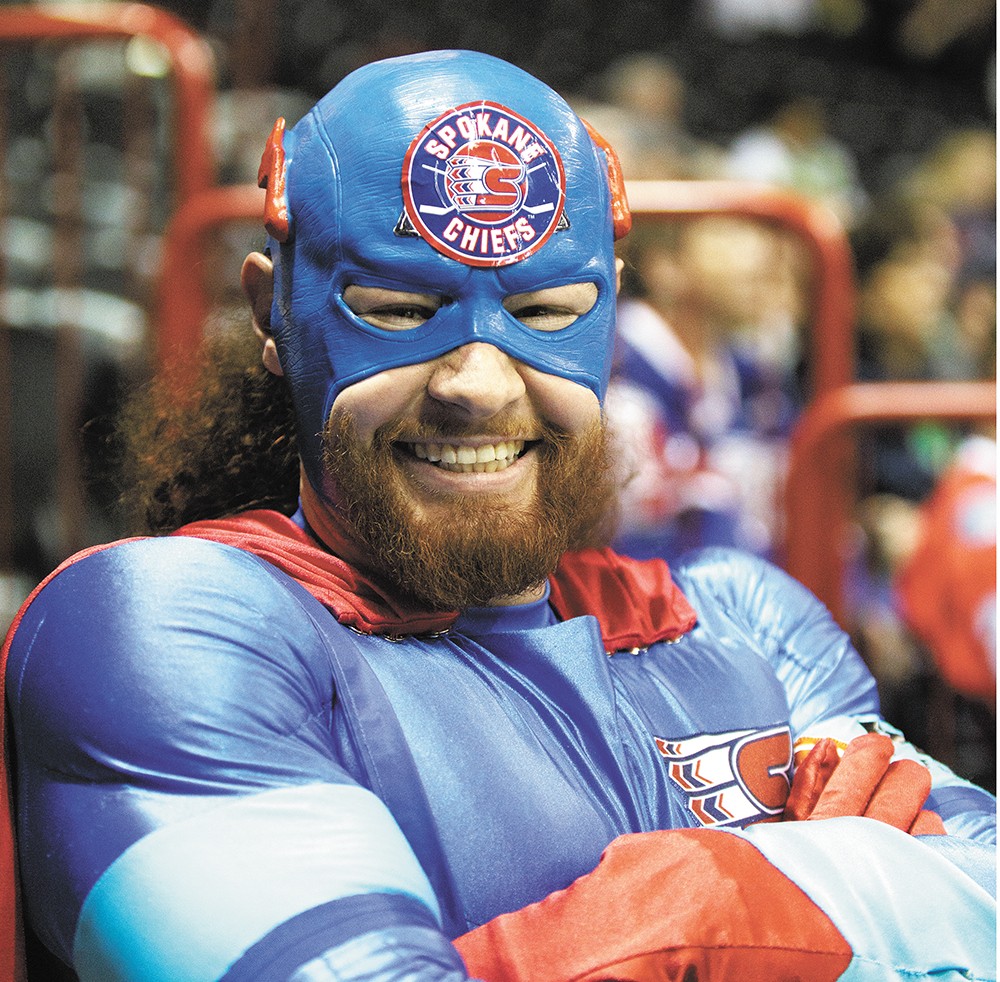 He stands on his hands in the middle of the ice rink.

Bright red boots pointed at the Spokane Arena rafters, matching cape falling over the back of his masked head. Somersaulting forward, Recycle Man lands lightly on his feet to the applause of Spokane Chiefs fans.

Since 2012, Recycle Man, who doesn't want his identity revealed, has regaled followers of Spokane's hockey team with his own brand of acrobatics (i.e., splits and snowball juggling), strongman poses, and a super-friendly grin that causes people to think twice about throwing a recyclable in the trash.

Last weekend, he was out on the ice sans skates during the first and second intermissions pumping up the crowds, dodging the Zamboni and assisting with various fan promotion games like shooting a turkey into a goal and padded-suit jousting. He says he's only slipped twice out there.

During the summer, he takes on the hot temperatures at Avista Stadium, as he's done since 2009. He and Otto Klein, senior vice president for the Spokane Indians, created Recycle Man to help promote eco-awareness at the ballpark and beyond. He recalls the first time he stepped out onto the field with the baseball team.

"It was awkward at first," Recycle Man says. "Because I'm a blue guy in tights. I didn't know what I was doing, and the crowd didn't know what to do. It probably took me two years to go, 'I'm OK being this weird.'"

Recycle Man isn't a mascot for a team

; he's a costumed entity with a cause. His mantra: "Saving the planet, one bottle of the time," is admirable but not a creed toward which most teams can devote a paid mascot. When EcoKat was introduced at Kansas State University in 2010, students and media outlets alike ostracized the green-thinking mascot so completely it was ditched after one season. Yet Recycle Man isn't the only eco-friendly mascot to catch on: the Seattle Mariners brought in Captain Plastic and Kid Compost in 2008 to promote their green intentions.

Even after a couple of years unsure of his place, Recycle Man has succeeded mostly because of the man in the tights and his full allegiance to the cause. Just one year after his inception, Avista Stadium recycled more than 17,000 pounds of material, and that number has only gone up.

Recycle Man's not in competition with other team mascots like Otto (Indians) or Boomer (Chiefs). He's there to complement them, but also do his own thing. During games he'll run up and down the stands, on the hunt for items to recycle, stowing them in his blue side satchel.

"Especially in the ballpark, where I've had more time, they're becoming self-sufficient there," Recycle Man says. "They know I'll come around and straighten them out if they don't recycle."

People do recognize Recycle Man out of costume;

his long, curly hair, goatee and toothy grin are a giveaway.

While hiding his identity from the public is essentially futile, he attempts anonymity nonetheless. His family, wife and friends know not to give the secret away. And they're incredibly supportive when he tells them things like, "I'm about to go hang out with a dinosaur, a Sasquatch and a superhero."

It all began seven years ago, after he took a job as the Red Robin mascot. He realized acting goofy while in costume made him happy.

"The more I got into mascoting, the more I realized that it was necessary for me," Recycle Man says.

Over the years, he's worked as Skitch the Sasquatch at Spokane Community College and Swoop the Eagle at Eastern Washington University. As Swoop, he even jumped out of a plane for a video played during the 2010 Dam Cup, an annual competition with Portland State University. To learn the craft, he attended a mascot boot camp in Delaware put on by Dave Raymond, the original Phillie Phanatic. He learned that to be an effective mascot, you must be spontaneous, athletic, aware of your surroundings and quick on your feet.

And that's worked out for him. He currently makes about 200 public appearances a year as four different mascots, but Recycle Man is his main persona and the only one he'll talk about. He's also run mascot training camps at SFCC and EWU. Out of the spotlight he works full-time and is finishing up his master's degree in teaching. "I'm definitely not bored," he says.

In order to fit into his Recycle Man costume, which is replaced every two years, he rock-climbs and kayaks and attempts to stay away from greasy foods. Inside the suit it's 15 degrees above room temperature, meaning the costume gets stuffed into his washer after each use.

"I'm here to promote good hygiene as well," he says with a laugh.

Recycle Man says he's interested in being a mascot for a major professional team someday, but for now he's content.

During the third period

, Recycle Man stands next to a blue recycling bin in the Arena hallway talking about the ups and downs of the job. On one hand, he's a role model for kids. On the other, there are hazards to watch out for.

"Being sprayed by beer is the worst," he admits. "Sometimes people don't realize their Bud Light isn't empty and it ends up all over me."

Throughout the conversation a parade of characters vie for Recycle Man's attention, including a birthday girl in a pink tiara and a tipsy mother who attempts to sneak up behind him. In all instances Recycle Man is gracious, willing to pose for photos and hand out his trading card.

The final buzzer sounds and the walkway floods with Chiefs fans. Recycle Man goes into superhero mode, thanking folks for throwing their beverage containers into the correct bin and high-fiving wide-eyed kids. Eventually he's swallowed up by the tide of people, his blue head just noticeable above the fray. ♦

Catch Recycle Man at the Spokane Chiefs' next home game, vs. Prince George at the Spokane Arena, Sat, Dec. 13, at 7:05 pm. It's also "Teddy Bear Toss" night, when fans throw teddy bears onto the ice for charity.

Polar Bears and Global Warming: Connecting the Dots to the Rest of Us @ Gonzaga University Hemmingson Center