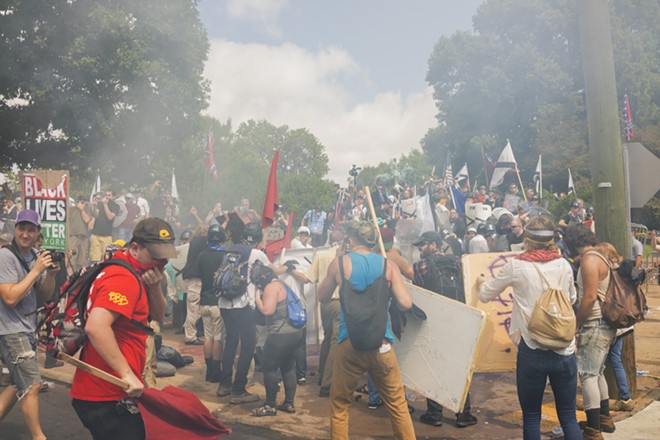 Matt Eich/The New York Times
Confrontations in the streets of Charlottesville, Va., where white nationalists faced counterprotestors at a planned protest, billed as a “Unite the Right” rally, Aug. 12, 2017. The demonstration, which both organizers and critics had said was the largest gathering of white nationalists in recent years, turned violent almost immediately; a car that plowed into a crowd of counterprotesters later left at least one person dead and at least 19 injured.
By SHERYL GAY STOLBERG and BRIAN M. ROSENTHAL
© 2017 New York Times News Service


CHARLOTTESVILLE, Va. — Violence erupted Saturday as hundreds of white nationalists had gathered here for a rally and clashed with counterprotesters, resulting in at least one death and prompting the governor to declare a state of emergency.


After the rally at a city park was dispersed, a car plowed into a crowd near the city’s downtown mall, killing at least one person and injuring at least 19 others, according to a spokeswoman for the University of Virginia Medical Center. Authorities did not immediately say whether the episode was related to the white nationalists’ demonstration, but several witnesses and video of the scene suggested that it might have been intentional.

Al Drago/The New York Times
“We condemn in the strongest possible terms this display of egregious violence on many sides,” said President Trump, adding that he had been in contact with Virginia officials.
Emergency medical personnel treated eight people, the Charlottesville Police Department said. It was not immediately clear how severely they had been hurt.

Witnesses said a crowd of counterdemonstrators, jubilant because the white nationalists had left, was moving up Fourth Street, near the mall, when a gray sports car came down the road and accelerated, mowing down several people and hurling at least two in the air.

“It was probably the scariest thing I’ve ever seen in my life,” said Robert Armengol, who was at the scene reporting for a podcast he hosts with students at the University of Virginia. “After that it was pandemonium. The car hit reverse and sped and everybody who was up the street in my direction started running.”

Saturday afternoon, after initially issuing a brief denunciation on Twitter, President Donald Trump, speaking at the start of a veterans’ event at his golf club in New Jersey, again addressed what he described as “the terrible events unfolding in Charlottesville, Virginia.”

In comments from Bedminster, New Jersey, President Donald Trump condemned the bloody protests. But he did not specifically criticize the white nationalist rally and its neo-Nazi slogans beyond blaming “hatred, bigotry and violence on many sides.”

“It’s been going on for a long time in our country, it’s not Donald Trump, it’s not Barack Obama,” Trump said, adding that he had been in contact with Virginia officials. After calling for the “swift restoration of law and order,” he offered a call for unity among Americans of “all races, creeds and colors.”

The demonstration, which both organizers and critics had said was the largest gathering of white nationalists in recent years, was organized to protest the planned removal of a statue of Confederate Gen. Robert E. Lee from a city park.

After the rally was dispersed, its organizer, Jason Kessler, who calls himself a “white advocate,” complained in an interview that his group had been “forced into a very chaotic situation.” He added, “The police were supposed to be there protecting us and they stood down.”