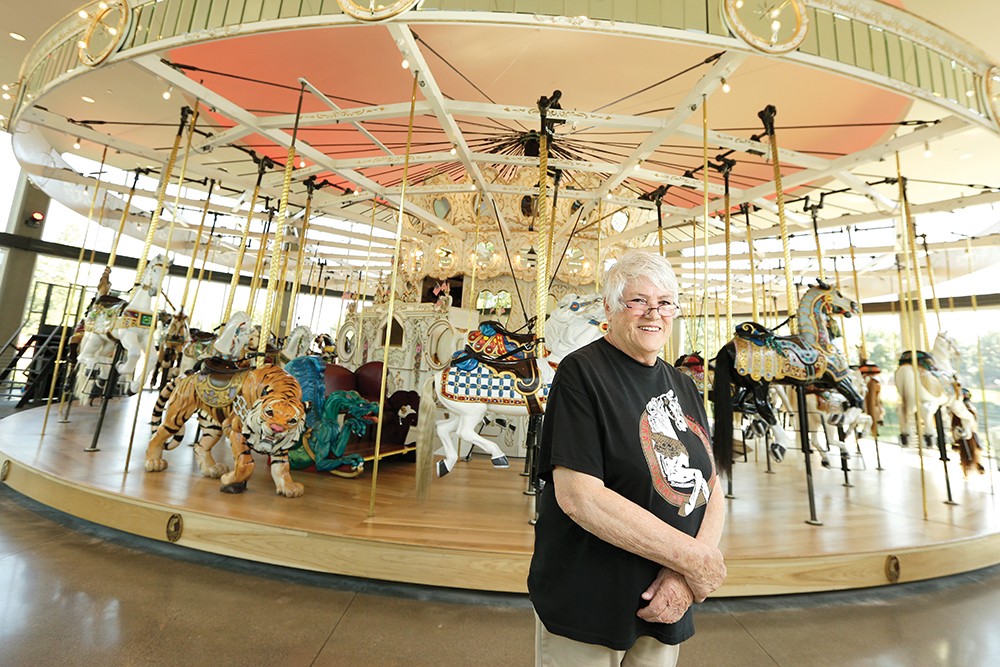 For the past 26 years, Bette Largent has treated the horses on the Looff Carrousel in Riverfront Park with the care and attention normally afforded flesh-and-blood animals.

Largent is essentially the Carrousel's caretaker: She makes sure its 54 horses (as well as its tiger, goat, giraffe and dragon-adorned chariot) are cleaned, that regular wear and tear is repaired, and that any cracks in the poplar wood are caught before they can do serious damage.

For an attraction that's more than a century old and has entertained millions of people since it was installed in 1909, Spokane's Looff is in remarkably pristine condition.

"If we take proper care, it will last many more generations," Largent says.

Largent was raised in southern Idaho, and she remembers being attracted to carousels at the county fair, despite her father's antipathy toward carnivals. Her mother, on the other hand, loved riding them.

"They had a band organ," Largent says, referring to the instrument that produces a carousel's lively musical accompaniment, "and I loved the music. I rode real horses, but this was interesting. It was just the magic of it, and I never lost that."

She still remembers the date when she first rode the Spokane Looff Carrousel with her husband, a Spokane native: May 17, 1980, the day before Mt. St. Helen's erupted.

"If we had come a day later, I wouldn't have been able to ride it," Largent says.

After working as an antiques restorer and freelancing as an artist, Largent got a job managing the gift shop attached to the old Looff Carrousel building, but she eventually turned her full attention to maintaining the Carrousel. She's since become something of a carousel encyclopedia: She served as board president of the National Carousel Association, has visited most of the country's working carousels and consulted many of them on general upkeep — including a recently renovated carousel in Sandpoint — and literally wrote the definitive book on carousel maintenance (a manual titled Paint the Ponies).

The Looff Carrousel has been an icon of downtown Spokane since it opened more than a century ago, back when it was located in West Spokane's Natatorium Park (or Nat Park, colloquially). The Carrousel's namesake, designer Charles Looff, made somewhere between 30 and 40 carousels during his lifetime, and Spokane's is one of only six still in operation.

As part of the $64 million Riverfront Park renovations, the Carrousel reopened this summer following a refurbishing process in which it was repainted and renovated to a state that approximates its original look. The intricately-carved upper crown of the Carrousel was also restored, a process that Largent says took four years, and the embossed designs on its outer edge, which had previously been painted over, have been enhanced with a gold tint.

The older Carrousel building has also been replaced with a round, high-ceilinged structure that's mostly glass and concrete. It's much brighter than the former enclosure with its dark knotty pine paneling. Largent says she's never seen the Carrousel so well-lit. The interior is climate controlled, which will prevent the wood from cracking and warping when temperatures fluctuate.

When it comes to the horses themselves, Largent says it's the saddles that receive the most wear, and many of them have now been reinforced. The stirrups have also been moved further down, so that adult riders' feet aren't always rubbing against the bellies of the horse and scratching the paint.

"The bodies all got repainted. I never changed any of the colors, just enhanced them," Largent says. "The wood is so old that if you get a tiny hole that sees the extra moisture, the wood swells and the paint pops."

All of that damage can be prevented, Largent says, but then there's what she refers to as "love wear." That's a bit more difficult to avoid.

"I'll sit and watch the kids while they get the ride going," Largent says. "They have to pet [the horses], they have to wrap their feet around their necks. Their little shoes hang at the right angle so that the buckles scratch the paint. That's love wear, and it's the cost of doing business."

Although it's impossible to pin down an exact number, Largent estimates that some 300,000 people ride the Carrousel on an annual basis. And now that it's got a new coat of paint, that figure could climb.

So what is it about the Carrousel that still attracts people of all ages, more than 100 years after it first opened?

"You have lights, you have mirrors, you have all this action going on. That appeal is always going to be there," Largent says. "And I love the art. I'm just amazed by the craftsmanship, especially Looff horses."

And even adults who think they're too cool to enjoy a ride: They eventually succumb to its magic, Largent says.

"It takes three revolutions, and they're smiling," she says. "By the fourth, usually, they're waving."

Most of the animals have names

Some of the equine nicknames include Oliver's Pride, named for a former owner of the Carrousel, and Sisco, a bucking bronco named for Kevin Costner's horse in the film Dances with Wolves. There's also Warrior, Penny Lane, Athena and Rocky.

No two Looff horses are the same

Looff reused body molds often, and the figures seen on the Spokane carrousel are typical of his style. But every design is unique to its horse, and you'll never see two horses that have been painted and colored in the same way.

Some of the figures predate the Carrousel itself

Billy Bob the Goat was added to the Carrousel in 2006, and was likely made sometime in the 1880s. Geri the giraffe, meanwhile, dates back to the mid-1890s and may have been personally carved by Looff. Sneaky the skulking tiger is an extremely rare figure, too, and the only one of its kind on an operational machine.

What's with that extra "r" in "Carrousel"?

Early 20th century spellings of the word vary from source to source, Largent says. In fact, there's an old letter Looff wrote in which he spells the word four different ways. The double R's could have been a deliberate flourish, a product of Looff's broken English, or merely a misinterpretation of how the word should actually be spelled. So when writers refer to Spokane's Carrousel, you'll see two r's; generic carousels have to settle for one r.