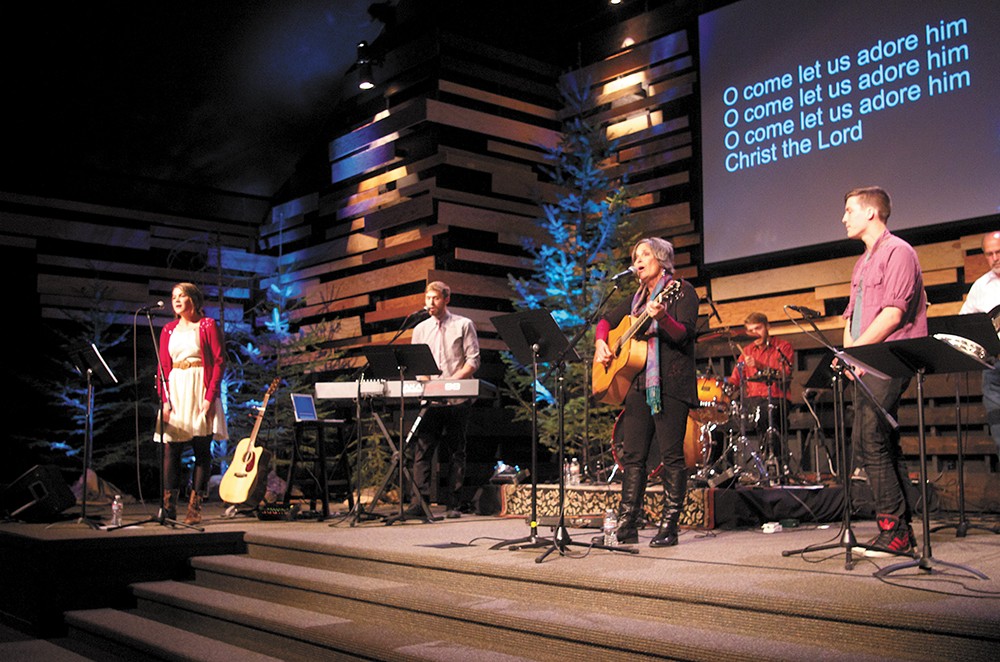 Brandon O'Neill won't be coming home for Christmas this year, but that's the way it goes if you're part of a Broadway show premiering in less than 10 weeks.

Brandon O'Neill in rehearsal for Aladdin.

O'Neill's role as a sidekick in Aladdin, the Disney musical adapted from the animated movie, is one he originated at the 5th Avenue Theatre in Seattle, and he's at home on the stage after a series of critically acclaimed lead roles. But Broadway is in some ways very far from where he got his start here in Spokane, where he grew up singing in church and with his family, and later leading the band Rough Congress.

"I always dreamed that my voice would pay the bills, but never imagined musical theater as a venue for that," he wrote from his dressing room in Toronto, where the cast is in the middle of three months of "pre-Broadway" rehearsals.

Music, in many forms, runs in the O'Neill blood. Brandon's father grew up singing, as did his father. His aunt, Annie O'Neill, is a singer who's performed at the House of Blues in Las Vegas. Another aunt, BethAnn Long, recorded three albums and still performs. Three of her sons, plus another cousin, are sharing a stage for a first time in years this weekend at the Bartlett.

Christmas caroling with the O'Neill family is a "four-part harmony affair," Brandon says, and he and his cousins share memories of sing-alongs and gatherings where their different styles had a common start.

"Simple opportunities to hear and be heard and encouragement to raise your voice were common in our family," he says. "This is how singers are born."

The way the story goes, it all started with Scott Joplin's "Maple Leaf Rag." Anne O'Neill bought the sheet music and taught herself to play piano, and her children grew up sitting beside her as she played ragtime piano in North Dakota during the Great Depression.

One of her sons, J. Pat O'Neill, sang in barbershop quartets, and with his wife Theresa brought up seven children singing harmonies in Spokane.

"Whenever we were in the car going on a trip, Dad was singing," says his son Shane, Brandon's father. "He's a whistler and a crooner and he sings all the time. It plants seeds into your mind and your soul about music — and then it's up to the individual to take it from there."

As kids, Shane and his twin brother Kevin sang on Starlit Stairway, the live talent show televised in Spokane every Saturday night for decades. They performed when the renowned barbershop quartet Buffalo Bills came to town in 1961.

"There's a recording — we sound like the Chipmunks because our voices hadn't changed," Kevin says.

Kevin says he's not taking credit, but he likes to tell about how he put a three-quarter-size guitar with a missing string into the arms of little BethAnn.

"Next thing you know she's playing John Denver and everything else," he says.

Now 87, the patriarch of the family is a steady supporter at Spokane's theaters and auditoriums, coffee shops and music venues — anywhere his children and grandchildren make music. He's proud of the family legacy, but deftly pushes the spotlight toward the newer generations.

"These guys are the up-and-comers," he says.

While Brandon O'Neill was in Seattle singing with the Seattle Symphony and earning leading roles, his younger cousins were forging their own styles. As teens, Patrick O'Neill and his cousins Curran and Riley Long earned a following and packed the Big Easy as the rock band Mylestone. They moved on, but didn't stop making music. Twins Curran and Riley, now 24, have been performing more than half their lives.

"It wasn't like our parents shoved us into classical music lessons or anything, we just had a basement full of fun, musical toys," Curran says.

Their older brother, singer-songwriter Kevin Long, has toured with Rocky Votolato and embarked on his own West Coast tour this past summer. Their cousin Patrick, now also based in Seattle, put out an album this year that gives credit to several O'Neills for backup vocals. It's been a long time since they shared a stage together, and their shared show this Friday night at the Bartlett is a reunion of sorts.

The youngest Long siblings, also twins, also are talented performers. The musical gene continued to the next generation of great-grandchildren — the family's youngest singer-songwriter is University High sophomore Jamison Sampson, who has recorded with Curran.

The whole family agrees it's about nurturing and encouragement, not competition, though Brandon jokes that it could get ugly if someone won a Grammy. "How do you thank a family as big as the O'Neills?" he says. "'He said Kevin's name, why didn't he say mine?'"

Success gets the headlines, but music has carried the family through hard times, too, as a symbol of what binds them.

The Cold Millions by Jess Walter @ The Hive