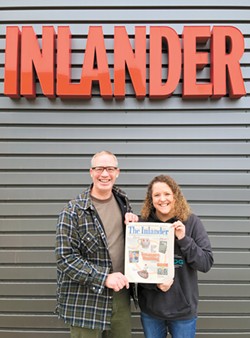 Samantha Wohlfeil photo
Scott and Susie Tschirgi met through the I Saw Yous, with a little hand from fate.

Before Facebook enabled people to find each other through mutual friends online, before Craigslist's missed connections reached peak popularity, there was another longshot method of desperately searching for that person whose smile made everyone else in the room fade away: the personal ad.

But we're getting ahead of ourselves. Let's go back a little.

It's March 2000, and Scott Tschirgi is shopping for a birthday card for his mom at the old Albertsons up on Regal Street (good job, Scott). He's a resident firefighter for Spokane County District 8, and he glances up to see a cute woman at the end of the row.

He doesn't know it yet, but that's Susie. The speech therapist is dressed in sweats and a baseball cap, out for her Sunday routine: throw on whatever clothes are easiest to find, grocery shop, then head home to clean, do laundry and get ready for the week.

The two make eyes and, she'll explain 19 years later, she's interested enough to pass down the aisle, trying to spy if he has a wedding ring on.

"He didn't," she says. "But then I thought, 'Well, he's probably card shopping for a girlfriend or wife anyway,' so I went on."

Scott keeps an eye out for her as he finishes shopping and spots her standing in the checkout line.

"I saw him coming towards me and I thought, 'Oh, he's going to get in line behind me! Just say something cute and witty,'" Susie says. "And then he took off down another aisle, and I'm like, 'Damn it!'"

"I guess I was shy and I chickened out," Scott explains.

But she decides to go look for him.

Little did she know, Scott also wanted to catch her eye. He tried to find her in the parking lot, just in time to see her hop in her little green Corolla.

"I was secretly, I don't want to say stalking her, but you know, before stalking was mainstream," Scott says with a laugh.

He figures he'll write an I Saw You.

"I read the Inlander for years and years, and everybody checks out the I Saw You ads 'cause everybody wants to have an I Saw You placed," he says.

In his March 2000 I Saw You, after describing both of them and their cars, he pleas, "I wish I would have had the guts to say hello. Give me a second chance?"

The fact Susie even saw that ad was a serious stroke of luck: She hadn't picked up a copy of the paper in maybe five years.

But while heading to Lewiston with a friend for a rodeo event, they stopped at a store, and Susie says she picked up an Inlander on a whim so she could read the personals to her friend.

Later that night, she read them through and thought, "Oh, Albertsons on Regal, I shop there. Then I start reading it and I'm like 'Hey! That's me! That's me!'"

The two connected via a voicemail box and later met up at the grocery store parking lot before heading to their first date.

Three years later, the Tschirgis were married. They now have a 14-year-old daughter named Sam, Susie is a stay-at-home mom and Scott is a Spokane Valley firefighter. ♦