Frantz is a beautifully mounted, black-and-white period piece that's occasionally hobbled by its own tricky structure 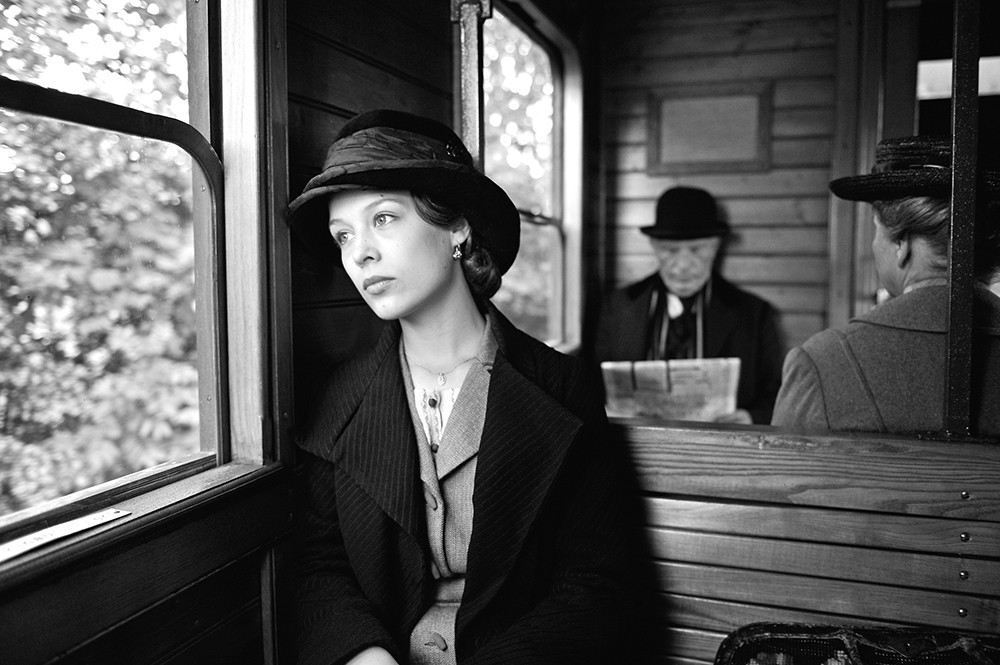 Frantz is a narrative puzzle with hints of Hitchcock.

François Ozon's Frantz is named for a dead man, a German soldier killed in France

during World War I, whose tombstone sits atop an empty grave in a modest cemetery in his hometown of Quedlinburg. That's where Anna (Paula Beer), the woman to whom the late Frantz Hoffmeister was engaged, sees a strange fellow weeping and dropping roses on her fiancé's grave.

He's a Frenchman named Adrien Rivoire (Pierre Niney), and when Anna approaches him, she discovers that he and Frantz were apparently close friends. They were soldiers for warring factions, Adrien explains, but they bonded over their mutual love of Manet and Chopin, and often went out drinking and dancing together. Adrien even taught Frantz how to play some rudimentary violin.

Anna now lives with Frantz's parents, and his father, the town doctor, initially refuses to speak to Adrien. "Every Frenchman is my son's murderer," he intones. But Dr. Hoffmeister (Ernst Stötzner) quickly warms to the soft-spoken interloper, who's soon a regular visitor in the home of his dead friend's parents. Frantz's mother (Marie Gruber) even suggests that Adrien and her son are so similar in temperament that they may as well be the same man. It's obvious, too, that Anna is taken with the cultured, handsome Adrien, who's sensitive and thoughtful and often recites poetry from memory.

And this story is a mystery, in a way, though it's not exactly in a hurry to answer the questions it raises. Under what circumstances did Adrien and Frantz meet? What drew them to one another, despite the antipathy that existed between their respective countries? And if they were such great pals, why did Frantz never mention Adrien in his letters to Anna? Is Adrien to be trusted at all?

But Frantz isn't one of Ozon's twisty Hitchcock riffs, even if Philippe Rombi's musical score sometimes seems to be channeling the work of composer Bernard Herrmann. The film is actually a remake of Broken Lullaby, a relatively obscure 1932 drama by the great German director Ernst Lubitsch, which starred Lionel Barrymore in the role of the dead soldier's father. Ozon has lifted all of the basic elements from the Lubitsch version (itself adapted from a play by Maurice Rostand), but he's inverted the structure so that the motivations of the Frenchman, which were always clear in the original film, remain fuzzy until halfway through the movie.

This is a novel idea, turning a simple chamber piece about the ruin of war into something of a narrative puzzle. But that very structure is what ultimately prevents Frantz from achieving the greatness it's grasping for: Because Ozon expends so much energy hiding things from us — and then conceiving of ways for the characters to hide things from one another — the complexity of Anna and Adrien's strange relationship isn't fully explored. This is a film about the danger of secrets, certainly, but it keeps so much hidden from the audience that the inherent emotional complexity of this story remains surface-level.

Frantz is still a beautifully made and often engrossing film, shot in lustrous black and white (with a handful of color interludes) by Ozon's regular cinematographer Pascal Marti. Perhaps, though, Ozon would have been wise to stick to Lubitsch's dramatic blueprint: Here we have two fascinating, complicated characters linked together by a series of bizarre circumstances, and yet we can't help feeling that they're simply being yanked around by the machinations of a crafty screenplay. ♦

Frantz is not showing in any theaters in the area.