A year into the Spokane's new panhandling ordinance, guilty verdicts are rare 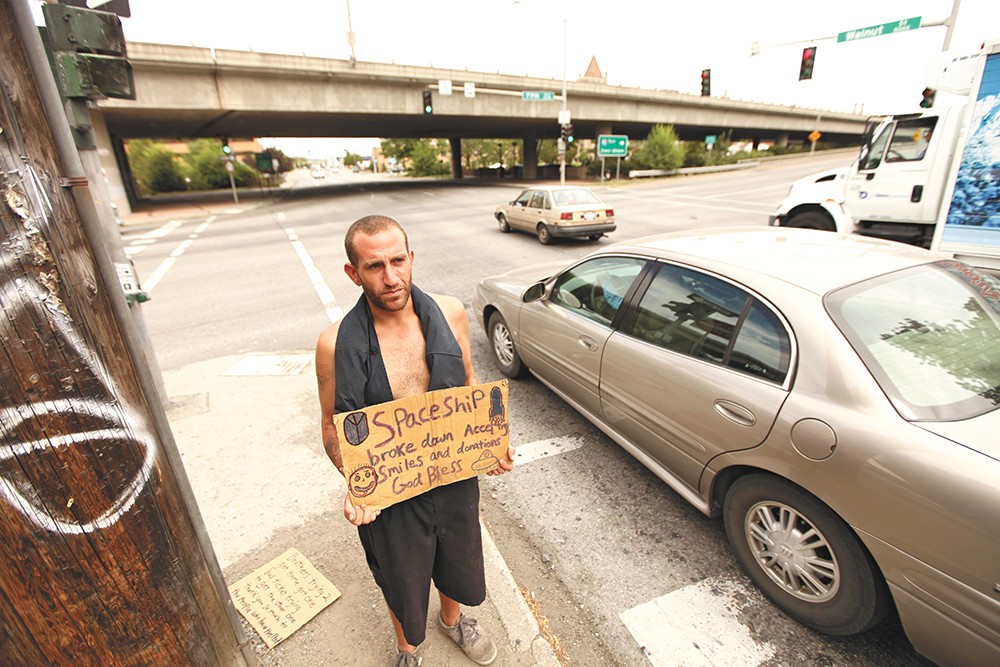 Young Kwak
A panhandler in downtown Spokane in summer 2012.

On a cold February Saturday, just after 5 pm, a Spokane police officer gazes across a downtown corner to see a panhandler step into the street and take something from the driver's side window of a small silver car. Thanks to an ordinance passed late last summer, the man has now committed a misdemeanor, and the officer confronts him.

"I clearly observed the male enter the roadway by crossing the vertical plane of the edge of the roadway with his hand/arm. I clearly observed the male solicit from the occupant of the described vehicle," the officer later writes in his report. "He admitted to reaching into traffic and taking a $1 dollar bill from the driver of the vehicle I observed."

But when the case reaches the prosecutor's office, it's dismissed. A box is checked next to "Lack of evidence." In the year between last October, when the law took effect, and this month, officers issued 154 citations for pedestrian and vehicular interference; more than a third of them have been dismissed.

Of citations written in the past year, just 17 — or 11 percent — have resulted in guilty convictions. Many remain open because the person cited hasn't shown up in court, and 58 were dismissed for things like lack of evidence, lack of probable cause or the catch-all term "interests of justice." (Pedestrian and vehicle interference citations are grouped together in municipal court records, meaning that while many of these citations were given to panhandlers for stepping into the street, some are given to people for illegally crossing the street or interfering with pedestrian traffic on sidewalks.)

The ordinance, which applies only to the downtown core, and its enforcement since have come in response to downtown concerns about panhandlers. Police have acknowledged it can be difficult to catch someone in the act of panhandling if they know officers are nearby, and at least one effort to do so has backfired. On May 22, an officer in an unmarked vehicle patrolled freeway entrances and exits in a short sting aimed at citing panhandlers. In some cases that day, according to SPD spokeswoman Monique Cotton, the officer showed money from his window. He wrote five tickets between 5 pm and 6:09 pm at intersections like Third and Division and Fifth and Walnut that day, according to court documents, but each was dismissed for lack of evidence, lack of probable cause or "prosecutorial discretion." Among the prosecutors' concerns was that the process of ticketing could have been interpreted as entrapment, tricking someone into committing a crime in order to prosecute them for that crime.

"It's not intentional. It's a group of officers trying to address a problem that is very prevalent here in Spokane that people find to be unacceptable," says Judi Carl, commander of the downtown substation, which was created in June. "Officers are trying to find a way to combat that issue because the law is continually broken by individuals who have no respect for the law. In doing so, perhaps it was not as clear what was acceptable and what is not."

Carl says confusion about how to interpret the law has since been clarified, a similar operation hasn't been done again, and the department is in "close communications" with the prosecutor's office to prevent similar concerns in the future. Cotton says the officer involved has since received extra training.

"It's a non-issue for us, to tell you the truth," Carl says.

City prosecutor Ellen O'Hara acknowledged through city spokesman Brian Coddington that "the entrapment issue arose" in cases "on or about May 22." In an email to the Inlander, O'Hara says it's "not unusual" for some cases to be dismissed, and that "It is the duty of every prosecutor to seek justice, not to simply get as many convictions as possible." However, O'Hara refused to answer further questions about entrapment concerns or the vehicle interference ordinance in general.

Indeed, the citations dropped in part because of entrapment concerns are few, but some say concerns about the ordinance — including the low conviction rate — have bigger repercussions.

"It speaks to some of our concerns with things like the proposed [extension of the city's] sit and lie ordinance," says Rick Eichstaedt, executive director of the Center for Justice. "What sort of tactics are going to be used to make enforcement of some of these laws easier?"

In recent months, as city lawmakers have looked to curb issues including panhandling in downtown, passing ordinances about bus plaza conduct and skateboarding on sidewalks, constitutional and financial tensions has come up. A potential extension to the city's sit-lie law would outlaw sitting or lying on downtown sidewalks except between the hours of 3 am and 6 am. The ordinance has since been postponed, but some councilmembers still hope to see it passed.

Breean Beggs, a local civil rights attorney who's been outspoken in favor of police reform and a set of criminal justice reforms known as "Smart Justice," says the question is one of dollars and cents.

"We don't want to see these types of crimes processed through the criminal justice system. It's very expensive. You have to give [the defendant] a public defender, you have to have a judge and a jury. You have to pay for probation or you put them in jail. You're spending thousands of dollars on a problem panhandler," Beggs says. "One reason I would imagine they're dismissing so many is [they] don't want to spend the resources to actually follow the law."

When Councilman Mike Allen, who sponsored the vehicle interference ordinance, heard about the number of dismissals earlier this year, he convened a meeting of police, municipal court judges and social service providers looking for answers. Today, he refuses to discuss the details of the meeting, but in an August meeting of the council's public safety committee, he said the judges expressed concerns about who was being targeted by the law.

"In our conversation with the judges," Allen told the committee, "one of the things they shared is they want to make sure that we're not just targeting somebody who may need help, along the lines of can we show that we're also trying to get them into our human services system?"

"She was very passionate about making sure we're not making it so cumbersome for an individual who doesn't have access to a car, or maybe has mental health challenges, or maybe has addiction issues, or is maybe living on the street, and you're expecting them to show up for a court date on the third Wednesday of next month," Richard says.

Logan declined to talk with the Inlander about the vehicle interference ordinance or potential entrapment, but said in an email, "The Court applies the law, regardless of concerns or no concerns."

Allen says he has no second thoughts about the vehicle interference ordinance, calling it a "great tool." With fewer convictions than he'd hoped for, Allen says he's looking to a different approach to curb panhandling: The council will kick in $7,000 toward a $25,000 downtown PR campaign aimed at discouraging people from giving money to panhandlers. ♦