Catcher on the Cracks

Is the alternative Dishman Hills High School saving at-risk students, or leading them to drop out?

Kristen Black
It isn't ideal for students to only attend Dishman Hills High School two or four days a week, Principal Julie Poage says, but for students with children or full-time jobs, it may be the only schedule that works.

to offer a broad variety of educational options. But at an October school board meeting, she named one option she wanted Spokane to avoid.

"We need to continue to counsel students: 'That's not a good option for you,'" Redinger says.

Indeed, Dishman Hills' results on paper, from the percent of students who pass standardized tests to the percent who go on to college, appear dismal. Even when compared with the major alternative schools in other local districts — On Track Academy in Spokane, MEAD Alternative in Mead, Mica Peak in Central Valley and Three Springs in Cheney — Dishman's four- and five-year graduation rates have been dead last for the past three years.

West Valley administrators, however, argue that Dishman Hills takes the types of students other schools won't and helps them succeed where other schools can't. The central question: Is Dishman catching enough students before they fall through the cracks, or does its part-time model let too many slip through its fingertips?

Waite's subterfuge was discovered, and he was hit with a long-term suspension. He ended the year with a whopping zero credits. After another bad experience at Cheney's alternative school, Three Springs, he looked outside the district.

Today, he's a senior at Dishman Hills, in a small Spokane Valley building across the street from the abandoned University Mall. Here, there are no sports programs, no cheerleaders, none of the thousand-student chaos that can terrify a kid who doesn't fit in. Here, about 70 percent of students only attend two days a week.

The classrooms, where students pluck electric guitars and peer through microscopes to study sickle cells, are tiny. So are the class sizes. Teachers can give students like Waite personal tutoring.

And the students, he says, are just as eager to help as the teachers. "We're all just a big family, basically," he says. "We all look out for each other."

Some students here were bullied, or live in poverty, or have full-time jobs, or have to take care of their own children. Some don't have parents. Some are homeless.

Waite knows some students, the sort who don't care to show up, will probably drop out. But a lot of them, he says, want to succeed.

"They really want to get their life together," he says. "They know that the only place they can do it is here. No other school will put in the effort."

Half the challenge is catching up: Students hammer away at computers, making up credits online — including physical fitness classes. Some alternative schools, like On Track Academy, require students to come in having already passed standardized tests; Dishman has no such requirement.

Today, most students are sequestered away in classrooms, retaking those tests. Those who fail to pass take "collection of evidence" classes, compiling big portfolios as an alternative to the standardized tests.

In Waite's case, it's been a wild success. He's set to graduate on time, and is taking Running Start classes for college credit. But he's an exception. Less than a fourth of Dishman Hills' students in the class of 2014 graduated on time. Even if you give them five years, six out of every 10 Dishman students, on average, still fail to graduate. On average, only about a fourth of graduates go on to a two- or four-year college.

West Valley takes a different view. "The way we measure it, every kid that graduates there is a kid who wasn't going to graduate otherwise," says West Valley Superintendent Gene Sementi.

Dishman Hills graduated 532 students from 2009 to 2014. "We are one of the very last places in the county that I'm aware of who will take students who have multiple years of failure and have a credit deficit," says Dishman Hills Principal Julie Poage. "They can come here and they can be accepted here."

Yes, close to half of Dishman's graduates didn't graduate on time. Sixty-three of those students took six years to graduate; 40 took seven years. But graduation is still graduation.

"Those kids are welcomed," Poage says. "They're not stigmatized and they're not scolded." 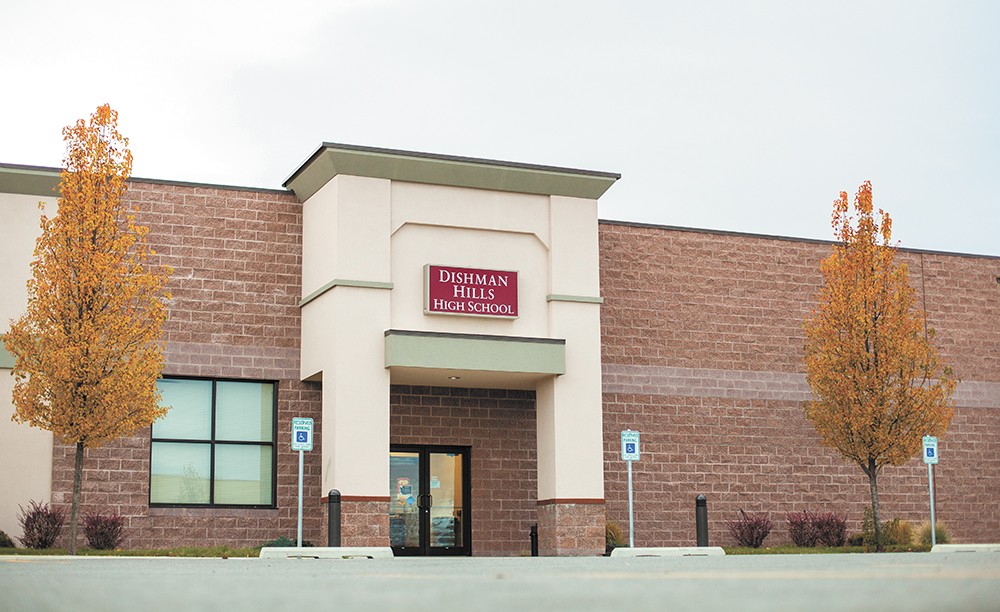 Kristen Black
Dishman Hills is the region's oldest alternative high school, but its structure has changed significantly in recent years.

In fact, the results used to be far worse at Dishman Hills. The nadir came a decade ago, when only 4 percent of the 2004 class graduated.

Back then, Dishman was called "Contract-Based Education Alternative Programs." The CBE model was even more radical: Students would only come into school one or two hours a week. Teachers would hand out big, thick packets, send them off, and hope, often futilely, that the kids would return the next week with the packets filled out.

When Cleve Penberthy became principal of CBE in the fall of 2005, he knew the school had to change. With credit requirements increasing and standardized-test graduation requirements looming, the "contract-based" model was failing.

"We've got to do a hell of a lot better. The kids that need the most are getting least," Penberthy recalls thinking at the time. "We need more face time and more relationship time."

He upped attendance requirements, requiring students to attend either two or four days a week, and he moved the school a little closer to something traditional.

"We ended up creating advisory groups and doing school-wide projects and having dances to try to put the social life into this thing," Penberthy says.

When Poage took the reins in 2011, she pushed teachers and students further away from the "contract-based" packets model. She mandated that to be a full-time student, kids had to take five classes. She created a class targeted to help new students and brought in an outside consultant to improve instruction. The results are encouraging.

"Kids are going to class more," Poage says. "Teachers are more rigorous in what they're teaching."

In 2013, Contract-Based Education changed its name to Dishman Hills. It wasn't just a matter of branding: Air Force and Army recruiters had considered CBE to be a "tier II" school — making military admission more difficult for its graduates.

The Army and Air Force still considers Dishman tier II, but Poage says the more conventional name seemed to have to have solved the admission hurdle.

Still, the way alternative-school graduates are treated — as if they'd received a lesser education — continues to grate on Poage and Penberthy.

"Every goddamn kid who graduated from my school had to pass the exact same things that a valedictorian at Lewis and Clark had to do," Penberthy says.

The Perils of Part-time

Dishman's reputation as an easier school, however, remains.

"The teachers are going to be more lenient," Waite says he had heard from friends before transferring to Dishman. "You'll be able to do basically whatever you want in class. ... It was chill."

Indeed, when he first started at Dishman, attending only two days a week, it did feel easy. Too easy.

"I really felt like I wasn't doing anything," Waite says. "Most of the time you get your work done in class. You're just sitting at home like, 'What to do?' Like, you know, what's the point?"

Four-day weekends every week left him feeling bored, disconnected and apathetic. He says he understands why students in that situation would be tempted to drop out.

This is the catch-22: For students burned by traditional high schools, the prospect of spending less time in school may be appealing. But succeeding with a part-time structure takes a lot more motivation, which almost by definition, those students didn't have.

By contrast, last year Waite attended school four days a week instead of two. That meant double the work, but also double the number of credits. He felt more engaged. The work wasn't easy, he says, but his teachers did a better job of helping him understand.

At Dishman, the part-time model presents a massive challenge for teachers: They have to teach the same amount of material as other schools, but with only a fraction of the class time, to students who struggle far more. Dishman teachers have learned to slice off whatever isn't necessary, Poage says.

On one point, Poage agrees with Dishman's critics: While the part-time model can work well for students with jobs or kids, it isn't ideal. "If I had my preference they would go four or five days a week," Poage says. "But we're in a situation, since I've been here, that I realistically can't get out of."

More days learning would mean hiring more teachers to keep class sizes low. And alternative schools like Dishman, Poage says, actually get a little less per student than traditional schools. Even if Dishman's building could handle students attending five days a week, the district couldn't afford to teach them.

Since January, Rogers High School Principal Lori Wyborney, in the Spokane school district, has been trying to discourage a struggling Rogers student from transferring to Dishman Hills.

"His girlfriend goes to Dishman Hills, and of course he wants to go there," Wyborney says.

For students like these, she stresses the importance of attending college, finds teachers they connect with and throws extra resources their way.

"For me, it's like, how do you get a kid to on-time graduation if they're only going to a school two days a week or four days a week?" Wyborney says. "They'll be in school longer, and these are typically kids who don't even like school."

Despite these efforts, 39 students transferred from Rogers to Dishman Hills last year.

Poage, frustrated with Redinger's critique of Dishman, speculates that Spokane Public Schools is "discarding students" to make their scores look better. Wyborney is offended by the suggestion, fervently denying that Rogers' graduation rate improvements came from throwing kids out. Ultimately, there are a higher percentage of West Valley students attending Dishman Hills than any other district, including Spokane.

There are, however, some occasions where Spokane Public Schools does recommend that a student attend Dishman. "When I've done it, I've said this is a great short-term option," says Dave Crump, director of student services. "I want them to come back."

But Spokane Public Schools struggles to figure out what happens when their students leave for schools like Dishman. It's another crack in the system: As students ping-pong from district to district in different alternative schools, they're hard to track and easy to lose.

"I don't want our district to lose our kids," Wyborney says. "[We do] everything we can possibly and legally get away with so our kids will stay with us." ♦