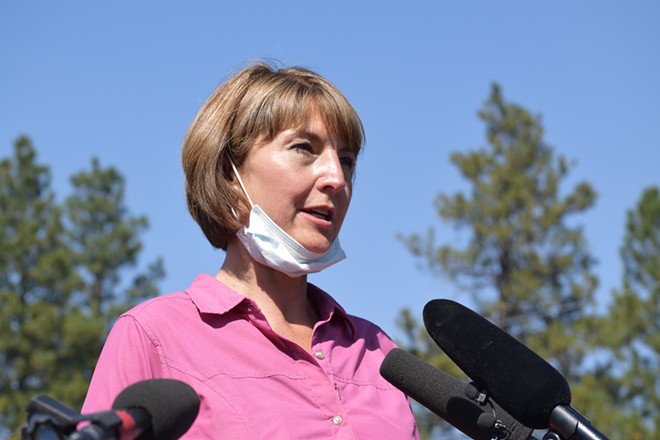 Wilson Criscione photo
Time to take off the gloves when it comes to challenging U.S. Rep. Cathy McMorris Rodgers.

She signed it. Cathy McMorris-Rodgers, our Fifth District congressional representative, signed on to an amicus brief in support of a Texas lawsuit designed to overturn the presidential election.

Her justification: The American people wanted the Supreme Court to answer any remaining questions about the 2020 election.

To be polite, balderdash.

Her shameless decision to join 125 other Republican House members had nothing to do with the will of the American people or the integrity of the presidential election. It had everything to do with keeping the denialist Republican base in her corner for the 2022 election.

There was not a legal scholar in the country who expected the Texas suit to gain any traction with the Supreme Court. Sure enough, late Friday the court tossed the suit on the basis that that state had no standing to challenge properly run elections in four battleground states won by the Biden/Harris ticket. The legal decision required a single paragraph of explanation.

McMorris-Rodgers certainly knew that would be the outcome. If she did not, then she is not competent and so would not deserve re-election.  As she most certainly did know but signed on anyway, her cynicism alone should disqualify her.

This is not a simple red/blue issue. This is existential.

The Texas effort, mounted by a state attorney general under federal indictment for securities fraud and facing additional federal corruption charges, was designed to further undermine confidence in the electoral system, to further de-legitimize the incoming Biden administration, and to further President Trump’s post-election political plans (and his financial well-being).

In his efforts to overturn the election result, Trump and his third-rate legal team have failed to produce evidence of voter fraud in court case after court case, more than 50 to date. The Friday Supreme Court decision likely puts an end to further legal action.

The president’s strategy now centers on Congress where he hopes Republicans can effectively replace Biden/Harris electors selected by their state’s voters with pro-Trump electors who will keep him in office. It is likely this strategy will fail, meaning his next steps will be more desperate and likely more dangerous.

Whatever outrageous Trump plans follow, expect McMorris-Rodgers to sign on. A congresswoman of known intelligence, she has nevertheless forsworn fidelity to the Constitution to secure her own political future.

Given Fifth District history, she will likely succeed. But district Democrats should start working now to identify the most formidable candidate available to take her on in 2022.

And take the gloves off this time. A member of Congress who would deny the right of voters to determine an election’s outcome should not get a pass when her time comes.