Celebrities have been known to slap their name or likeness on almost anything to make an extra buck. Why should recreational marijuana be any different?

As legal cannabis becomes more commonplace across the country, celebrities are trotting out all manner of products to cash in, including specific strains that have the stamp of approval from said celebs, as well as the tools of the getting-high trade.

Actually sampling all the star-endorsed pot products would take a lot of money, travel and recovery time, so we put our thinking caps on to imagine what a celeb's product might be like, based on the star on the label.

WILLIE'S RESERVE
Willie is arguably the most famous stoner on the planet — all due respect to Snoop Dogg. At the very least, the country legend is the oldest famous toker. And considering how long Willie's been hitting the green and how he's always been able to put on a great show, we imagine his brand of leaf and edibles keeps a long-running, pleasant buzz, but not one that knocks you off your feet.

SNOOP DOGG
LEAFS BY SNOOP
When a guy smokes as much as Snoop (and raps about it, talks about it, makes videos about it, etc.), you expect the stuff to pack a punch. Looking at the wild swings Snoop's made in his career, including stints as a violent gangster rapper, a cuddly youth football coach, a part-time Rastafarian and TV co-host with Martha Stewart, I'm going to guess Leafs By Snoop's strains are unpredictably potent.

MARTHA STEWART CBD
Sure, Martha's image is that of the incredibly proper and classy maven of decoration, dining and etiquette, but she also co-hosts Martha and Snoop's Potluck Dinner Party, so she's learned a trick or two from Snoop Dogg. Maybe just from inhaling his secondary smoke. Stewart teamed with Canadian cannabis company Canopy to develop a line of branded CBD products, including some for pets. Get ready to soothe those aches and pains and probably get into some crafting.

TOMMY CHONG
TOMMY CHONG'S CANNABIS
As half of the comedy team Cheech & Chong, Tommy Chong pioneered pot humor in the '70s and '80s. Looking back on movies like Up In Smoke and Nice Dreams, there's no denying his comic chops, nor the juvenile nature of the jokes. Chong's namesake weed will likely have you giggling at the dumbest things imaginable for hours on end. That's not necessarily a bad thing.

BELUSHI'S FARM
Playing roles big and boisterous is the calling card of Jim Belushi, as it was for his older comedian brother, John. And even if you like to partake in order to mellow out and chill, I'm guessing Belushi's Oregon-only products will give you a serious case of the munchies.

ICE CUBE
FRYDAY KUSH
The gangster-rap legend turned movie star is no dummy; tying the name of his first cannabis product to his modern stoner classic Friday is just savvy. Washingtonians will have to wait a bit before it arrives here, but when Fryday Kush does, expect it to start out aggressive and then mellow out nicely, just like its creator.

BRENDAN HILL OF BLUES TRAVELER
PAPER & LEAF
Hill set up shop for his weed company on Bainbridge Island — not a bad transition from the hard touring life of a musician. If I had to guess the powers of his Paper & Leaf products based on Blues Traveler's music, I'd guess the high goes on way too long, and inspires a few too many harmonica solos. 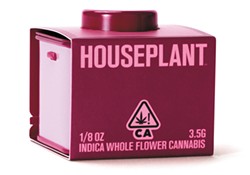 HOUSEPLANT
You'll have to travel to California or our neighbor Canada to sample Seth Rogen's company, but I think we can trust the jovial, weed-centric actor to know his way around a quality product. A puff or two of the Houseplant probably inspires some creativity. Have you seen the homemade pottery Rogen's churned out during the pandemic?

KEVIN SMITH & JASON MEWES
FAMOUS BRANDZ
If you don't recognize them by name, Smith and Mewes are better known as Jay and Silent Bob, the long-running stoner slackers from director Smith's movies like Clerks, Mallrats and Chasing Amy. Their Famous Brandz isn't a cannabis company, but rather makes the tools you need like bongs, pipes and the like. And if they're anything like the Jay and Silent Bob movies, they're probably great at first, and become unbelievably terrible the longer you keep them around.

FORBIDDEN FLOWERS
Thorne has turned a career launched on the Disney Channel into a bizarre mix of trashy horror movies, questionable music releases, profitable OnlyFans appearances and now Forbidden Flowers, her own cannabis line. They claim the weed is "sexy, cheeky and an embodiment of her free-spirited nature." I'm guessing if I smoked some, I'd spend most of the aftermath still wondering who the hell Bella Thorne is. ♦

The original print version of this article was headlined "Star Search"