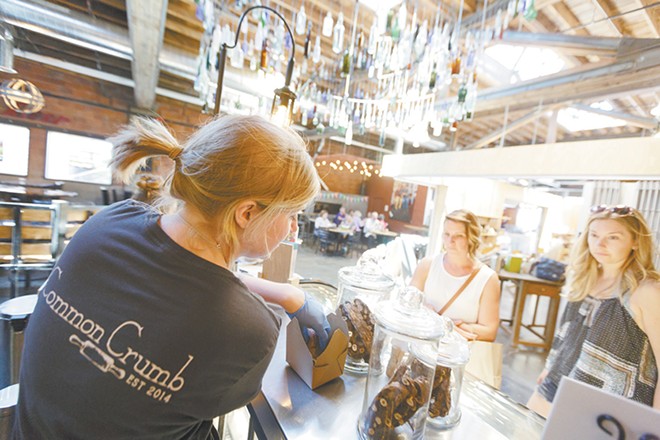 Young Kwak
Common Crumb is changing its format and name.

The scratch bakery inside downtown Spokane's Saranac Commons is closing temporarily, but will reopen later this month with a new name and a new menu. Owners Jeremy and Kate Hansen are rebranding the bakery as 509Cooks and plan to use the space as a teaching kitchen for aspiring local cooks and bakers. The name is a direct connection to chef Jeremy Hansen's 509Cooks nonprofit, which he founded last year after traveling to Puerto Rico to help feed residents displaced by Hurricane Maria. 509Cooks is what he calls a "culinary first responder," with the mission of sending cooks to support people affected by natural disasters in the Inland Northwest and beyond.

Hansen tells us some of the bakery's offerings will change, but it will continue to bake bread for retail sale and for the Hansens' other Spokane restaurants, including Santé and Inland Pacific Kitchen. Pastry and desserts at the bakery will gradually change, he says, adding that the bakery is also ending its wholesale offerings of those items. Customers can expect to eventually see more grab-and-go sandwiches, desserts, handmade chocolate, cheese, preserves and dry-aged charcuterie.

"We are excited to have 509Cooks take on more of a retail presence," Hansen says. (CHEY SCOTT)

Chef Adam Hegsted and other local chefs are teaming up to fight food insecurity at the upcoming Feed the Children Spokane event on Tuesday, Nov. 13. All proceeds will go toward a community feeding event, for which Hegsted and the international nonprofit Feed the Children plan to donate $100,000 worth of food and other nutritional items to support struggling families.

Tickets to the event, held at the Montvale Event Center in downtown Spokane, are $125 and can be purchased at feedthechildren.org/spokane. Table sponsorships are also available.

After its short hiatus this summer, the Observatory is back in full swing featuring new food and drinks, the same rocking music scene and some small upgraded details that add to the bar's ambiance.

Take a seat at one of the window booths, where brightly colored spherical moon lamps now nod to the stellar theme, and try a cocktail from a list of drinks named for local bands. Bourbon drinkers might like the Fat Lady ($11). Made over a whiskey cube with Hudson Baby Bourbon and amaretto, it's heavy on the lemon juice, giving it a tart start that gets sweeter as you make your way toward amaretto-soaked cherries at the bottom.

The new food menu was designed by former Ruins cook Joseph O'Neal, now in charge of the Observatory kitchen. It features new starters, including cheese puffs and sliders, a selection of steamed buns and a variety of rice bowls offering diverse flavors, from yellow curry to tea-brined salmon. We tried the chipotle chicken bowl ($9), which is topped with gorgonzola, toasted pepitas and a nightshade salsa that was made of tomatoes, caraway, onion, bell peppers, salt and pepper. The spicy kick of heat in the chipotle was barely offset by the gorgonzola, so the bright fresh salsa made all the difference in balance. Mix it all in for the best flavor combination. (SAMANTHA WOHLFEIL) ♦