Check out the new participants in Inlander Restaurant Week 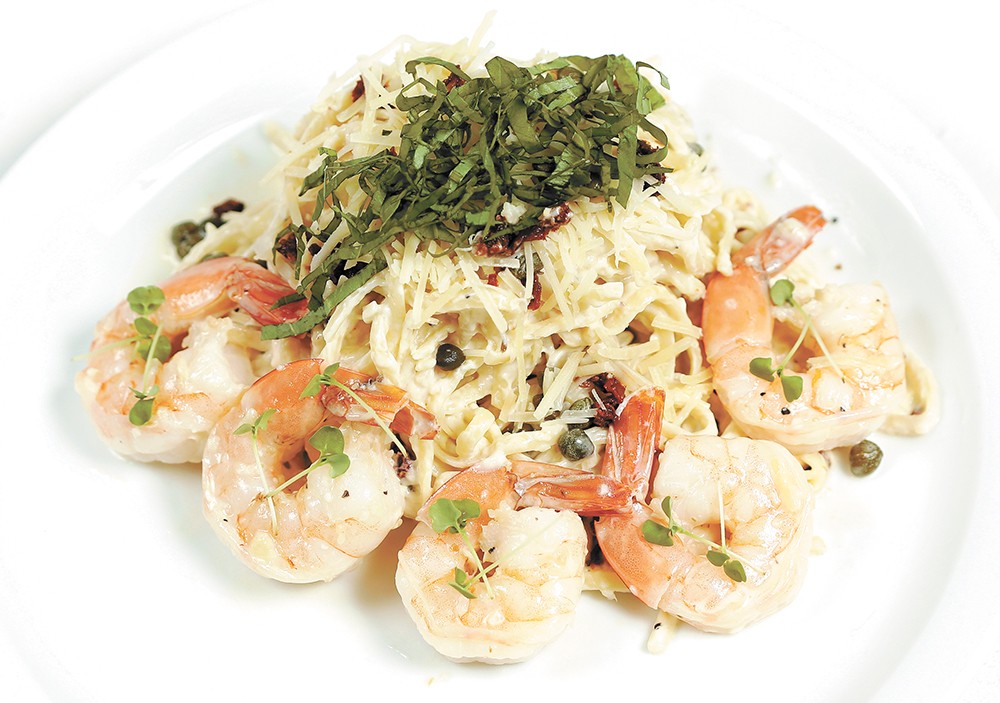 to grow, in breadth and depth. In addition to offering a broader range of places — not just fancy and not just pubs — it's also brought in newcomers to this popular event, which organizers continue to monitor and adjust so diners and dining facilities both benefit. Check out the full list of Restaurant Week newbies; we've highlighted a few of them here.

You won't need to wait until Oktoberfest for an excuse to try Das Stein Haus' German fare, which they've been serving for several decades. One of several newcomers to Restaurant Week, their inclusion is a perfect example of how the Inlander's foodie-focused event can work well for even seasoned restaurants like Das Stein Haus. Mach schnell (make haste) for happy hour, 4-7 daily, and try one of their many German biers (beers), then dive into their Deutch dishes like an bratwurst or German pretzel for an appetizer, followed by classics such as Rouladen: thinly sliced beef stuffed and rolled with bacon bits, red onion, pickle and German mustard cooked beyond fork tender. Dessert? Why apfel strudel or Black Forest cake, of course.

The continued expansion into Idaho's panhandle and a willingness to work with restaurant owners to improve the event is what drew Collective Kitchen Public House's Jason Rex back. "We noticed an impact when we didn't participate," says Rex, who participated in 2015 with his former Scratch restaurant in Coeur d'Alene. He's particularly impressed with the amount of promotional literature provided to restaurants, he says.

Collective Kitchen has reprised their 18-hour smoked brisket mac and cheese, which they debuted at a recent Coeur d'Alene mac and cheese tasting event. It's one of three choices for $21, which also includes appetizer and dessert.

No surprise that during the 2017 "Restaurant Wars" in Spokane, Palouse Bar and Grill won the Gastropub category, as well as the popular vote by attendees and judges alike. The Grill is located in the former South Hill Anthony's spot and is known for being a little bit outside-the-box, like their watermelon steak salad and fondue.

Speaking of cheese (they're big fans of WSU's Cougar Gold here), for Restaurant Week, they're topping flash-fried cheese curds with salted caramel, sautéed bacon and jalapenos for an appetizer choice, or save your cheese consumption for their Cougar Gold Mac 'n' Cheese topped with pork shoulder, grilled chicken and Washington apples.

Although their third course is tempting — cold milk and warm cookies or spiced chocolate bread pudding — so is their suggested drink (not included in the Restaurant Week price): Palouse Apple Pie Tuaca, One Tree Cider, whipped cream, nutmeg and apple garnish.

If this downtown location looks familiar, maybe you've visited when it was Herbal Essence. It's still got the fishtank and a European-American bistro feel, yet there is more local art on the walls and more vegan and gluten-free choices on the menu, like the Ghostfish Grapefruit IPA they're recommending as an add-on to their menu.

Taste the renewed emphasis on seasonal and local ingredients, with entrees like herb-braised beef short ribs with a green-peppercorn red-wine pan sauce, scallop potatoes and fresh vegetables or marinated chicken baked with Gorgonzola, provolone, and bacon and served with Yukon Gold mashed potatoes and sauteed vegetables.

Now that they're Restaurant Week veterans with their Downriver Grill, co-owner Darrin Gleason and partners are bringing their pizza place into the fold. Republic Pi, which is actually one of two pizza places run by this busy group (the other is the Flying Goat), demonstrates that any cuisine is fair game for Restaurant Week. Try one of three pizzas like the 30th Off Grand with red sauce, Italian sausage, pepperoni, cured ham, and a cheese blend. Republic's suggested pairings include Downriver Grill's Dry Fly cocktail and the Flagship IPA from Spokane's own Perry Street Brewing.

Make the most of it with one of these custom itineraries

How Second Harvest uses your donations to feed the Inland Northwest

This year's Restaurant Week includes more Idaho eateries than ever

Inland Northwest attractions if you're coming from out of town

How to match your beverage of choice (beer, wine and spirits) with your meal