that came out three weeks ago. The audit fulfills a recommendation from the Department of Justice report in 2014. And by fulfills, I mean that they checked the box — because all it deserves is, again, my side-eye.
click to enlarge 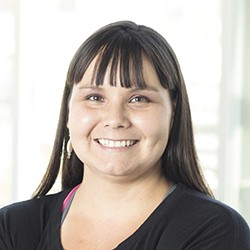 This was an underfunded effort to appease the Department of Justice and the community by using a flawed methodology and the Doctoral Program in Leadership Studies at Gonzaga University. In the introduction of the audit, the authors admitted its limitations: There wasn't enough time or money to reach out to a larger group of interviewees for a more reliable sample. I can't claim to be a data guru but with such a limited sample pool from both the department and the community, how can anything helpful be produced?

And shouldn't we expect a study to provide answers or conclusions? This audit fails to do that on every level. It fails to identify ways in which minorities like women and people of color experience the "culture" at SPD within the department, and outside of it. It fails to provide an authentic voice regarding how SPD takes up space in Spokane — both the good and the bad. And it fails to recommend pathways for improvement.

From reading the audit and seeing the press conference, I gathered that SPD believes, in general, that it is hardworking, honest and trustworthy. I'm glad you feel so good about yourselves, guys. I'm pretty sure that wasn't what the Department of Justice had in mind when they recommended a cultural audit; rather, they were hoping for brave reflection and an honest inventory of SPD culture.

The audit also states that there needs to be more minorities in SPD leadership positions — which everyone already knew. But then at a press conference, the audit's lead investigator, Dr. JoAnn Danelo Barbour, said the reason that the few minorities in the department were not promoted is because maybe they don't know how to get promoted.

I don't know what I'm more upset about: That the big takeaway wasn't that the SPD needs to hire and retain more women and people of color, analyze more data, engage in authentic discourse with different cultural groups, and have a brave conversation about use of force. Or that the lead investigator stated in public that the few employees of SPD who are women and/or people of color don't have barriers to promotion; rather, they don't know how to get promoted. The assumptions wrapped up in that comment are painful and patently untrue. The narrative that people of color and women are to blame for the way the system treats them perpetuates the system of oppression across our community, and it needs to stop.

Now, I get it: At least they did something. But doing something by half-measures is a waste of our tax dollars and time. Just stop patronizing us, because Spokane deserves better — and quite frankly, the police department also deserves better. What we want as a community is for our police department — and our Police Guild — to make the necessary changes so there are no more sexual assault charges, no more abuses of power, no more cover-ups, no more racial bias, and no more citizens dying at the hands of our law enforcement.

Is that really too much to ask? (Don't make me side-eye you again.) ♦

Tara Dowd, an enrolled Inupiaq Eskimo, was born into poverty and now owns a diversity consulting business. She is an advocate for systemic equity and sees justice as a force that makes communities better.

A Legacy of Violence

A Letter to Rachel Dolezal