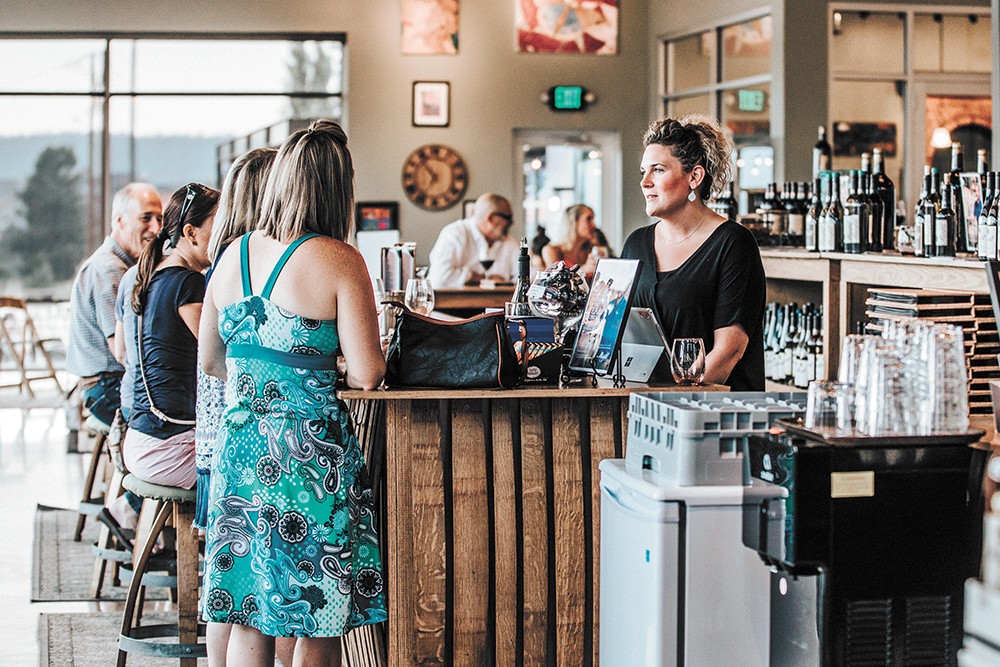 As of this fall, wine enthusiasts who stop into Maryhill's downtown Spokane tasting room can not only enjoy a flight, glass or bottle, but also a diverse menu of complementing food from longtime Spokane chef David Hill.

The winery's new menu created by the former chef-owner of Hills' Restaurant, which closed earlier this year, was introduced to offer guests an easy option for food that didn't require them to leave the winery and head somewhere else, says Richard Jacobs, a tasting room employee.

"There's tons of really, really nice restaurants around us... so people come into this neighborhood expecting to eat," Jacobs says. "It didn't make sense to us to have people going all over if we can provide a nice level of food, too. So we decided to open up a full kitchen."

Previously, Maryhill offered a limited selection of food to purchase on site, but had allowed guests to bring in outside food during regular hours.

The new menu is now being served at all of Maryhill's Washington state locations; three in total along with its newest opening in early November in Woodinville, Washington.

Jacobs says the menu's seafood focus is a nod to the fact that three of the four tasting rooms are located on waterfronts. (CHEY SCOTT)

Cosmic Cowboy Grill, a Coeur d'Alene eatery known for its health-conscious, Southwestern-inspired menu, is heading to the heart of downtown Spokane. The restaurant announced via Facebook last week that it plans to move into a space recently vacated by Tortilla Union, located on the first level of River Park Square, between Nordstrom and Williams Sonoma.

In a video on the restaurant's Facebook page, owner Steve Eller says the Spokane location is slated to open in January, and will feature the same menu served in Coeur d'Alene, in addition to a full-service bar. (CHEY SCOTT)

It's been the place to go for St. Patrick's Day since opening more than 15 years ago, and one of the few local joints in Coeur d'Alene's up-and-coming East Sherman District to host live music. But, sadly, O'Shay's Irish Pub & Eatery has closed its doors. No more fish and chips or corned beef and cabbage while the Coeur d'Alene Firefighters Pipes and Drums made the rounds, nor the lively banter spurred on by whiskey or Guinness. And no more live music like Deep Roots with master fiddler Arvid Lundin. The group, which plays eclectic Celtic music, played at O'Shay's for around 10 years, including for closing night at the end of September.

"Most nights it was fun," says Char Beach, who sings and plays the harp and bodhran. "We often got the audience singing along and [owner] Steve Saunders was often quick to raise his glass for an Irish toast and include the house."