Chef Josh Pebbles' story is a familiar one: He started as a dishwasher at age 14, working for "20 bucks a night and a hamburger," he says, nonetheless realizing he'd found where he belonged. By 18 he was at Café Borrone, a venerable Italian café near Stanford University, where he cemented a fascination for Italian cuisine that has carried him from California to Italy to Coeur d'Alene, where he now serves as executive chef at Vine & Olive.

"It was the whole mentality of using only the best ingredients," says Pebbles, who traveled to Italy in 2013 and wound up spending two years there. "And they take such precision and care in absolutely everything they do."

Pebbles had been reading the book Heat, by the New Yorker's Bill Buford, who left his writing job to live in Tuscany and work in Mario Batali's kitchen. In that spirit, Pebbles departed for Modena, Italy, to pursue authentic experiences.

While wandering around Florence's Piazza della Signoria, Pebbles stumbled upon what is now one of his favorite dishes: Meatballs. "It was so simple but everything was just perfect," says Pebbles, who remembers heading straight to the butcher to get pork so he could try replicating the dish.

Another serendipitous encounter resulted in an apprenticeship of sorts that redefined his approach to pasta and charcuterie. He'd gone to one of his favorite places to eat and asked where he might learn to make pasta. The answer was Osteria Francescana or Hosteria Giusti, both Michelin-starred restaurants.

After two years at Hosteria Giusti, a restaurant and salumeria — which translates to maker of cured meats — dating back several hundred years, Pebbles returned to California, where he opened the short-lived, dinner-only Borrone Market Bar. Divorce sent him south to Los Angeles where he, like Restaurant: Impossible's Robert Irvine, stepped in to revive a restaurant, the Tart, part of Farmer's Daughter Hotel.

Then, Pebbles took a year-and-a-half break. He migrated to AR Cucina in Culver City, California, to become chef de cuisine for owner Akasha Richmond, formerly megastar Michael Jackson's private chef. Still, he was restless and casting about for a new challenge.

As he did with other restaurants, Pebbles spent time working among the staff and slowly integrating specials into the menu. He's particularly excited about one complex menu item: diver scallops with celeriac puree, Sicilian eggplant caponata, crisp kale with grappa-infused grapes, Aleppo peppers and preserved lemon puree ($26). Pebbles has also been working on a new lunch menu and the wine dinners for which Vine & Olive is known. 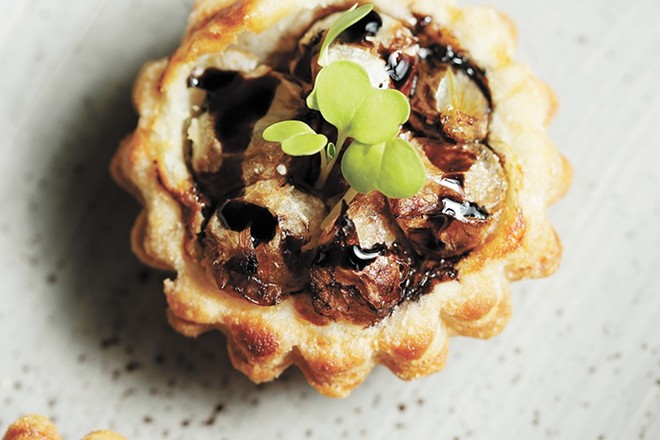 This elegant, yet simple, savory French dish is a variation on the classic tart in which the ingredients — in this case onions — are caramelized along the bottom of the dish while the pastry is baked on top. Pearl onions are small, white and typically sweeter than their larger cousins, and can be found in the specialty produce aisle. Chef Josh uses several 4-inch tart pans but you can substitute ramekins or muffin pans. 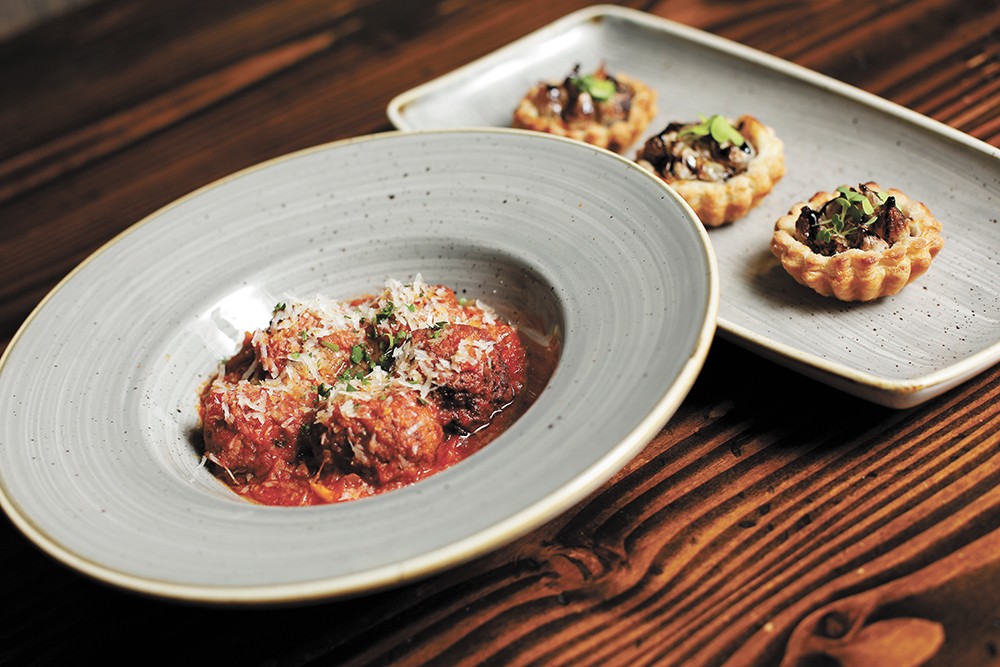 Pebbles says this time-tested recipe is typical of what he'd serve at a party or bring to a potluck. Make any or all of the dish up to several days ahead to minimize time spent in the kitchen on the day-of. The recipe makes 2-3 dozen meatballs, depending on how large they're formed.