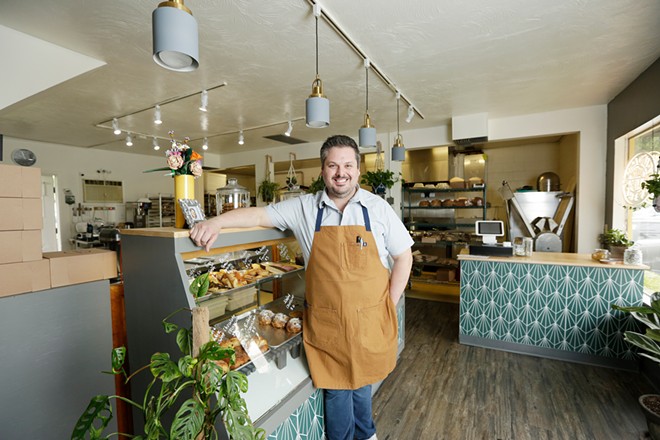 Just a few months after regional culinary pioneer Fery Haghighi closed her catering company and cafe, the doors of the little building on Cowley and Fifth were opened again, this time by her successor.

Chef Ricky Webster — known for his friendly demeanor, a handful of network TV baking competition wins and his prowess for baked goods — took over a lease for the house-like building that formerly housed Fery's Catering, between Sacred Heart Medical Center and Interstate 90. Haghighi, credited for introducing the area to traditional French-style pastries and espresso coffee in the mid-1990s, closed her beloved cafe in late 2021 to finally settle into retirement at the urging of her family.

While Webster had always planned to expand his cheese- and bread-centric shop Rind and Wheat, located at 1516 W. Riverside Ave., he was unsure of when or how. Then, news of Haghighi's retirement was casually mentioned.

"We've been trying to hustle at Rind and Wheat," Webster says, "and my original business model entailed more, but we were limited" due to space.

"Fery and I were at Terrain Table [event in summer 2021] and we started talking, and I was talking about the rent I pay at the current spot, and she said, 'You can rent mine for much cheaper,' and she explained that her kids want her to retire — she's almost 80 — and it planted the seed."

Webster waited first to see if the Haghighi family got any offers to buy the business, but by the end of November last year, it was settled that he'd take over the lease and expand Rind and Wheat's capabilities by moving into the space. Morsel opened in April, a year and a half after Rind and Wheat.

"I am very grateful, and it's very humbling for her to have such a fondness for me. There is a kindred spirit there," Webster says. "She brought hand-laminated pastries to Spokane, and I think she maybe wanted to see a newer rendition of that."

While Morsel is significantly larger than Rind and Wheat, allowing him to expand production capacity for his sourdough bread and pastries, plus a new lunch menu, Webster wanted to create a distinction between the two locations.

Cheese and wine remain only available at Rind and Wheat, and that lunch menu of hot and cold sandwiches, soup, salad and sides are only served at Morsel in a takeout format.

"You can place an order online or call and get a hot lunch in five or so minutes — that is the goal, and it's happening slowly but surely," Webster says, noting that he's already seeing lunchtime traffic pick up from nearby medical offices.

Webster has also split his pastry selection between the two locations so that each feels like a unique experience for customers. Danishes and scones, for example, are only sold at Morsel, and Rind and Wheat is the only place to get his popular breakfast pizza.

"People have a reason to go to both," he says.

Webster's signature sandwich at Morsel is the Riverfront Parq ($15), an homage to his Portuguese heritage. (Parq is the Portuguese word for park.)

"I grew up eating that sandwich, a linguica sandwich on Christmas Eve, with mustard on a French roll," he says.

The sandwich was originally introduced at a pop-up collaboration with Inland Curry's Noreen Hiskey, and proved so popular it sold out twice. Complementing the mildly spicy pork sausage is a pillowy-soft papo-seco, or Portuguese-style roll, spread with piri-piri spiced mustard and caramelized onions.

"The bun is crispy on the outside and makes it really craveable with a nice contrast in textures, and it's topped with the grilled onions to give it another level of comfort and flavor and deliciousness," Webster says.

Other sandwich names include Garbage Goat (pork belly and ham), the Greenbluff (an all-veggie combo) and the Manito (salami).

"I wanted to celebrate Spokane and have fun with the names because we're already punny in our marketing," he says.

The Greenbluff ($16), another bestseller, is a sandwich Webster originally created at his home during an interview with local social media influencer Chandler Baird of SpokaneEats.

"I made that for her with items in my garden, and she loved it so much," Webster recalls. "[That] meant something to me, as far as moving to Spokane" five years ago.

Young Kwak photos
A sampling of pastries and a Riverfront Parq sandwich at Morsel.

Each sandwich is made to order and comes with a choice of side: roasted root veggies, bean salad or pesto pasta salad. Morsel's menu also includes avocado ($10) and ricotta ($9) toast, and a Portuguese brunch bowl ($15) packed with tomatoes, bell pepper, onion, garlic, fried egg, ricotta and griddled focaccia bread, with a choice of linguica sausage or avocado. Rotating soup by the cup ($8) comes with a house baguette.

Morsel serves coffee from the local Roast House Coffee. Pastries and baked goods vary in availability by the day. An overview of rotating and regularly available pastries are listed on Rind and Wheat's website, where customers can also place preorders for pickup at Morsel.

As he settles in at Morsel and begins to partner more with local growers, Webster hopes to expand seasonal offerings that highlight locally grown fruit, veggies and more.

"Again, it's the same model at Rind and Wheat, working with local and celebrating the local grain and produce; the local farmers and people who make this area tick," he says. "If we can sustain creativity and supply that, that's the win in it all." ♦

The original print version of this article was headlined "Another Bite"