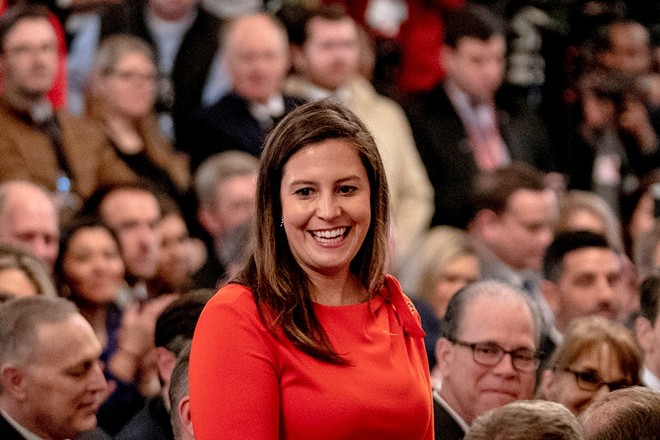 Anna Moneymaker/The New York Times
Rep. Elise Stefanik (R-N.Y.) stands as then President Donald Trump recognizes her for her work during the impeachment hearings at the White House in Washington, Feb. 6, 2020. House Minority Leader Kevin McCarthy (R-Calif.) on Sunday, May 9, 2021, officially endorsed Stefanik in her bid to oust the No. 3 House Republican, Rep. Liz Cheney (R-Wyo.).

WASHINGTON — In the hours before facing a vote that will almost certainly purge her from House Republican leadership, Rep. Liz Cheney of Wyoming remained unrepentant Tuesday, framing her expulsion as a turning point for her party and declaring in an extraordinary speech that she would not sit quietly by as Republicans abandoned the rule of law.

Delivering the broadside from the House floor on Tuesday night, Cheney took a fiery last stand, warning that former President Donald Trump had created a threat that the nation had never seen before: a president who had “provoked a violent attack” on his own Capitol “in an effort to steal the election,” and then continued to spread his election lies.

“Remaining silent and ignoring the lie emboldens the liar,” Cheney said. “I will not participate in that. I will not sit back and watch in silence while others lead our party down a path that abandons the rule of law and joins the former president’s crusade to undermine our democracy.”

Her defiant exit — and unmistakable jab at the House Republican leaders working to oust her — illustrates Cheney’s determination to continue her blunt condemnation of Trump and her party’s role in spreading the false election claims that inspired the Jan. 6 attack on the Capitol. On the precipice of the vote to remove her Wednesday, she has embraced her downfall rather than fight it, offering herself as a cautionary tale in what she is portraying as a battle for the soul of the Republican Party.

“I think Liz understands it’s not worth selling your soul for No. 3 in the minority,” said Barbara Comstock, a former Republican congresswoman from Virginia and a friend of Cheney’s. “She’s just not going to do that.”

Cheney’s remorseless last stand — and the chilly reception it received from House Republicans, who cleared from the chamber as she began her remarks — also highlighted how Republican leaders, even in their eagerness to rebuild their party after the riot and Trump’s stormy departure from the White House, have tethered themselves to his election lies as a matter of survival.

As a replacement, leaders have united behind Rep. Elise Stefanik of New York, a onetime moderate whose fealty to Trump and backing for his false narrative of a stolen election have earned her broad support from the party’s rank-and-file.